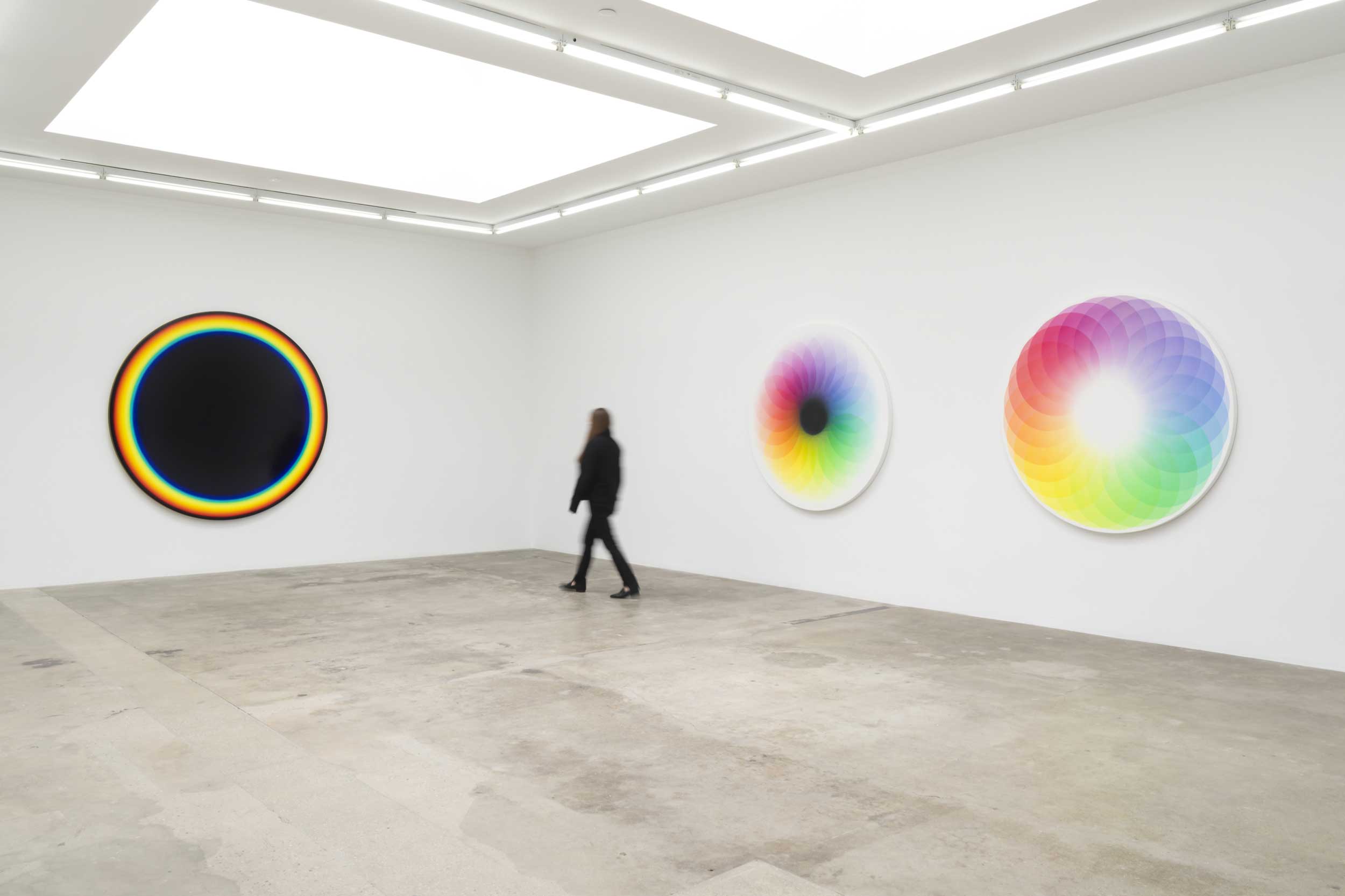 Your Light Spectrum and Your Presence – The Brooklyn Rail

Olafur Eliasson’s last exhibition at the Tanya Bonakdar Gallery in Hollywood, California, Your light spectrum and your presence, navigates through cerebral modulations of color that suggest the theatrical nuances of illusion. Each work acts as a portal, a time capsule or an opening of spectral phosphorescence. Acrylic paintings made with loose, free-floating glacial ice come across as interfaces of climate awareness, while her “color experiments” read as throbbing orbits of light and dark. Eliasson also investigates the enigmatic color palettes associated with the rainbow as a form of interpreting eye-centered perceptivity. Plato also highlighted sight, but in our world of multiple forms or readability, is “seeing” really believing?

Throughout the exhibition, works in oil on canvas evoke a trompe l’oeil effect. At an immediate glance, the number of layers in each painting isn’t quite as apparent, but their complexity peels off like an onion, like in a tripped experience. Eliasson’s black, surrounded by rainbows, Color experiment no. 101 (2020), scatters reflected light as an artificially synthesized plane. The oil-painted, mirror-like surface metaphorically enhances the viewer’s indulgent gaze, but also allows for proprioceptive sensation through the viewer’s back-and-forth bodily movements. Eliasson succeeds in communicating light in darkness, however, I wonder if this body of work articulates darkness as the presence of abundant color.

In Color experiment no. 105 (2021), two oil-painted rainbow-colored wheels wrap around each other like rotating objects of light. The inner color wheel resembles a cone at its center with hues emanating from an internal focal point. Blending and creating an ever-flowing bloom of color, filling in every hue in between, is a lesson in patience. Color preference is personal, and looking at this piece I find myself drawn to the deepest blue and green hues. Humans are thought to be evolutionarily predisposed to have a preference for colors associated with the natural world. This opens the question: what mechanisms, environments or predetermined factors define color preference?

The color palette of Color experiment no. 108 (2020) is based on photographs taken by Eliasson in Iceland. A piece of free-floating glacial ice from the Nuup Kangerlua fjord in Greenland, mixed with a trace amount of colored pigments, melts onto the surface of the acrylic paint. The result is a puddle that appears to float above the surface. The work is intended as a commentary on the impact of humanity on the environment, a metaphor for the melting of glaciers, which cause a rise in sea levels. In addition, this work suggests a visual ecological footprint. The unrecognized actor that melts the ice is humanity; as we do not see the artist’s hand, this reinforces the opacity of climate change, which is not only imminent, but also irreparable – who makes the mark?

Eliasson finds significant inspiration in the romantic masters JMW Turner and Caspar David Friedrich. At Friedrich’s Der Wandererüber dem Nebelmeer (The wanderer above the sea of ​​fog) (1818), is a respectful encapsulation of the sublimity of man in the face of his precarious position in relation to the modern world; Eliasson’s play is also inspired by humanity’s helplessness in a world under its deceptive control. Color experiment no. 87 (2019), is a disc-shaped oil painting that investigates the aerial perspective and dematerialized landscape of Friedrich’s composition. A tangible circular space in the middle of the room reveals the crisp white gallery wall behind it. Is the architecture on display part of the work, or is the work part of the architecture? As a unique piece in the exhibition, the work also pays homage to the autonomous figure depicted above the fog in Friedrich’s lionized painting.

In Brightness measurements: Reykjavik, March 20, 2011, 1:00 p.m. GMT (2012), Eliasson records the change in frequency of light in the capital of his native Iceland. Each richly painted circular oil on canvas features a hint of rainbow emanating from a central oculus, surrounded by shifting streams of darkly discernible dark tones. In an effort to capture the wavelengths of light throughout the movement of the day, Eliasson draws a connection to the Californian light and space movement, specifically the “Skyspace” works of James Turrell. While Turrell shifts light patterns through optical phenomena, Eliasson transmutes the light on the canvas, in an attempt to capture its earthly inevitability.

Your light spectrum and your presence exalts a passion for the ineluctable and primordial temporalities of human vision. Since the dawn of the industrial revolution, the potential insurmountability of climate change has been linked to the struggle of man against nature. The idea that the human-made environment is separate from the natural world is misinterpreted and ineffective. Solutions to climate change, if any, require accountability mechanisms. Is there any light in the fog that can penetrate through the shame of our own inaction?