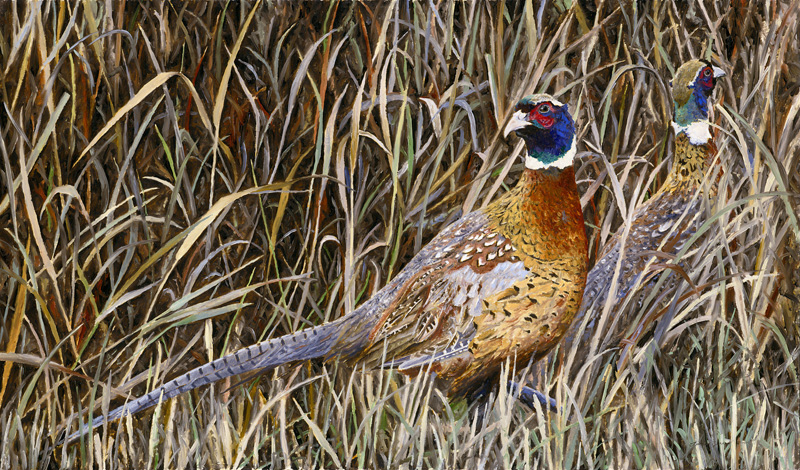 In a recent phone interview with artist Linda Besse, she casually mentioned that among the many adventurous outings she’s taken in search of subjects for her wildlife paintings, she and her husband were once stranded for eight days in a remote area of ​​Manitoba, where the couple had traveled alone to study polar bears in the wild.

After being dropped off by helicopter, Besse and her husband saw their two-day visit stretch to more than a week due to difficult-to-navigate weather conditions. Stuck without cellphone service (but an ample supply of food), Besse made the best of the situation and used it as an opportunity to gather more field sketches, small paintings, and photos of his subjects. planned, and to relax and enjoy the total immersion in nature.

While it may sound like the premise of a drama movie, in reality it was just another day in the life of the award-winning wildlife artist who traveled to every US state, 35 countries and all seven continents. in search of subjects to represent in their natural environment.

Besse is also a skilled landscape painter whose work has won her numerous awards and won her admission to a number of prestigious national art associations, including Oil Painters of America, the Society of Animal Artists, and the American Society of Marine Artists.

Besse, whose history with Martha’s Vineyard dates back to her childhood, has exhibited her island and seascapes at the Louisa Gould Gallery for several years. Now, for the first time, locals and visitors alike will have the chance to see a selection of the artist’s animal paintings up close. The show, aptly titled, “It’s Wild!” presents 13 of Besse’s realistic paintings, including, among others, portraits of zebras, a leopard, an oryx and a giraffe, which she studied during her many treks in Africa (which included a 70 kilometer canoe trip on the Zambezi River in Zimbabwe).

Also included are images of animals captured in their natural environment from locations in North America, the Arctic and elsewhere. The sense of immediacy and intimate familiarity with his subjects elevate Besse’s meticulously rendered portraits far above your average wildlife art.

The artist’s love for the natural world led her to pursue a career in geology. During the time spent earning a bachelor’s degree and then a master’s degree in her chosen field, Besse developed a fascination with wildlife and at some point decided to pick up a paintbrush to capture the subjects that captured her interest. She never looked back.

Besse’s training in geology and her husband’s work as an exploration geologist allowed her access to areas that would normally be off-limits to the amateur explorer. Among her most memorable adventures, Besse has traversed remote tundras in Labrador in search of migrating caribou, been dropped by floatplane into salmon-filled streams to spot grizzly bears in Alaska, paddled 459 miles above the Arctic Circle on the Noatak River and snorkeled with wild belugas in Hudson Bay.

And she doesn’t limit her exploration of nature to exotic locations. Among the works presented in “It’s Wild! show an image of a moose and her calf that Besse encountered in his own backyard (in a very rural area outside of Spokane, Washington), and a spectacular large-scale painting of wild horses roaming the unspoiled plains of Wyoming. This latest image was taken following a private tour of the Pryor Mountains, which took Besse and a professional guide to a remote area accessible only by four-wheel travel suit followed by a strenuous, rock-filled hike . The remarkably muscular stallions, whose coats, captured by the accomplished professional, glisten in the sun, are the descendants of the horses of the Spanish conquistadors. Besse explains that the animals she visited represent one of the few remaining herds of their particular breed to be found in the United States. The spectacular panoramic painting recently won second prize at the American Academy of Equine Artists National Show.

Dedication to his craft prompted Besse to seek experiences that were as authentic as possible. She notes that she prefers to book private African safaris, where she controls the experience. For example, she explains that one of her favorite photos of a leopard came after waiting 45 minutes for the big cat to descend from a tree. On a group tour, the guide would no doubt have advanced rather than hope for a closer look. Instead, Besse was able – and willing – to wait for the moment, while quietly examining his subject from many angles.

Similarly, Besse and her husband once embarked on a 450-mile canoe trip above the Arctic Circle, without a guide or resupply, to see muskoxen in the wild. “I’m willing to take a risk,” Besse said, with characteristic understatement.

Closer to home, Besse has also dived with beluga whales in Hudson Bay and more recently examined manta rays on a night dive in Hawaii. No creature is too mundane to warrant closer inspection by the artist. She painted shorebirds on the vineyard and elsewhere, pheasants and foxes all over North America, and many wild neighbors around her 12-acre property in Washington State, including deer, wild turkeys , coyotes, bears, cougars and moose.

“Wherever I go, I look for my subjects,” says Besse. “A lot of it is about putting down the camera and the sketchbook and just being aware of the surroundings.”

During the exhibition, the artist will be available for two separate meetings at the gallery. Besse clearly enjoys talking about her travels and her process, and she’s clearly a woman with more than a few exciting stories to share.