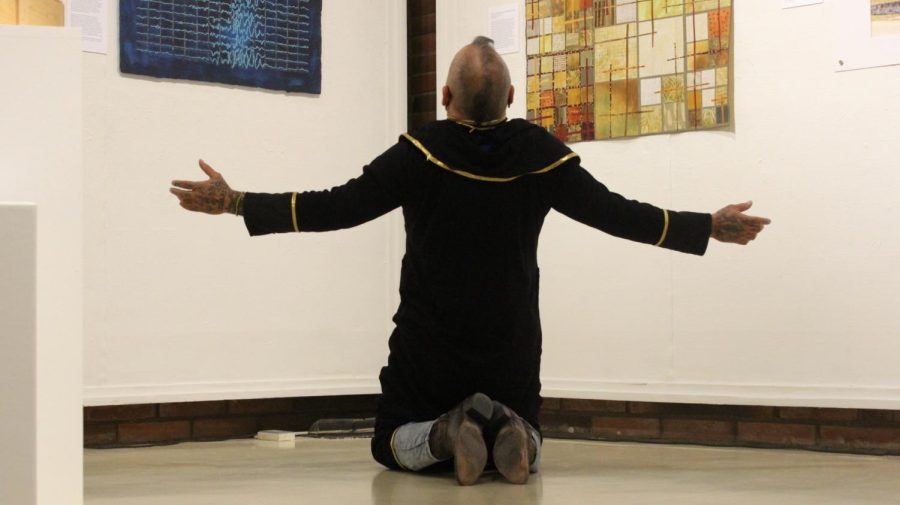 “After a child drowns, we close the well with a clay slab,” said Karla Maravilla, Senior Professional and Creative Writing and English Language and Literature, her voice filled with grief as she read her poem titled “ Dis/membered” to a silently captivated audience. at the Sarah Spurgeon Art Gallery on Thursday, April 7.

Members of the community came together to share and reflect at the artist talk and reception celebrating the exhibition “Where I-90 Meets I-82,” available at the gallery through April 23.

According to Sarah Spurgeon’s director, Heather Horn Johnson, this particular jury show is hosted by the gallery once every two years and the show is an open call for artists from across the country. Johnson said she enjoys the eclectic nature of this work.

The multi-directional artwork was presented to the community at a reception following a presentation by Haub Curator of Western Art at the Tacoma Art Museum, Faith Brower, in Randall Hall 117. She said she chose 62 pieces that evoked the experience of the pandemic, the social justice of this time, and the emotions this time stirs up for so many people.

Brower awarded the show’s top spot to a glass sculpture of a tattered band-aid with the words “do more” written in the middle, called “Do Over Band-Aid” by artist Terri Grant. Brower said this piece reflects the pain and healing needed during this time.

Johnson said she appreciates Brower’s perspective because she “not only encompasses the traditional Western European approach to art, but also knows a lot about these different tribes and tribal cultures.” Many of the pieces are landscapes, but she was also thinking about who originally owned this land.

This objective was carefully linked to the table submitted by the English lecturer Xavier Cavazos entitled “Ceded Land”. The oil painting on found polystyrene depicts the white bones of an elk with red accents on a black background. Cavazos said the exhibit’s name matching its location made him think about how this location sits on “ceded ground.”

“To me, it’s like land being raped and stolen, it’s not an offer of land, it’s an institutional land grab by the government,” Cavazos said. “When I was thinking about what coin to put, I just started thinking that ‘Ceded Land’ is a carcass, it’s the decimation of a people, especially the Yakama nation.”

Cavazos said violations of racism and sexism are often embedded in law and government documents that reinforce that language and bias.

“The way we’ve created reservation systems is often like a fence, controlling movement and also telling a people where to be with the law,” Cavazos said.

The painting corresponded to a dramatic spoken word piece later performed by Cavazos and Maravilla. The performance involved interaction with the audience before the start and was held as a ceremony with the intention of collectively healing trauma.

Handouts titled “Agency Communion” were distributed to event attendees and included a quote from Maravilla: “From rape in the fields, to racism in the workshop, from gender discrimination, to pollution in the lungs, from imperialism in the brain to the body carved into borders, this performance will cleanse the physical and social disease that has culminated in the past three years through traditional folk healing.

Members of the public were given pieces of paper and asked to write down a moment when they were hurt, then asked to tear the paper in half and place the two pieces in a small wooden coffin which was sealed before that Maravilla and Cavazos don’t happen. Participants were tasked with recovering lost agency when these events occurred.

“It’s more than us as individuals in pain, it’s literally a community in pain,” Maravilla said. “The majority of us are pushing COVID, pushing the pandemic, pushing everything aside and I don’t think ignoring everything that’s happened in the last two years is going to solve anything.”

As Maravilla’s somber words swept over the muffled crowd, Cavazos crawled on the ground in front of the sealed coffin, as if fighting a current, unable to move forward, all the while sobbing and screaming in agony, begging for help. helping and grabbing for something in the air above him.

Cavazos said he wasn’t fully present in his body when he played and he reached a transcendent state where he felt the energy of the violations people write about.

“I am in a spiritual and mental place with my body atoning for these transgressions; it flows through me and out of me, through the screaming, the crying, the screaming,” Cavazos said. “It’s the purge of it.”

Samuel Enriquez, a freshman studying painting, said he enjoyed the breadth of work from so many different geographical locations presented at the gallery, especially the performance piece.

“I feel like I had a sense of agony that was important to listen to, important agony,” Enriquez said.

Cavazos said her work centers on healing the trauma caused by sexual abuse and empowering men to process their own transgressions so they can move forward with better intentions.

“I think we need to start creating spaces in these conversations for men to come forward without shame, so they can start working on the processes of correcting this behavior,” Cavazos said. “Men have done a lot of sexual harassment, sexual abuse, trauma – so my work looks at being a victim and then victimizing people as well. In doing so, I think it’s the first moment of Awareness You will never change your behavior if you are not aware of your behavior.

Cavazos said it aims to dismantle systems of objectification towards women and systems of controlling people through force, money and violence. He said he was working on correcting harmful thoughts in his own mind to put this healing into action.

“Healing is possible,” Cavazos said. “Being vulnerable is a tremendous act of courage. The best way I’ve found to inspire people to be courageous is to be my most vulnerable construct at the time, and then to really allow myself to become a vector of crowd energy.

Brower said she hopes this exhibit will “create a space for people to see incredible art that covers a variety of topics and brings people together to reflect on the power of art in difficult times. No matter how difficult life gets, artists still create such powerful and important works.