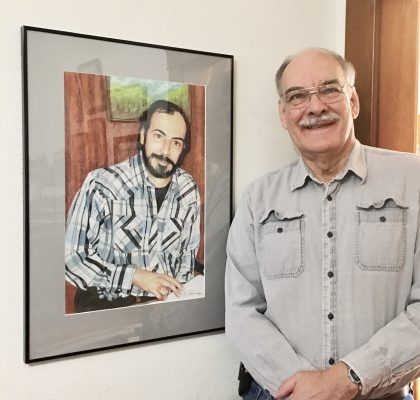 Western Illinois University alum retires from work, but not from creating art

“I’m maybe busier in retirement than when I was working,” said Robert “Bob” Johnson, a 1978 graduate of Western Illinois University’s department of art and design. His 37 years as curator of the WIU Geology Museum came to an end in 2017, but he still has plenty of projects he plans to accomplish. Retirement hasn’t slowed him, or his creativity for that matter, down. He is categorical: to be enjoyable, retirement requires a plan. He was lucky enough to have one: to create more art.

Much like his last days as a retiree, many of his recent works have no particular agenda. Johnson still has some exploration to do and is not attached to any particular style or technique. A medium that he has recently become fond of are pastels and pastel pencils. This technique is similar to airbrushing, a technique he enjoys and taught at WIU’s art and design department for nearly a decade, but is much more effective. While some of the works he created have deep symbolic meaning, “What you see is really what you get with some of these pieces,” Johnson said.

Currently, Johnson is in the spotlight with his new exhibit, “Now and Again: Art Works by Robert Johnson,” which is on display at the Macomb Arts Center through Saturday, February 26. The exhibition is a retrospective look at his art throughout the years, featuring pieces from years ago that have never been on public display. The exhibition contains more than 50 works of art. Asked about an overall theme or connection between the pieces, Johnson said, “I wouldn’t say there’s a theme; there really is no rhyme or reason, just a collection of pieces that I was inspired to create.

Johnson has made many contributions to the University over the years, including serving as curator of the WIU Geology Museum, teaching art classes, as a graphic designer and layout artist for the College of Arts and sciences, as well as the Connections newsletter, and being the faculty coordinator for WIU’s art camp. He has played a vital role in projects such as the visualization sandbox, which allowed WIU students to use virtual augmented reality to better study topography, and a 13-foot model of an ichthyosaur that is now hangs in Tillman Hall, a feat of innovative thinking and design, due to the model creature’s 85-pound weight.

Years later, Johnson still credits much of his success to the faculty of WIU’s art department, particularly professors like Fred Jones, Bruce Bobick, and Dave Kelly. In fact, it was Kelly who suggested that Johnson apply for the position of curator of the geology museum. “I really owe them everything,” Johnson said.

Johnson continued to contribute to the University, even in retirement. His latest effort to help students is to contribute to a scholarship fund established in the name of Jim O’Toole, another Western graduate, a friend of Johnson’s who died in 2018. Johnson made two portraits of O’Toole and proceeds from the sales of both will benefit WIU students through its scholarship fund. Current and future Leathernecks will benefit not only from his talent and the impact he left on the University, but also from his generosity towards their artistic education.

As a lifelong artist, Johnson has some advice for art students or those looking to pursue a career in the field.

“You can do whatever you want if you keep applying yourself,” he said. “Things won’t happen if you don’t work for them.”

The MAC gallery is open from 12 p.m. to 3 p.m. on Tuesdays and Wednesdays, from 4 p.m. to 7 p.m. on Fridays and from 11 a.m. to 3 p.m. on Saturdays. The gallery is located at 25 East Side Square in Macomb. There are no admission fees. At this time, all visitors are required to wear masks.

Sean Leary is a writer, director, artist, musician, producer, and entrepreneur who has been writing professionally since he started at age 11 in the pages of the Comics Buyers Guide. A graduate with honors from the master’s program at the University of Southern California, he has written more than 50 books, including the best-selling books The Arimathean, Every Number is Lucky to Someone and We Are All Characters.

Holidays in Holy Week, give yourself the opportunity to visit the magical towns of Coahuila