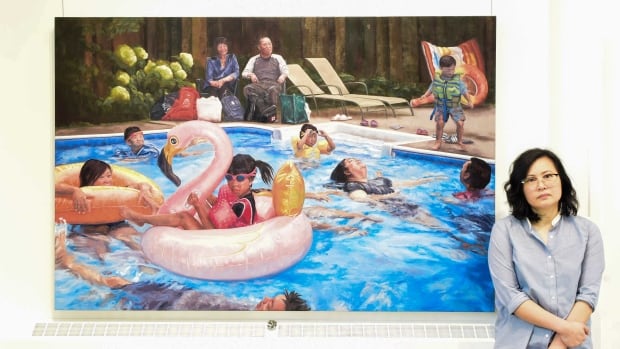 When artist Chrystal Phan worked at the Royal BC Museum in Victoria, she said she was disappointed that her fellow Vietnamese Canadians were not represented in the museum’s 2017 exhibit on families.

Five years later, she is doing her own solo exhibition, hoping to help the public better understand her community.

Phan, also an interior designer, received a Canada Council for the Arts grant in 2020 to create six large-scale oil paintings, now on display in the Chapel Gallery at St. Matthias’ Anglican Church.

The show, titled Once For A While, depicts the immigration experiences of Canadian Vietnamese families and runs from January 21 to February 6.

Born in Victoria to refugee parents, who arrived in Canada in 1980 after fleeing their hometown of Sóc Trăng in southern Vietnam, Phan says she was unaware of issues of identity and belonging when she was child.

But the 40-year-old says looking back, she found it difficult to fit in with Victoria’s predominantly white population.

“I remember in elementary school, a teacher paired me up with a Chinese girl a few years down, so I could speak Cantonese with her…I’m not Chinese. The rest of the afternoon has been an awkward silence,” she said on CBC. All points west.

“Today a teacher would be forgotten if they did something like that, but back then things like that happened all the time,” she continued.

“It was awkward, but it was okay to be a minority.”

Phan says the challenges Vietnamese newcomers face in integrating into Canada became clear when she visited the exhibition Family: Bonds and Belonging at the Royal BC Museum, where she worked as a major gifts manager.

“I was browsing through this exhibit and realized my family wasn’t there,” she said. “I spoke to the chief curator of that exhibit at the time, who told me that many of their artifacts had been donated and simply had no connection to [Vietnamese] communities.

“It wasn’t just about a lack of representation for me – it was more about this lack of connection and fitting into the community.”

In one of his rooms, my still life, a Vietnamese-Canadian family is seen eating hot pot, spring rolls, chicken wings and slices of watermelon around a table.

” At the very bottom [of the painting], there’s a little girl who’s upset that represents me as a child, and I’m upset because I couldn’t eat the food on the ancestral altar… it was spirit food.

“I was too scared to ask when I was a kid, and asking anything like that was discouraged in my house,” she said. “I try to show this universal experience… how traumatic every little disappointment is for a child.”

“It’s absolutely delightful. It’s incredibly intimate and engaging work,” Rendell said. “People will find themselves immersed in this immigrant experience in a way that they have never been immersed before.”

Phan says she also visits local schools to show newcomer children how to explore their cultural identities through art.

“After those kids got to see how I went through this [artistic creation] process, they can do a similar process for themselves and create artwork around their own immigration family history,” she said.

Federal prosecution of a police chief, continued search for superintendents and restoration of the Everglades