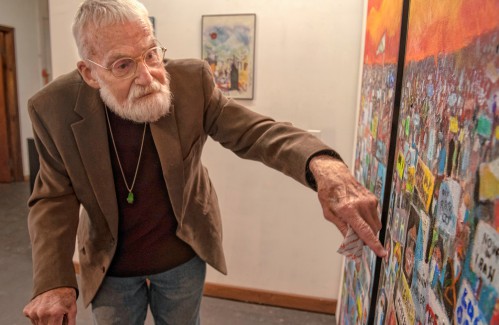 When he talks about his friend Charles Miller, Michael Tillyer has several ways of describing the work of the iconic painter from Northampton: It’s immediate, says Tillyer, and it’s honest, energetic and rhythmic.

â€œThere is rhythm,â€ says Tillyer, founder and co-director of Anchor House of Artists in Northampton.

Additionally, says Tillyer, Miller brings a lot of compassion to his paintings, a concern for ordinary people and the injustice they may endure at the hands of more powerful forces, all based on a keen sense of observation. As Tillyer puts it, Miller “keeps an eye on the world.”

This is something Miller has been doing for many years now. The veteran painter recently celebrated his 90th birthday, and Anchor House is celebrating with him, with an exhibition of some of his latest works, titled “Protest at Ninety: Charles Miller”.

This is an intimate exhibition, built around a series of preliminary drawings and smaller paintings that Miller made in preparation for two large oils, both of which bear witness to the mass protests in the United States in recent years. – on environmental issues such as climate change, sexual harassment and assault on women, the murder of George Floyd and police shootings of African Americans.

â€œSo much has happened,â€ Miller said in a recent interview with Anchor House. “I watch the news, I read the newspaper and sometimes I can’t believe what I’m seeing.”

The new exhibit is just the start of a retrospective series of shows about Miller that Anchor House has planned. To recognize his long career in the valley’s artistic community and his 90th birthday, the gallery will exhibit the artist’s previous work each month until much of 2022.

â€œCharlie was already a big figure, both as a painter and a musician (jazz drummer) when I first came to the valley,â€ said Tillyer, who has exhibited Miller’s paintings at Anchor House for a decade. â€œAt first I had this idea that he was a bit inaccessible, but then I got to know him, which made me appreciate his work even more. Now we can kind of re-familiarize people with what he did.

Miller, born in Connecticut in 1931 at the height of the Great Depression, moved with his family to Portsmouth, New Hampshire in 1937, where the coastline, he says, had a big effect on his creative vision. He graduated from the New England School of Art in 1955 and later “worked at a lot of jobs paying the rent and feeding the beast,” as he puts it, before moving to Northampton in 1973, where he became member of the â€œRenaissanceâ€ of the 1970s and 1980s, during which artists and new businesses helped revitalize the city.

Before starting his most recent work, Miller said, he had worked on landscapes and seascapes. But he was struck by the growing number of American citizens taking to the streets, like the Women’s March in Washington (and other women’s marches elsewhere) after Donald Trump was elected president, as people protested against what many saw as Trump’s anti-women statements. .

Then there were protests against pipeline projects in the Midwest and other environmental threats. Miller shifted gears: he says he started sketching a series of drawings of protesters, then added some small studies along the same lines to acrylic paint.

He used this preliminary work to develop ideas for the first of his two new oils, a tall, narrow piece that features a dense knot of people holding handmade signs. Above them is a beautiful but somewhat ominous red and orange sky.

“We Can Still Fix This” reads a sign carried by a protester, a reference to a short video created in 2019 by Swedish climate activist Greta Thunberg and another environmentalist. â€œSave the sea turtles now,â€ says another, while a third sign, in dripping red letters, simply reads â€œHOTâ€.

â€œI loved that so many people, especially young people, stood up for the planet,â€ said Miller, who has been a fan for years of a webpage where you can observe bald eagle nests in Turners Falls.

Then, he says, the pandemic came “and everything changed. The whole world has changed. Now everyone is wearing a mask.

Miller entered a second oil painting full of protesters, but this one looks more ominous, with people now wearing face masks; some carry signs Black Lives Matters or referring to the death of George Floyd. Another panel features the face of Breonna Taylor, the young African-American woman gunned down by police last year in Louisville, Ky., When several police officers broke into her apartment as part of a drug investigation (the Taylor’s family received $ 12 million in damages in the case, and an officer was fired).

In the foreground of the painting, watching the crowd of protesters, looms a dark, hooded figure resembling the Grim Reaper. â€œI don’t know where this came from,â€ Miller says. “Sometimes things come out of your brush … you just have to follow them.”

It could be an unconscious nod to what Miller says is his “real concern for the future of our democracy.” His paintings also contain references to Barack Obama’s 2008 campaign slogan “Yes We Can” and the death of the late US Supreme Court Justice Ruth Bader Ginsburg. There is also a nod to the pervasive gun violence. Overall, the mood seems to get darker from his first oil painting to the second.

Yet the colors, scope and energy of the paintings – they are presented as an unrelated diptych – provide a more positive vibe. Miller, whose work can be very detailed, here uses simpler, earthy images and paintings with broad strokes to make it seem like ordinary citizens are fighting for a more equitable, less violent, and more environmentally friendly country. .

There are also a few flashes of humor in the show: A smaller painting shows protesters holding a long horizontal banner that reads “WTF?

In an artist’s statement, Miller writes, â€œThe major events of the past few years have moved me deeplyâ€¦ the protesters, BLM, Me Tooâ€¦ I wanted all the signs and slogans to be crude and vulgar, but readable. Remember, these are just ordinary people who use cardboard boxes, masonite, and house paint. [They used] whatever they could get their hands on, but all the signs come from the heart and that is the main thing. “

Miller used canvases from the past to call for justice and greater humanity. A set of paintings depicts the plight of Kurdish refugees fleeing the genocide of former Iraqi leader Saddam Hussein; another series, “Stations of the Cross”, presents the painful and violent way of Christ to the cross, but in a gritty urban environment around 1970.

â€œCharlie takes pleasure in so much in the world and in his wealth,â€ says Tillyer. â€œHe also points out what’s wrongâ€¦ But he has a lot of compassion and hopes it can become a better place. “

To learn more about â€œProtest at Ninetyâ€ and other shows at Anchor House, visit anchorhouseartists.org.

Steve Pfarrer can be reached at [email protected]