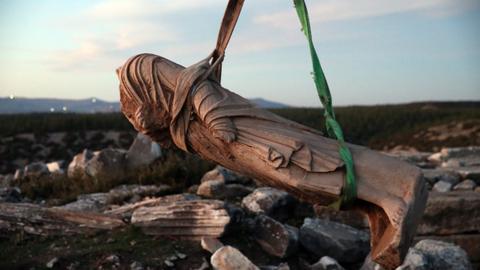 Two marble statues were discovered in the ancient city of Blaundus, located in the present-day Ulubey district of Usak province in Turkiye.

The statues were discovered on December 9 around a temple dedicated to the Greek mythological goddess Demeter.

The team had discovered two statues in the courtyard of the temple in the center of the city, said on Saturday Birol Can, a faculty member in the archeology department at Usak University.

“We do not yet know if the statues come from the temple site or from honorary objects on the street side,” said Can, the archaeologist who is leading the excavation, adding that further research on the finds was underway.

“Both finds are male marble statues. We have yet to determine who they are – whether they are gods, emperors or statesmen.”

The site of the discoveries, the ancient city of Blaundus (or Blaundos), was first built by Macedonians who came to Anatolia, present-day Turkiye, following the military campaign of Alexander the Great.

The ancient city, located in what is now the Ulubey district of the province of Usak, was later occupied by the Romans.

Noting that the statues may have been inspired and created in the style of the Roman era, Can said: â€œWe can say that the art of sculpture has been at its peak since the second half of the 4th century BC.

Excavations to unearth the city began in 2018. Archaeologists are currently focusing on the area where the temple of the goddess Demeter is located.