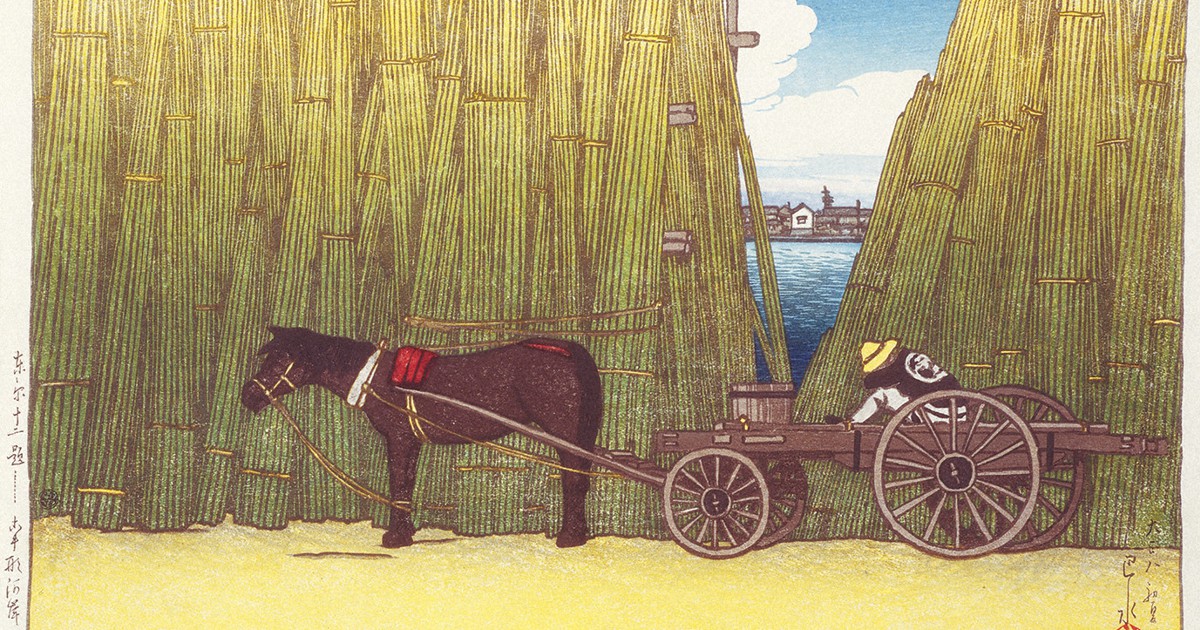 TOKYO – “If you asked me what I like, I would immediately answer ‘travel’.” These were the words of 20th century woodcut artist Kawase Hasui, who captured everyday landscapes across Japan. Although his works have been compared to those of the master Edo ukiyo-e Utagawa Hiroshige, the subjects and methods of his prints also deviated from tradition, sometimes in bold ways. An ongoing exhibition in Tokyo allows visitors to follow in the footsteps of the traveling artist.

â€œKawase Hasui: Travel and Nostalgic Landscapeâ€ is currently being held at the Sompo Museum of Art in the Shinjuku district of Tokyo until December 26th. as well as ordinary scenes and people he encountered on his travels that stretched from Japan’s northernmost Hokkaido Prefecture to the Kyushu region in the southwest of the country. The current exhibition features some 280 of the more than 600 works produced by the prolific artist during his lifetime.

“Mishima River, Mutsu Province”, from the Travel Memories I series – Hasui’s first series of works based on his travels in Japan – depicts a night scene in an area of â€‹â€‹northern Japan that is now the prefecture of Aomori. The print shows the back of what appears to be a mother and child filling barrels with water, and a woman balancing on a pole on her shoulder in the foreground. Natural elements, including bodies of water and the moon, which frequently appear in the artist’s works, were already used in this first piece, and Hasui said he was interested in “the particular buildings imbued with ‘a rich local color “.

Hasui also depicted anonymous views of his hometown of Tokyo and is said to have chosen casual everyday scenes for his sketches based on his own preferences, in addition to famous locations. In “Komagata Embankment”, from the Twelve Scenes of Tokyo series, a worker takes a brief nap on top of a wagon at a bamboo storage site by a river. A store logo can be seen on the worker’s “hanten” coat, and through a small opening between the bamboo trees, viewers can spot a town across the river, with clouds over one. blue sky. Hasui himself also said that watching this scene of “a horse languidly standing next to a napping cart driver really evoked a summer feeling.”

“Dusk at Kiba”, from the same series, shows another type of worker who operates rafts in a lumberyard crossing a bridge to return home. The print captures the moment when a blue sky gradually transforms into a beautiful shade of pink and red on an early winter evening.

Hasui is often compared to the painter Edo ukiyo-e Utagawa Hiroshige (1797-1858) for his depictions of sites encountered while traveling. Hasui embarked on a journey to work on a series depicting areas along the Tokaido Highway, which connected Edo, or today’s Tokyo, and Kyoto. This endeavor had previously been carried out by Hiroshige, who is known for the series “Tokaido Gojusantsugi” (Fifty-three stations of the Tokaido) depicting famous views along the same route. As the Edo Painter depicted post stations full of people, Hasui chose to stroll along the route and draw places where he found solace. In â€œOkitsu-cho, Suruga Province,â€ clothes are hung to dry on a line, showing a relaxed snapshot of everyday life at a vacation home in central Japan, now part of Shizuoka Prefecture. Hasui said it was in “the calm” and “the desperate” that he found elegance and apparently did not see himself as following in Hiroshige’s footsteps.

The works of Hasui, who received the nickname “Hiroshige of the Showa Era”, are also said to resemble the works of Hiroshige in terms of stylistic methods. One of these works is the masterpiece “Zojoji Temple, Shiba”, from the Twenty Views of Tokyo series, which is marked by the contrasting elements of the red temple building and the white snow – a combination also seen in a Hiroshige room.

However, Hasui also adopted new and experimental stylistic approaches, which can already be seen in one of his early woodblock prints, “Okane Road, Shiobara”, which depicts the area surrounding his aunt’s house in the current Tochigi prefecture. The artwork deliberately shows the circular traces left by the “baren” rubbing pad used during the printing process. Although leaving such traces is considered a mark of incompetence and rejected in traditional ukiyo-e, Hasui’s works used them as a form of expression.

The Twelve Months of Tokyo series features prints with unconventional circular and square shapes. A work in the series, “Evening snow at the Sanjikken canal”, was completed thanks to the collaboration of the painter Hasui, the “horishi” craftsman who carved wooden blocks from Hasui’s sketches, and the craftsman “surishi” who printed the colors on paper using these wooden blocks.

In an attempt to achieve a more realistic representation, Hasui used lines to express snow, in place of dots, which had been commonly used in earlier ukiyo-e and woodcut work. The “horishi” was given the important role of scraping the carved sections on the block of wood with a scrub brush to make them choppy, creating the impression of a snowstorm. While integrating the skills of several artisans was a traditional woodblock printing technique that Hasui and others sought to revive as part of the â€œshin-hangaâ€ (new prints) movement, the artisans worked together to try experimental techniques.

Although Hasui’s works are primarily based on his trips to Japan, the prints themselves have passed through the United States and other countries. They even found their way into the collection of Apple co-founder Steve Jobs, who selected works from a hot spring and Mount Fuji, as well as a laid-back scene in late fall.

The 1920 series The Mitsubishi Villa in Fukagawa, which represented the Tokyo area comprising both Western and Japanese style buildings and gardens, was sent to the overseas affiliates of the Mitsubishi company.

Hasui also worked on making prints for calendars to be distributed in the United States by Pacific Transport Lines. The Romanized spelling of his name “Hasui Kawase” has been included outside the frame, along with the English title of each work. While popular tourist spots, such as Enoshima Island and Lake Towada, were used for a few months, others depicted unnamed rural landscapes, including a bamboo forest along the Tama River in eastern Japan. Hasui felt in his later years that his works had gained the status of “prints based on sketches that are neither Japanese nor Western paintings.”

Those who visit the exhibition can surely enjoy the places crossed by the woodcut artist whose works have captivated fans all over the world.

The museum’s promotional videos for the exhibition, which contain English subtitles, can be viewed through the following links:

The exhibition “Kawase Hasui: Travel and Nostalgic Landscape”, co-organized by The Mainichi Newspapers Co., will run until December 26, with the first half ending on November 14.

The museum is open every day from 10 a.m. to 6 p.m., except Monday. The museum will also be closed on November 16, before the second stage of the exhibition which will start the next day. There are descriptions in English throughout the exhibit. Some works, including â€œOkitsu-cho, Suruga Provinceâ€, from the series â€œSelected Views of the Tokaido Roadâ€ are only exhibited during the first half of the exhibition.

The entrance fee for adults costs 1,300 yen for online tickets and 1,500 yen for tickets purchased at the gate. Children of school age and under can enter for free.

All visitors are required to make reservations online in advance, and tickets will only be available for purchase at the door when available for each time slot.

The Mainichi is offering free tickets for this exhibition to 5 pairs of people (10 people) residing in Japan. To request a ticket, on a postcard, please write â€œHasui ticketâ€ and enter your full name, address with postcode, phone number and email, and send to: The Mainichi Editorial Office, 1-1-1, Hitotsubashi, Chiyoda district, Tokyo 100-8051. Entries must be mailed no later than November 19, 2021. If the number of applicants exceeds five, we will conduct a draw. The winners will receive the tickets by post, which are valid on any opening day of the exhibition, until December 26, 2021. Online reservations are required separately to enter the venue.