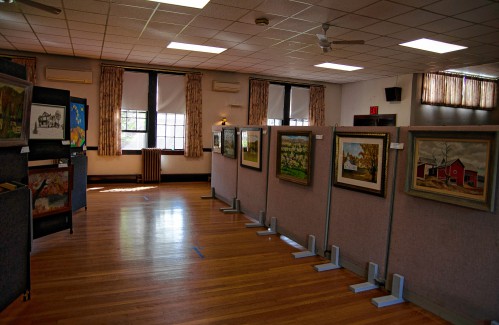 The Recorder – Colrain the inspiration for the weekend art exhibition

SHELBURNE FALLS – The Colrain Historical Society took locals on a ‘walk down memory lane’ with region-themed artwork during its second edition of ‘Colrain on Canvas’ on Saturday and Sunday.

Hosted at the Shelburne-Buckland Community Center, â€œColrain on Canvas IIâ€ brought together 70 paintings by 47 different artists from Colrain and beyond. These works, which varied greatly in style, all shared the common thread of depicting Colrain in one form or another.

Debby Wheeler, chief organizer and director of the Historical Society, said the art on display was a collection of “heirlooms” or works of art from private collections. Some of the paintings were featured with both the artist’s name and contact details so that visitors could order works of art when a particular piece spoke to them.

â€œThat’s the magic of the show,â€ she said, â€œthe people who lend these paintingsâ€.

Another part of the show’s magic, Wheeler said, was that the art hadn’t been curated – it was all-inclusive, meant to preserve the authenticity and voice of the Colrain community.

Much of the art on display showcased the city’s natural features and the humble country buildings.

Jim Murphy, a handsome artist whose paintings were on display at the salon, said that rural charm made him move to Colrain in 1973.

â€œI found growing up outside of Boston to be terribly confined,â€ Murphy, who grew up in Norwood, said of his upbringing before visiting western Massachusetts. â€œFinally, I said, ‘Why am I going back to Boston? “”

Murphy said he enjoys the area as a runner who frequently explores the outdoors. He said that even for those who don’t appreciate art, attending Colrain on Canvas could be a valuable experience, bringing them back fond memories of the area.

â€œIt might not be artistic merit (they appreciate), but they knew the horse team 15 years ago,â€ Murphy said as an example.

Wheeler said the turnout and welcome had been “excellent” with visitors often overwhelmed with emotion and nostalgia when they visited the exhibit.

She added that the success of this year’s show bodes well for Colrain on Canvas to become a long-standing annual tradition.

â€œWe plan to do one next year,â€ Wheeler said. “We already have 30 paintings on our list.”

â€œI think there should be more of this,â€ Murphy said. â€œIt’s kind of the glue that holds the community together.