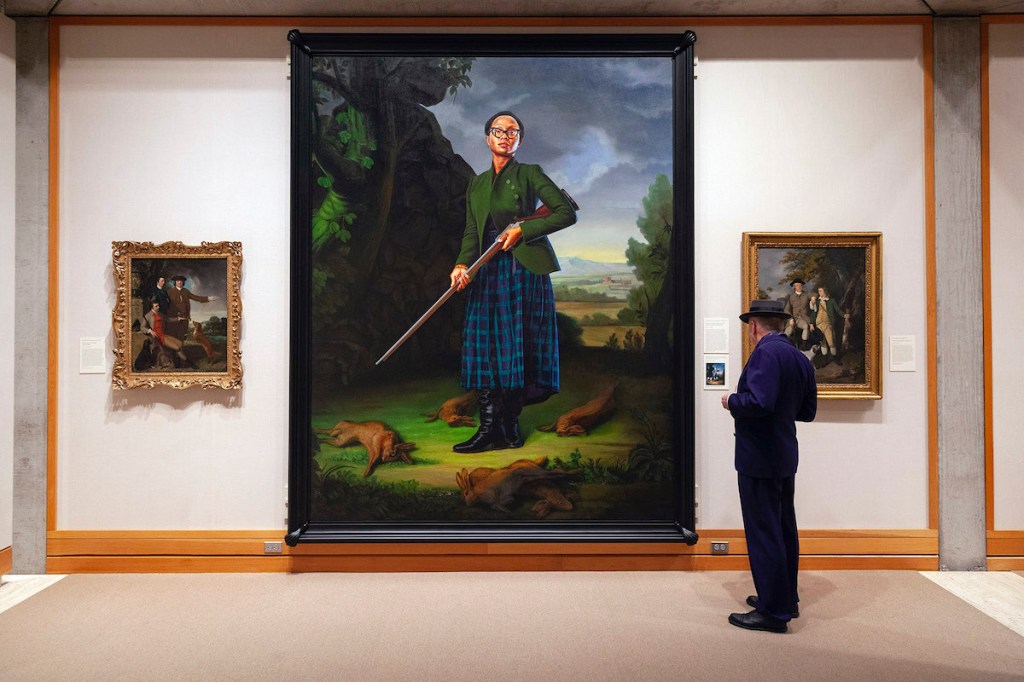 A portrait of Kehinde Wiley by British artist Lynette Yiadom-Boakye was jointly acquired by the Yale University Art Gallery and the Yale Center for British Art, both in New Haven, Connecticut. This is the first time that museums have jointly purchased a work of art.

Portrait of Lynette Yiadom-Boakye, Jacob Morland of Capplethwaite (2017) represents Yiadom-Boakye at full scale. She is dressed there in a traditional English hunting outfit, rifle in hand. At her feet are five dead hares, and behind her lies a green landscape. The work is a reinterpretation of British artist George Romney’s 1763 portrait of aristocrat Jacob Morland which is now in the collection of Tate Britain in London.

â€œDuring my time at Yale, I was drawn to the language and history of power – its negotiation, use, and potential promise for black figurative painting, as evidenced by the body of work titled Trickster“Wiley said in a statement.” Lynette’s portrait draws directly from the tradition of British hunting portraits and evokes a new sensibility, temperature and cultural logic regarding the black female body in a sacred space. “

The portrait, Wiley’s first work acquired by Yale Museums, is an example of the artist’s practice of placing black figures in historic art spaces. Wiley’s goal is to subvert the standards of Western art while creating a new tradition of portraiture.

The painting is part of Wiley’s “Trickster” series, which establishes a pantheon of some of the most prominent contemporary black artists. Kerry James Marshall, Wangechi Mutu, Derrick Adams and Carrie Mae Weems are also pictured in this series. Each artist is depicted in the grand style of the court portrait, with dramatic lighting and height.

â€œIn addition to its merits as an unusual and effective example of his work, Wileyâ€™s portrayal of Yiadom-Boakye is a meaningful tribute from one painter to another,â€ said Keely Orgeman, Associate Curator of Art. modern and contemporary at the Yale University Art Gallery. “We hope it will be of particular significance to the Yale artist community.”

The portrait will be on view until 2021 at the Yale Center for British Art, after which it will visit the Yale University Art Gallery.