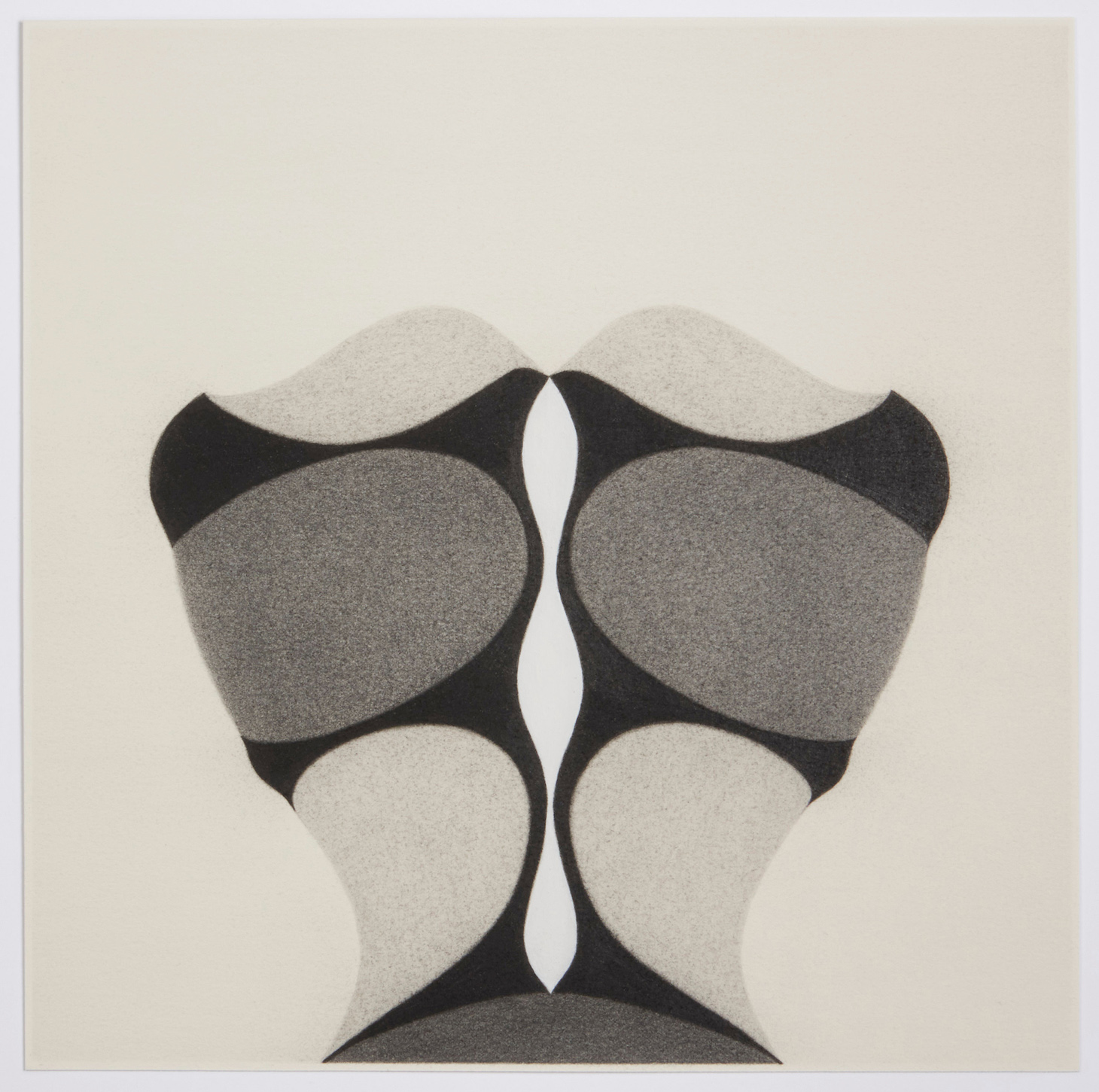 I was intrigued, surprised and, above all, completely convinced by Pete Schulte’s first exhibition at McKenzie Fine Art, Properties of dust and smoke, pt. 2 (October 30 – December 21, 2019). Working with graphite and occasional traces of muted color, Schulte’s 37 drawings in the exhibit ranged from 6 by 6 inches to an eccentric 2 by 90 inch format. The vocabulary encompassed geometric shapes, rounded organic shapes, architectural motifs and mysterious signs. Compositionally, the works have moved from flat, anti-illusionist surfaces to elusive illusionist spaces. On closer inspection, the viewer is likely to recognize an unusual amalgam of affections, ranging from Constantin BrÃ¢ncuÈ™i and Brice Marden to Emma Kunz and Paul Feeley, from reductive modular forms to bulbous pop allusions, and from suprematism to cartoons.

I love that Schulte combines seemingly immeasurable patterns derived from reductive geometric abstraction or decorative architectural details, whether he can stand alone or referential or both in the same design. I love how in some drawings a light cloud of graphite dust had spread beyond the drawn shape, like an exhale. I love the way each drawing draws you closer and invites you to slow down your gaze and contemplate the accumulations of contrast and tonal shifts, and the grainy surface of a worked form.

Committing to working on a design that is taller than you and perhaps your reach is a challenge few artists take up, but limiting the width of that same design to two inches requires very focused attention, especially if you proceed by shape and do not rely on the gesture to help you move around the drawing. It’s the kind of attention that puts Schulte in the same company as Piet Mondrian, Myron Stout, Susan York, James Siena, Catherine Murphy, Dawn Clements, Harry Roseman and Vija Celmins.

This is why I went to the exhibition Pete Schulte: The train and the river, at McKenzie Fine Art (October 29-December 19, 2021). The synthesis of rigor and originality was most apparent in the wall sculpture â€œSlow Train (Braid VIII)â€ (2021), which is made up of a pair of superimposed turtle shells that the artist cast in plastic. unsealed bronze.

Schulte repeats the pair of turtle shells vertically until they become a column on the wall. (The larger shell appears to crush the smaller one emerging from below.) Along the length of the shiny bronze is a repeated shape in white resembling vertebrae that the artist painted. As the title suggests, â€œSlow Train (Braid VIII)â€ evokes a train moving through a flat landscape and a braid of hair.

â€œSlow Train (Braid VIII)â€ is also an image of a spine that has been painted on a spine-like arrangement of two turtle shells joined together. He doesn’t feel like he decided to do this job, but rather that he discovered it was possible. It is not an expression of will, but of openness to the world and the things you encounter.

This is what I mean when I say that Schulte merges severity and eccentricity into one work and comes up with something strange. One of the pleasures of his objects and designs is that they both invite and resist interpretation. The best are mysterious and materially sensual. We see Schulte’s sensitivity to light, which is generally muffled, diffused and on the verge of fading.

Swollen forms resembling tongues; narrow and straight bands drawn horizontally and vertically; inverted triangles; wavy bands; and ellipses are just a few of the elements of Schulte’s visual vocabulary. It uses graphite, ink and pigments. Sometimes the drawings work by contrast (black and white), sometimes by tones (different intensities of black and gray, with white and perhaps a tinted sheet of paper). Solid, transparent shapes touch and overlap, like shoppers at a Christmas sale.

Schulte’s shapes remind me of columns, sails, windows, archaic signs, elongated bubbles (like those of a lava lamp or a cartoon) and heraldic emblems. The strangeness of works such as “Slow Train (Braid VIII)” and the tall, narrow designs he had in both his first New York exhibition and this one bear witness to an artist pursuing his own path, making designs that transform the rhythmic repetition of the Blues (he lives in Alabama), love of BrÃ¢ncuÈ™i’s modular forms and desire for elevation in the ether, into something all of his own. While he has developed a slowly expanding storehouse of forms and signs, oscillating between abstraction and figuration, purity and allusion, he has not developed a distinctive style. He seems at the same time focused and restless, determined and open.

Making drawing an integral part of one’s daily practice is a radical act. I thought about it when the pandemic went official in March 2020 and the lockdown began. Which artists would continue to work uninterrupted because they weren’t dependent on studio assistants and manufacturers, and didn’t depend on the work of others to do their jobs? Which artists are truly self-sufficient in this regard and do not survive on the work of others? One artist is Pete Schulte, whose second show is not to be missed.

Braque’s paintings speak of autonomy, of a quietly passionate and continuous dedication to the task at hand.

In Amber Robles-Gordon’s work, borders between states are less important than overlapping territories, the endless negotiation of identity.

The Archives is launching an initiative of the Met Museum and the Studio Museum to conserve and digitize his works, and to research the context of his photographs, his unique photographic techniques and his life.

In 1996, members of the Nez Perce tribe had to raise hundreds of thousands of dollars to pay the Ohio History Connection to secure the artifacts that were rightfully theirs.

Cash advance loans: an evolution of the personal loan system