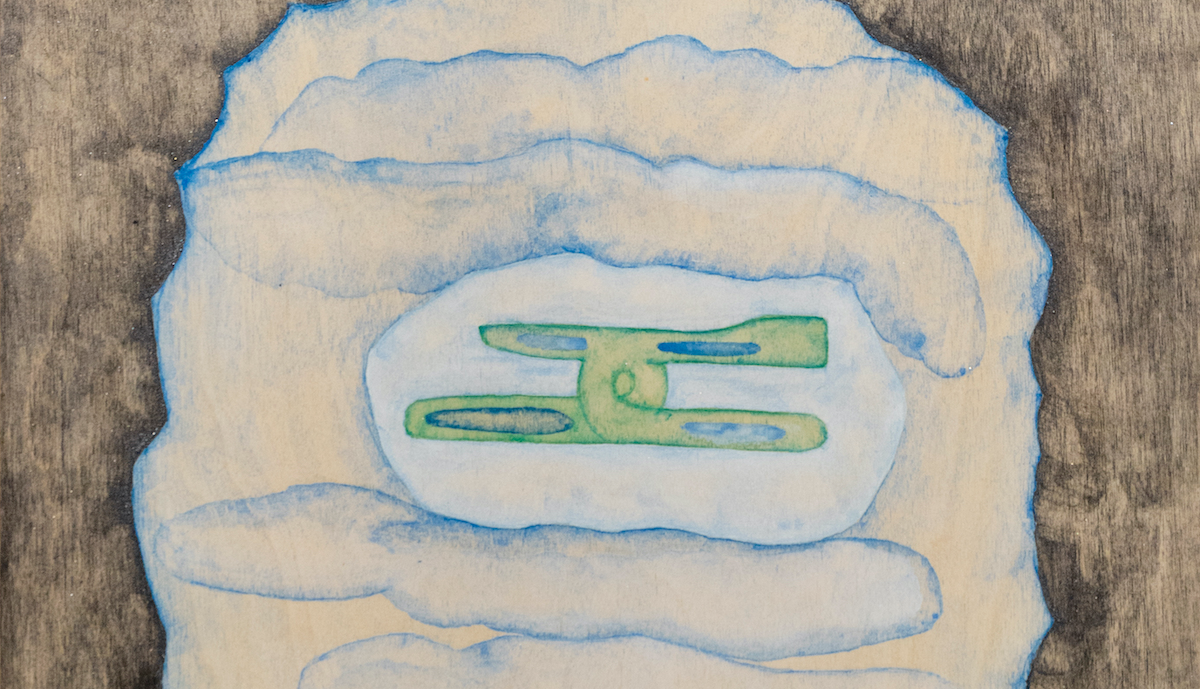 The beauty of the fleeting world

Olympia Gallery’s mission statement reads, “Olympia is dedicated to dismantling the canon of cis-male-centric art.” This means making a space for female artists at the start of their career, which is a good reason to visit. Another reason is to support a DIY space that sits on the opposite end of the real estate spectrum from warehouse-sized galleries showcasing their pricey wares. Although they may claim otherwise, top-notch galleries do little to alter or challenge the status quo. They are too busy preserving the steady flow of money in the global economy.

Lucy Mullican: as well felt as seen at the Olympia is the artist’s first solo exhibition in New York, and should not be missed. Her materials include watercolor, colored pencil and naturally dyed string, which she applies to cardboard, plywood, paper and muslin. Accompanying the works produced by Mullican are a few pairs of shoes that she found in different places where she lived and worked, including China, Macedonia, New Zealand, Australia and Germany.

What connects the washes of pale grey, green and blue, the watercolours, drawings and embroidery and the shoes placed on tables, like sculptures on pedestals, is a feeling of impermanence and vulnerability. No longer used, the shoes evoke both an absent life and the durability of materials that exist in time other than us. Looking at an unusually shaped pair of black boots Mullican told me he found in China reminded me of the last lines of Tomas Tranströmer’s poem “After Someone’s Death”: “The samurai has the looking insignificant / next to his armor of black dragon scales” (translated from Swedish by Robert Bly).

What survives and what is lost seems to be part of Mullican’s concerns. Knowing that time will eventually subsume our creations and us, she makes no move towards the immutable. By working in semi-transparent watercolor on modestly sized wooden panels with visible grains, she takes us beyond the image, and leads us to scrutinize the relationship between the watercolor marks and the lines of the grain. wood.

Mullican seems to have no set approach to his use of watercolor. The shapes can be delimited by the grain of the wood or be completely independent of it; or, using a semi-transparent color, she incorporates it as another element in the composition. In addition, the color density changes from solid to transparent and from saturated to pale. In each work, it appears that the artist has interacted with the grain of the wood, rather than viewing the medium as a blank surface.

Mullican works with a simple but flexible vocabulary of tubular forms, cloud-like spots, ellipses and irregular shapes, and oscillates between abstraction and representation. At no time did I have the impression that his painting became predictable. In one of the largest works in the exhibition, using a palette of blues and greens, Mullican depicted an irregular cross-shaped form, which extends beyond the four edges of the wooden panel. Inside the rolling edge, or blue water, cross, the artist has arranged green islands, whose shapes echo the visible lines of the wood grain pattern. In some of the islands is a blue shape which turns it into a flat donut-like shape. The relationship between watercolor and wood grain is one of recognition. So their interaction is part of the meaning, as is the feeling that everything might fade away, that everything is somehow ephemeral in the face of time.

Although Mullican’s work extends and revises both landscape abstraction and the work of artists such as Arthur Dove and John Constable, I also believe that his interaction with wooden supports and his commitment to the watercolor place it in a separate category. While the creators of landscape abstractions generally believed that their paintings were insensitive to time, Mullican makes works that are exposed and sensitive.

Existing separately and alongside these often enigmatic abstract works, Mullican creates aerial views of landscapes populated by trees, roads and fields — inspired, it seems, by naive art. In “Untitled” (2022), the centrally located abstract form, an irregular red ellipse bordered by a thin band, resists decipherment. What is this a sign of?

In works that explore the phenomena of light shining through water, evoke the Northern Lights, depict clouds reforming their shape, or convey the layers of earth’s strata, Mullican applies watercolor differently or draws in pencil from color. On a large vertical sheet of cream-colored muslin, she has sewn sections of naturally dyed twine, whose pale brown and beige hues are likely to remind the viewer of earthworms.

Mullican, who is under 30, is a young artist, but her vision and sensitivity suggest the maturity of her experience. If anything, I think she laid the groundwork for a career whose trajectory will likely surprise and engage viewers who follow her work, which I will.

Lucy Mullican: as well felt as seen continues at Olympia (41 Orchard Street, Lower East Side, Manhattan) through May 21. The exhibition was organized by the gallery.