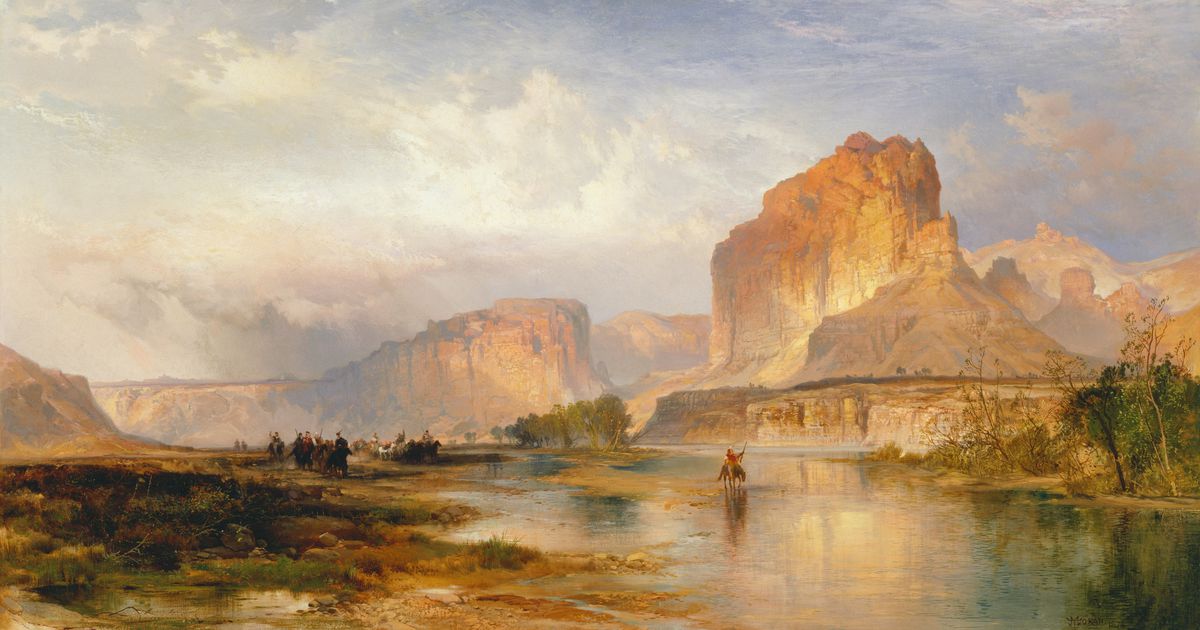 FORT WORTH – You can say that the United States of Myth was born not in 1776, but in the middle of the 19th century. It was the era of “Go West, young man,” of Manifest Destiny, of the riches of the Gold Rush, of the railroads connecting East and West.

In the golden age of landscape painting, when artists sought “the sublime” in nature, some painters from what would come to be known as the Hudson River School left New York City to venture into it. ‘Where is. There, two painters in particular, German-born Albert Bierstadt and England-born Thomas Moran captured – and popularized – theatrical, lighted views of mountains and rivers that meander through dramatic slits.

A watercolor by Moran of the mountains of Utah, recently acquired by the Amon Carter Museum of American Art, is the centerpiece of a new compact exhibit. Curators Spencer Wigmore and Kristen Gaylord contextualized it with contemporary paintings, prints, lithographs and photographs.

There are great natural scenes including Moran’s luminous oil painting Cliffs of the Green River, but also sepia photos of workers assembling the first infrastructures of the American West.

Unlike the older mountains along the Hudson, rounded by eons of rain and wind, those to the west are newer, their sharp edges still fresh from the geological crunches that prompted them to exist. Moran’s Mount Superior, seen from Alta, Little Cottonwood Canyon, Utah captures the jagged ridge of the mountain in swirls, streaks and streaks of watercolors ranging from white and yellow to purple and brown. The smoother foreground topography is rendered in watery touches, with three evergreen trees leaning against the wind.

The completion of the transcontinental railroad, connecting north to Salt Lake City in 1869, heightened fascination with the American West. Two years later, Moran was asked to join a geological survey of the Yellowstone area in Wyoming. Partly funded by the directors of the Northern Pacific Railway, keen to promote tourism in the area, Moran and photographer William Henry Jackson were asked to produce images for publicity purposes.

Reproduced in the East, the “eerie sketches of fumaroles, sulfur pinnacles and hot Dantesque lakes,” as the late Robert Hughes wrote, “looked as strangely strange as the first photos of the moon would be a century later. “. Along with Jackson’s photos, Moran’s images helped trigger the designation of Yellowstone as the first national park and proved lucrative for rail traffic. They would also prove lucrative for the artist, from whom the US government subsequently purchased two of his larger paintings.

The Mount Superior the watercolor is from an 1879 trip west with Moran’s younger brother Peter, also an artist. (Their older brothers Edward and John were also artists, as was Thomas’ wife, Mary.) They spent time around Salt Lake City, already bustling with the influx of Mormons and miners.

Prints in the Fort Worth exhibit, from the 1860s, include the heroic Mormon Temple of Salt Lake City (not completed until 1893) and the Tabernacle. Mount Superior, today a popular destination for hiking, rock climbing, and skiing, is just 35 miles from the city’s downtown core.

Thomas Moran is also represented by an engraving of Tower Falls in Yellowstone Park and by examples of chromolithography, a new process of color reproduction of paintings. Peter Moran’s watercolors illustrate pueblos in New Mexico and Arizona and irrigation works erected by Chinese laborers in Nevada. An engraving of a Pennsylvania bridge is outside the territorial focus of the show, but it shows Mary Moran’s skill in rendering the atmosphere in the medium.

These are the borders of a century-old country. They represent a great American push to the west fueled by forces as diverse as geological curiosity, greed, and religious belief that this was God-given land for a chosen new people.

Spotlight: a new Zurich exhibition explores the power of the line through organic sculptures by Christiane Löhr and gestural paintings by Louis Soutter