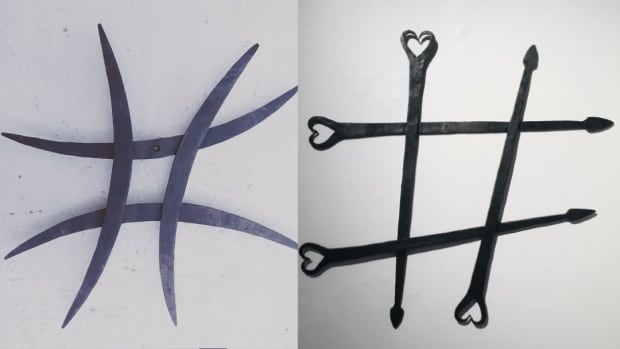 A self-taught blacksmith created works of art exploring “hashtags” as a means of connection and the connection between the social media symbol and the prairie landscape.

Hashtags are used on social media to explore similar interests or places. “Hashtags” is also the name of Jim Gerlinsky’s new art exhibit at the Hand Wave Gallery in Meacham, Saskatchewan, approximately 60 kilometers east of Saskatoon.

The artist from Wilkie, Sask., Was inspired about 20 years ago after a reviewer of his work called him “deeply prairie.” This comment got him thinking about what Prairie really means.

Gerlinsky said the Prairies can look flat and boring, unrelated.

“My work is the same at first glance… It’s clear, simple, it’s boring. But hang out with it. Like, look at it just across the meadow. It’s subtle. There are soft, flowing lines, there is texture, “said Gerlinsky. Weekend in Saskatchewan. “There are a thousand different colors in one shade. This is the prairie.”

The artist began to think about hashtags and their relationship to the prairie landscape after the Hand Wave Gallery gallery owner said the landscape was pretty and there were hashtags on the grid.

Weekend in Saskatchewan10:48Hashtags: a modern message with an ancient art form

We use hashtags to stay connected on social media. A Saskatchewan blacksmith uses hashtags to connect people to his art. Jim Gerlinksy now has an exhibition at the Hand Wave Gallery in Meacham. He joins host Shauna Powers to talk about his “deep prairie” style. 10:48

One of his hashtag series is called Etudes, with pieces that seem light and airy. Gerlinsky said that it was actually simple to make it look like these pieces were going to take flight, because when the iron is hot, it moves under the hammer with only an anvil.

“All of these pieces started out the same way. They all started out as a quarter inch thick, an inch wide, a foot long piece, which is why I call it the Etude series, because everything is a study, ”said Gerlinsky. “What different ways can they go together?

The exhibit also features iron thistles, iron lilies and iron cattails. Gerlinsky said you can’t imagine the prairie landscape without cattails in the ditch along the grid roads.

Gerlinsky said this show was different from his usual job. He said there were times he worried things might not go as planned and no one would verify him, but he knew the gallery owner believed in him.

“When we unpack the things… his face lights up with joy at the pieces and I tell him, ‘I’m so glad to see that look on your face,’” he said.

Gerlinsky said he hopes people see what they like in the forms. He mentioned one where he saw dancers and a friend saw the rivers of the Prairies.

“I just did and I hope someone likes him enough to want to take him home with them,” he said.

Hashtags is on display until September 9 at the Hand Wave Gallery in Meacham. The gallery is open Friday through Monday from 1:00 p.m. to 6:00 p.m. CST, but you must call ahead to arrange a visit. There will also be a closing reception later this summer.