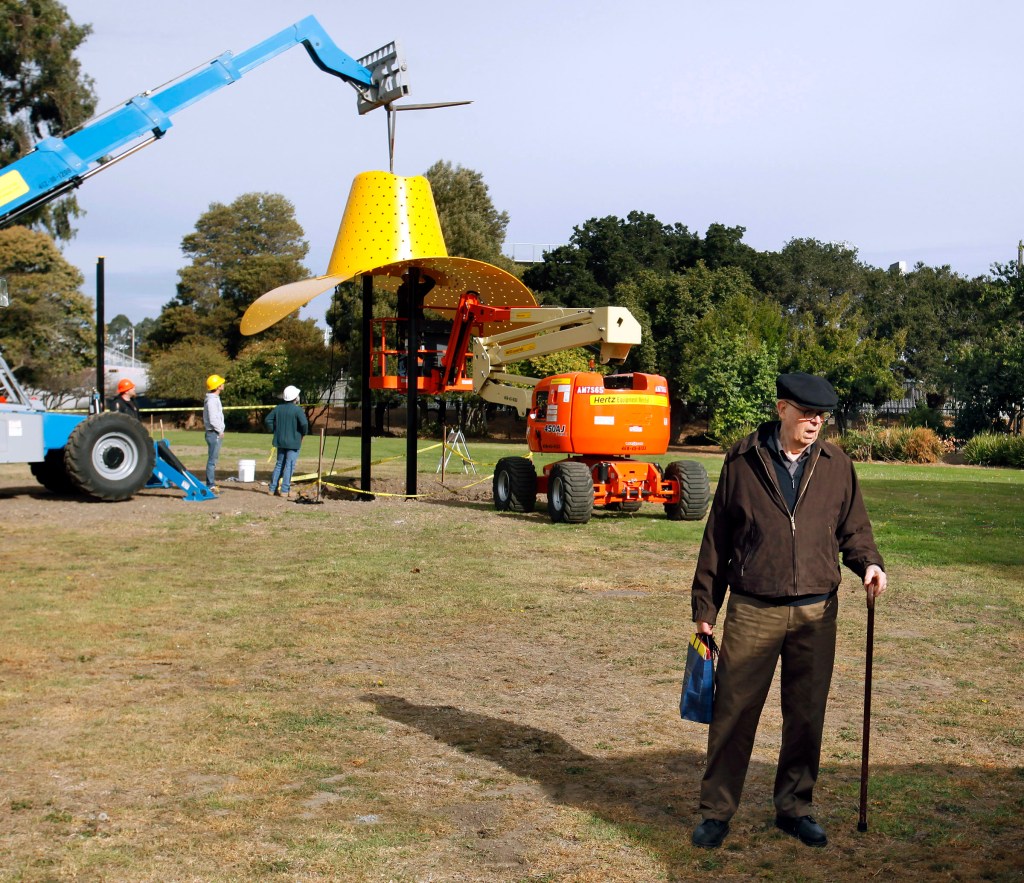 SALINAS — When Trish Sullivan, a Salinas artist and adjunct art teacher at Hartnell College, asked her class of 45 students if they knew of Claes Oldenburg’s heroic sculpture, “Hat in Three Stages of Landing,” only one knew it was a true work of art. . A few knew it was located in Sherwood Park, next to Sherwood Hall and the Community Center. Some assumed it was a public playground structure. Most had never heard of it.

And yet, for many members of the Salinas community and an international audience that comes in search of it, the sculpture is a monument, not only to the diversity of cultures and characteristics of the Salinas Valley, but also to what can happen when people come together to honor who they are and what they stand for, through public art.

Oldenburg, a Swedish-born American pop artist, world famous for turning ordinary objects into monumental sculptures – think “Spoonbridge and Cherry” in Minneapolis, “Clothespin” in Philadelphia, “Cupid’s Span” in San Francisco and “Hat in Three Internships”. of Landing” in Salinas — died Monday at his studio and home in SoHo, Manhattan. He was 93.

More than 45 years ago, members of the local community, including Ansel Adams, founded the Monterey County Arts Council, through which they commissioned monumental public works of art in Salinas. In 1978, they commissioned Oldenburg and his wife, a Dutch-American sculptor, art historian and critic Coosje van Bruggen, to design and create a sculpture representative of the Salinas culture.

“Retired Washington attorney Ted Thau has made a proposal to the National Endowment of the Arts for a $100,000 grant for a major sculpture,” said retired art teacher and director Gary Smith. permanent gallery, with his colleague Eric Bosler, at Hartnell College. “Ted, along with Richard Rhodes, architect of the Salinas Community Center, and Helen Kingsley, were the triumvirate who proposed and commissioned Claes and Coosje to create the sculpture.”

Oldenburg and van Bruggen came to Salinas and stayed with Rhodes, who drove them all over Salinas, to give them a feel for the area. The couple returned to New York and, after a few months, returned to town to present their marriage proposal in a ceremony at the Salinas Community Center.

Mayor Dennis Donohue and anyone with an interest in the project were there when Oldenburg unveiled a small mock-up of three hats, made from Dixie cups and sanding discs. Hats.

“The community wasn’t too receptive,” Smith said. “It was as if a spectator at the rodeo, in a moment of enthusiasm, had thrown his hat in the air, and it landed, in successive stages, on the lawn. Claes had already made a hat, a lithograph of a hat flapping in the wind. He was carrying a spiral notebook, with hand-drawn drawings of hats blowing in the wind, wonderful little drawings. He knew the wind in the Salinas Valley.

Still, Dixie cups and sanding discs were a tough sell. A lot of people just couldn’t see it. Some said they looked more like a women’s garden cap than a western hat. Others did not understand the decision to make a hat.

“Hats in Salinas are part of an enduring culture,” Sullivan said. “There was a time when everyone wore hats of a wide variety – bowler, cowboy, baseball, sombrero, Asian sun hat – Claes and Coosje wanted to combine cultures by mixing the style of different hats. is the most representative of a cowboy hat, but it has elements of the others.

The brim of the hat, shaped like a saddle, she says, is a nod to the Western tradition of Salinas. The yellow color represents the sun and agriculture, and the holes suggest a strainer used to rinse vegetables, a reference to the salad bowl of the world.

Oldenburg and van Bruggen returned to New York where they had the three-piece sculpture made at Lippincott Foundry. In 1982, Representative Leon Panetta spoke at the dedication ceremony, and the band from Hartnell College performed to a large crowd gathered to celebrate Claes Oldenburg’s first sculpture installed west of the Mississippi.

Over the years, the great divide has continued between those who appreciated, who “have” the sculpture, and those who do not. In the meantime, the pop art-meet-beaux-arts-meet-play structure has withstood years of neglect and disrespect, succumbing to graffiti, carvings and a crack that threatened the stability of the structure.

The contempt for his work hurt Oldenburg more than the decay.

In 2005, Trish Sullivan, determined to make Hat sculpture known and appreciated, presented an art project to her students at Everett Alvarez High. Based on the design of the sculpture, the students made a flexible sculpture of giant polystyrene hats, painted yellow and spray-painted with graffiti to represent the vandalism inflicted on Oldenburg’s art.

Students marched with their hats in the annual Kiddie Kapers Parade and brought them to First Night Monterey and the First Fridays Art Walk. A year later, students and their Styrofoam hats witnessed the re-dedication of the “Three Stage Landing Hat”.

In 2006, then-Mayor Dennis Donohue initiated a process to restore the sculpture, convening a committee including, among others, Paulette Lynch, executive director of the Monterey County Council on the Arts, Trish Sullivan and Gary Smith. . After Coosje van Bruggen lost her battle with breast cancer in 2009 at age 66, the committee postponed the project, out of respect for Oldenburg, until 2010.

While visiting Oldenburg at his SoHo studio while on business in New York, Donohue developed a relationship with the artist and a whole new level of appreciation for his Pop Art, in particular, ” Hat in Three Stages of Landing”. Oldenburg reportedly invested $44,000 from his private foundation in the restoration project and expedited its completion.

Oldenburg, who witnessed the rededication of his restored sculpture, was captivated by the fact that young people had taken inspiration from his works to create their own version. He also appreciated that people of all ages interacted with his work and that interest in it was rekindled.

“I had the privilege of meeting Mr. Oldenburg when he returned to Salinas for the rehabilitation of his sculpture,” said Salinas Mayor Kimbley Craig. “He cared so much about the artwork — the color, the location, the meaning — because it was the first project he and his wife, Coosje, worked on together.”

“Hat in Three Stages of Landing” is a great story and something Salinas and Monterey County should be proud of, says Gary Smith. “It is a major work, and one of the great collaborations of the 20th century. Claes was truly an incredible man, the last of the great pop artists. We will miss him.

In Rome, a new museum for treasures recovered before returning home