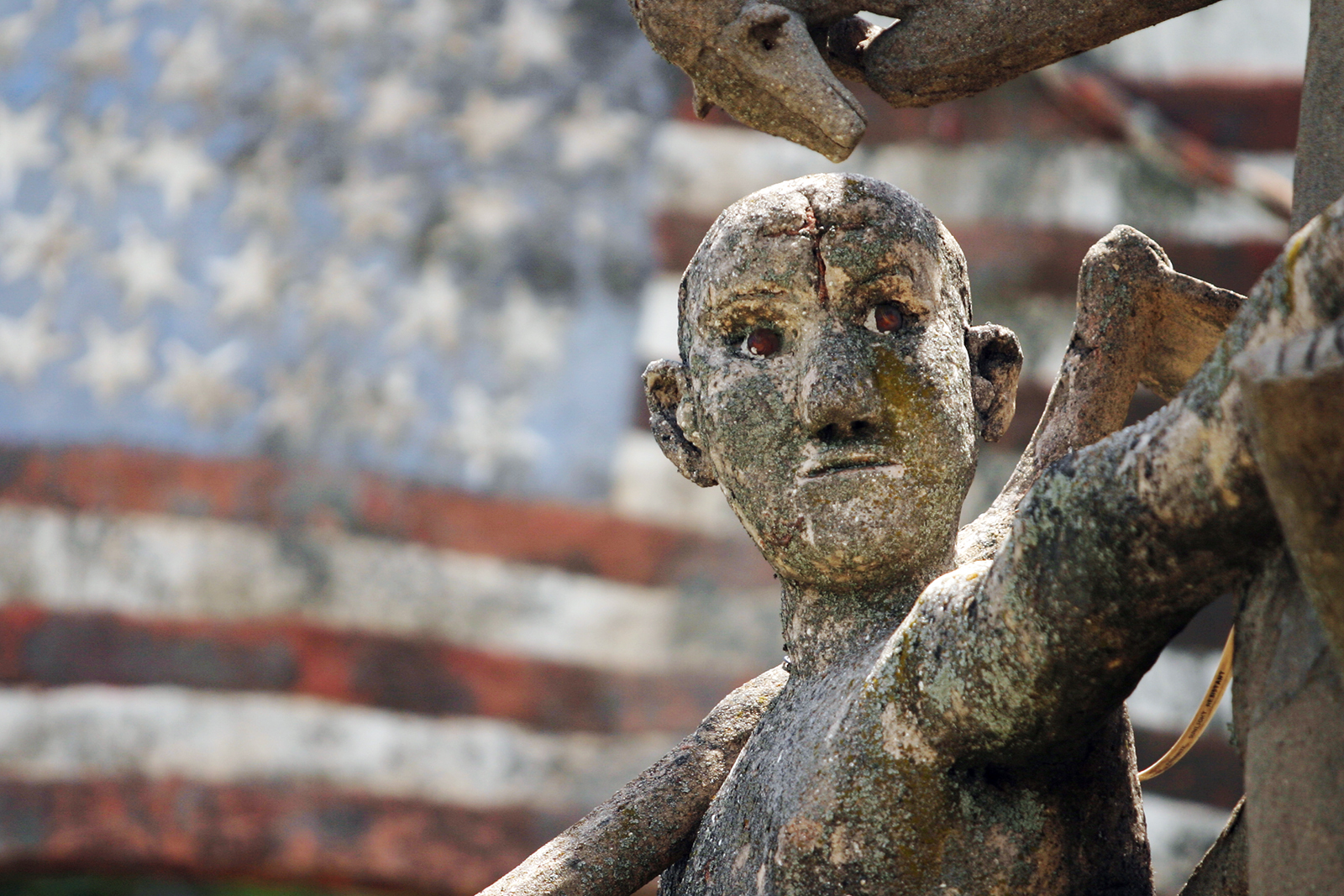 I remember the first time I walked past MT Liggett’s outside of Mullinville in Kiowa County. Like many other western Kansas motorists over the years, I sided with US 54 to get a better look at Liggett’s political, primitive, and very public art installation.

There were a few hundred metal sculptures, made mostly from discarded farm equipment, some with wind-driven swirling blades, lining his pasture. Current political figures (and a few from mythology) were made burlesque in metal and paint, with handwritten commentaries, and the language was rough. Some characters were called whores or pimps. Swastikas brought home the point where words failed. Of all the local and national leaders represented in the roadside pantheon, the most severe contempt was reserved for Hillary Clinton: â€œOur Eva Braun in boots.

I was confused. What kind of crazy lives here? How does he have time to do all this? What kind of reaction will he get with the swastikas? But I also had a feeling of shame, because whatever response the artist was looking for, it had worked on me. I had stopped to see better.

So many other people did, in fact, that the Kansas Department of Transportation put up “emergency parking only” signs along the pasture in 2001. A story from Wichita Eagle at the time described the art like “crazy roadside sculptures” and “metallic monstrosities”. Liggett, who started sculpting in the 1980s when he was in his 50s, has been banned from the local cafe for his outspoken views.

But when Myron Thomas Liggett passed away in 2017, at the age of 86, his death was noted by no less than the Washington post and the New York Times. By that time he had already been acclaimed as a major American folk artist and had exposure to American Visionary Art Museum in Baltimore. Liggett’s obituary in The Times called him a “Folk artist and provocateur” and quoted from Thomas Frank’s 2004 book, “What’s the Matter with Kansas?” Frank said the art “sparkled with anger” and represented “the gospel according to Rush Limbaugh”.

Although Liggett sometimes taunted Republicans, most of his bile was directed against Liberal Democrats. Towards the end of his career, Liggett made the transition from cranking town to an artist who used controversy as a calling card. In his obituary, the Wichita eagle called him one of the Kansas members “The best and most prolific grassroots artists”, and described his work as “eccentric” instead of crazy.

Now, it is no longer necessary to stop on the side of the road to see Liggett’s art.

Last Saturday, the MT Liggett Visitor Center held its Grand opening in Mullinville, and visitors can view more than 600 pieces in the â€œartistic environmentâ€. The Kohler Foundation has preserved the sculptures, and the installation is maintained, on its original site, by a handful of local organizations, including the Kansas 5.4.7 Arts Center, Greensburg. The name of the center is for the tornado of May 4, 2007, which virtually destroyed the city.

I don’t know if Liggett was good or not. Others have a better eye for it. He was expressing his First Amendment right to free speech however he saw fit, and the fact that his art made me uncomfortable could be indicative of his power or my own low tolerance for swastikas.

What I do know is that her art brand would be harder to sell in 2021 than it was 20 years ago, as politics has become its own type of folk art. Swastika swirls are pale compared to a Capitol uprising featuring real fascists, a party that inexplicably fights mask and vaccine initiatives during a pandemic, and a Kansas lawmaker who called a state soldier a “donut boy” after being arrested for drunk driving.

Crazy is wholesale these days.

We’re so immersed in the matter that it’s hard to keep track of the new level of political insanity in any given week. Not so long ago we learned that our highest military leader feared incumbent President Donald Trump would launch a nuclear strike to create a crisis through which he could stay in the White House. This is in addition to polls that show Trump’s big lie about a rigged election is working. Slight majority of Americans now fear elections, CNN poll finds does not reflect the will people.

None of this would surprise another Kansan who turned his anger at the government into art – and tourist money. Long before the term “foreign art” was coined by art critics Roger cardinal in 1972, SP Dinsmoor was busy making the world as he saw it in concrete and limestone. Dinsmoor was a Civil War veteran who dabbled in farming before moving to Lucas, in the Smoky Hills of north-central Kansas, in 1905. There, at age 62, he began building “The Garden of Eden”.

His elaborate log home is constructed from nearby quarried limestone, and around the house are cement sculptures depicting biblical scenes or allegories of the populist movement that swept Kansas in the 1890s. One of his sculptures the most famous shows Labor having been crucified by a doctor, a lawyer, a preacher and a capitalist. Dinsmoor was an excited, widower old eccentric who, at 81, married his 20-year-old Czech housekeeper, Emilie Brozek, and father of two.

From the start, Dinsmoor made its art to attract tourists who would pay to see it. The work may be crude, but its scale is impressive. In the back, Dinsmoor built a pyramid-shaped mausoleum which became his last resting place after his death in 1937. It is still there and the site – now listed on the National Register of Historic Places – remains open to the public. . It became the center of a popular arts community in Lucas. I have been around “The Garden of Eden” several times and always paid a few dollars more to see Dinsmoor lying behind glass in his concrete coffin, a concrete jug for water nearby in case where he would head to the wrong place.

In 2002, New York art critic Peter Schjeldahl wrote an article about the opening of the American Folk Art Museum. He described the “people” who create such art as “flawed citizens” at odds with society. “The terms ‘folk’ and ‘outsider’ – not to mention the flabby ‘self-taught’ euphemism – are difficult to use without condescension, asserting superior knowledge,” writes Schjeldahl. â€œThe stereotypical folk art lover is both conservative and condescending. Folk art can be to art what pets are to the animal kingdom.

The conventional view, he says, is that folk art differs from fine art “as birdsong is from opera.”

I think about that observation now, as I reflect on the work of Dinsmoor and Liggett. If birdsong is a spontaneous joy, then there is joy in Lucas and Mullinville, as well as echoes of the barbaric yawn of Walt Whitman. But there is something more. It’s a remarkable awareness of political culture, an understanding of the psyche of fellow Kansans, a sneaky comment sparked off by newspaper headlines and the evening news.

While Dinsmoor’s art seems like a quaint and spooky footnote in Kansas history, Liggett’s work quite vibrates with themes that continue to shape the Trump era. The joy in his art is apparent in the silly and absurd characters, mythological themes and autobiographical nods to romance. But there’s also the anger that was disturbing and decidedly alien in the 1990s, and even Kansas’ staunchest Republican of decades past would have paled when describing Hillary Clinton as a huge swastika.

The former first lady and failed Democratic presidential candidate has been called the worst by right-wing extremists who spread lies that Clinton and others were part of a global pedophile cabal who abused children during satanic rituals in the basement of a pizza restaurant in Washington, DC. “Pizzagate” was the forerunner of the QAnon movement, which continues to promote the toxic and baseless claim that Trump is fighting a powerful child sex network of world leaders.

Years ago I was amused by David Icke, an English football star and television personality who took an extraordinarily public psychotic break and began telling his audience that the world was being ruled by lizards from another dimension. These lizard people (whose members included the royal family) kidnapped ordinary people, Icke claimed, and abused them at a secret underground base in Branson, Missouri. The authors included American politicians, Kris Kristofferson and Boxcar Willie. Icke was such a stranger, and his claims so absurd, that he didn’t really sound like a threat. But now I see that there isn’t much of a difference between the nonsense Icke was spreading and what the followers of QAnon believe.

Gone are those days when we felt safe and far away from crazy ideas, where we could pull up on the side of the road and gawk at a homemade show of political anger. Wacky ideas no longer amuse me, because the irrational is inherently dangerous, a bully that cannot be dissuaded. I lost my sense of humor. What was once laughable, if not absurd, could become the next craze that will propel the next political movement to threaten American democracy.

In 2015, when Donald Trump stepped off that golden escalator and announced his presidential campaign, I treated the act with the kind of condescension Schjeldahl describes as hard to avoid when it comes to outsider art. But the joke was on those of us who thought Trump’s candidacy was a coup, an inferior attempt at policy by a self-taught foreigner.

I still don’t know what to think of MT Liggett’s art. Maybe I never will. While it bothered and offended me, at least Liggett channeled his anger into public discourse, however unconventional it was. I’m sorry, all those years ago, I just stopped and watched. I should have knocked on his door and asked him to share a cup of coffee at that cafe down the street, and maybe we both got kicked out.