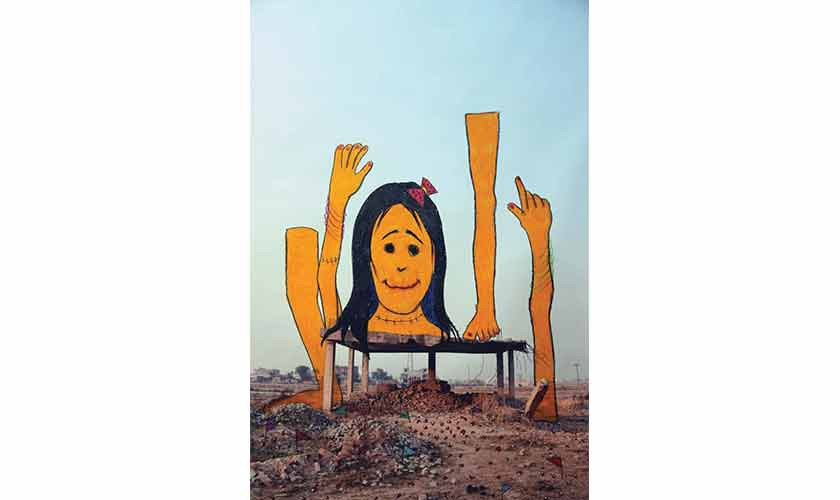 he latest multimedia works by Haider Ali Jan, exhibited at the T2F gallery, initiated a conversation on various tangents to the stories, experiences and concerns of an ordinary man.

Organized by the VASL Artists Association in Karachi, the exhibition included sculptures, paintings and printed works. The solo exhibition showed Jan’s lifelong interest in the events of everyday life, recalled, reimagined and reformed using his unique illustrative rendering style of creating visuals and volumes. Jan emphasizes that he doesn’t prepare to create new art forms with a particular goal in his head. The process is always based on his intuition. Once he’s caught a sparkle from his collection of archival documents, photographs and mundane objects, he puts on an apron.

The fluidity of expression, childlike designs and mark-making in his visuals portray a certain level of casualness and freedom to experiment with various juxtapositions of elements in unprescribed arrangements. Haider is incidentally inspired by the social thoughts of the French existentialist philosopher Henri Lefebvre on the “critique of everyday life”. All of this is reflected in the dialectical thinking he employs to lay down the fragmented code of vernacularism, which translates everyday situations and anecdotes into candid and pure visual expressions – not just a philosophical dilemma.

The unknowns in Jan’s sculptural works, the hybrid of unconscious entities of humans and invertebrates with extraordinarily elongated limbs and faceless life, are reminiscent of the figures in cave paintings made by Neanderthals — also the stylized figures of Aboriginal art from the Kimberleys. One of the figures is placed on a yellow four-legged chair (without the backrest) with long legs and arms holding a seasoned bamboo stick.

A detached and deformed hand mounted on top of the bamboo stick with a swollen finger, the title reads His finger hurts. As Jan explains, this is the familiar story of an ordinary person. A person who is most concerning, albeit momentarily, letting others know of their pain, doing nothing but sitting, whether out of naivety or ignorance.

Another exciting form shows a low bowing torso and extremely elaborate legs glued to a morah, a traditional round stool in hand-woven reed and yarn. The piece is titled Contemplate – interestingly, with no pair of eyes or indication of a brain. It denotes another reality, failing to come to a conclusion or decision – a commoner, a confused Confucius. The third and final sculpt in the series is a bizarre, lifeless figure with a whipped-back neck, seated in a regular chair in a very casual manner, with lots of abdominal fat showing. The seat is made of red rexine, an artificial leather-like fabric found in abundance in urban settings, restaurants, banks and public offices. The demographics or metaphors behind these odd characters and ordinary chairs/stools are unknown; one can intervene to decipher it more subjectively.

Photographs of ordinary places, spaces and objects are an integral part of Haider Ali Jan’s visual narratives. Sometimes he mixes them with computer-aided illustrations. On other occasions, he paints over large digital prints of these photographs. In a multimedia work, titled Expect, the small nameless black figures are painted over the photographs of usual red-brick residential apartments with typical balconies and windows.

Seemingly cheerful residents or members of the general public, in a festive mood, anticipate the arrival of a very, very important person (VVIP) – a political figure considered a messiah or foreign dignitary. Jan picked up on this daily global activity to pose a skeptical contemplation, because, despite all the multicolored flags and excitement, an event may not take place at all or may not bring the intended change in the lives of those who celebrate it. It’s a familiar high point in a commoner’s belief system.

As we approach another multimedia piece hanging on the wall, titled Pedestal, it feels like putting the pieces of a puzzle together. There is a photograph of a building under construction that looks like a portico – a single-story concrete ceiling on a few pillars. It appears to be half demolished even before its completion – another ordinary derelict sight in the newly developed suburb.

On closer inspection, one notices a random juxtaposition of body parts rendered in yellow. An oil painting of a girl’s head is placed on the roof. The detached but elaborate arms and legs are in a perpendicular view above and above the unfinished structure. The body parts are much larger in proportion to the building. There are surgical stitch marks on the neck and near the wrist on the left arm. A red bow hair clip, several picked flower petals and a few multicolored pennants are left at the exit as a symbol of victory. Suddenly, one can decode an uncomfortable comparison. Sometimes we have to settle for loose pixels in an image.

The work Tomb shows a wall cabinet from Jan’s old house which has since been demolished. He drew a piece of cloud, a two-pronged sword, fruit, a planter, and candles in various islands in the cabinet. At the lowest level, two legs lie side by side. There is a man’s bare foot and a woman’s foot with a shoe. A necklace of red beads binds the two legs. A horse-like donkey appears huddled behind the cabinet, wearing lipstick and having a holy foot – all in oil pastels on a digital print. There is a childlike sensibility in the work. Everyday objects and arrangements symbolize nostalgia. There is a perpetual impression on the artist – bearing on a virtual archive to converse with.

Haider Ali Jan’s new body of work explores the everyday beliefs and fragmented thoughts in our heads. We eventually realize that the “fragments” are waiting to be connected in a coherent line of thought and that each piece is essential to reach the scene. Ordinary Existence was exhibited at the T2F gallery, from August 24 to September 5.