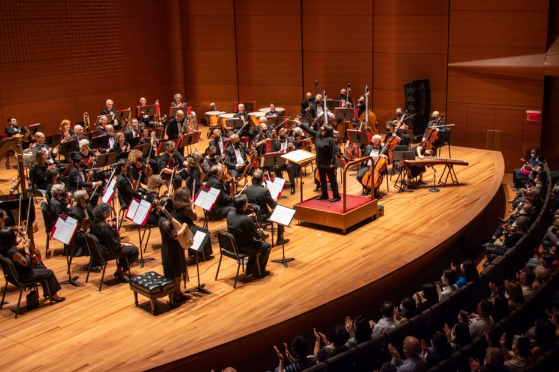 East met West at a delightful concert in New York that featured the best music from Chinese and American artists in collaboration with the New Jersey Symphony.

Image China – East/West Symphony Concert with Maestro Xian Zhang at Lincoln Center in Manhattan was presented Wednesday by the China Arts and Entertainment Group alongside the New Jersey Symphony.

The evening aimed to unveil the beauty of Chinese music to Western audiences with a concert that effortlessly blended masterful and moving renditions of classic American songs with the delicate, tranquil, folksy and joyful sounds of Chinese classical music.

” I loved ! The first three tracks were exceptional,” Steve Rolston from Long Island, New York, told China Daily after the concert. “It was so nice to dip my toe into Chinese classical music. It was as joyful as any classical music. I really enjoyed it.”

The concert was sold out, with at least 900 people in attendance at Alice Tully Hall, a Lincoln Center concert hall.

Maestro Xian Zhang, renowned conductor and Music Director of the New Jersey Symphony Orchestra, led the orchestra effortlessly through a series of songs that showcased the best of each culture.

Zhang told China Daily, “The key is to use this opportunity to really bring people together through art. And right now it’s a very divisive time. But I think with the music, we can get together, and we have a room full of people, Americans and Chinese, which is fantastic.”

Huang Ping, Consul General of the Chinese Consulate General in New York, said in a statement, “Music has the unique power to bring people of different countries, races and cultural backgrounds together. … Tonight’s performance will touch our hearts and bring us together for a better future.”

The suite included two theme songs from Image China productions performed over the past decade, including Soaring Wings and Confucius.

Chelsea Guo, an internationally acclaimed pianist who has performed at Carnegie Hall in New York and in London, Austria, France, Poland, Italy, Spain, China, Japan and Canada, dazzled the audience with his talent and passion while praising the composition.

Guo told China Daily: “One of the most important things for me personally is that everything comes from the belief, really, that all these composers, all those who create, create something from human experience and of the human heart.

“And at the end of the day, all those notes and all those expressions on paper are really just a way of noting something much deeper inside.”

The night also featured the classic Appalachian Spring by American composer Aaron Copland. It was first performed in Washington DC in 1944. The orchestra breathed new life into the classic.

The room was then filled with Violin Concerto No. 1 by Zhao Jiping, one of China’s most prominent composers.

Zhou said it was important that her work reflect her Chinese heritage and the fact that she was born in the United States to Chinese immigrant parents.

She explained that her violin offered a lot of girth in sound, so there were both masculine and feminine aspects that she “cherished”. She added that she really enjoyed working with the New Jersey Symphony and Maestro Zhang.

“I heard [the New Jersey symphony] before living a few times and I have been a fan of Maestro Xian Zhang for a long time. And so to have this opportunity tonight to present music alongside them is very, very valuable to me,” she told China Daily.

The night came crescendo with the Song of the Yangtze River, a traditional Chinese song, originally composed by Wang Shiguang/Hu Hongwei in 1984. The song captures a flowing river and the exquisite scenery of the Yangtze River. It expresses the deep love Chinese people have for their country.

In the final moments of the concert, Esther Maureen Kelly, an American soprano, who performed both Western operas and Chinese art songs, joined forces with Yongzhao Yu, a tenor, who sings this season for the Arizona Opera.

Kelly told China Daily: “It’s so important to [showcase the music of each country.] I think the fact that we have this opportunity to showcase Chinese music in conjunction with Western music on such a big American stage is wonderful. I think it would be great if it became more common in the repertoire to see all kinds of people singing Chinese music because it’s great material.”

The home of art collector David Angelo looks like a museum