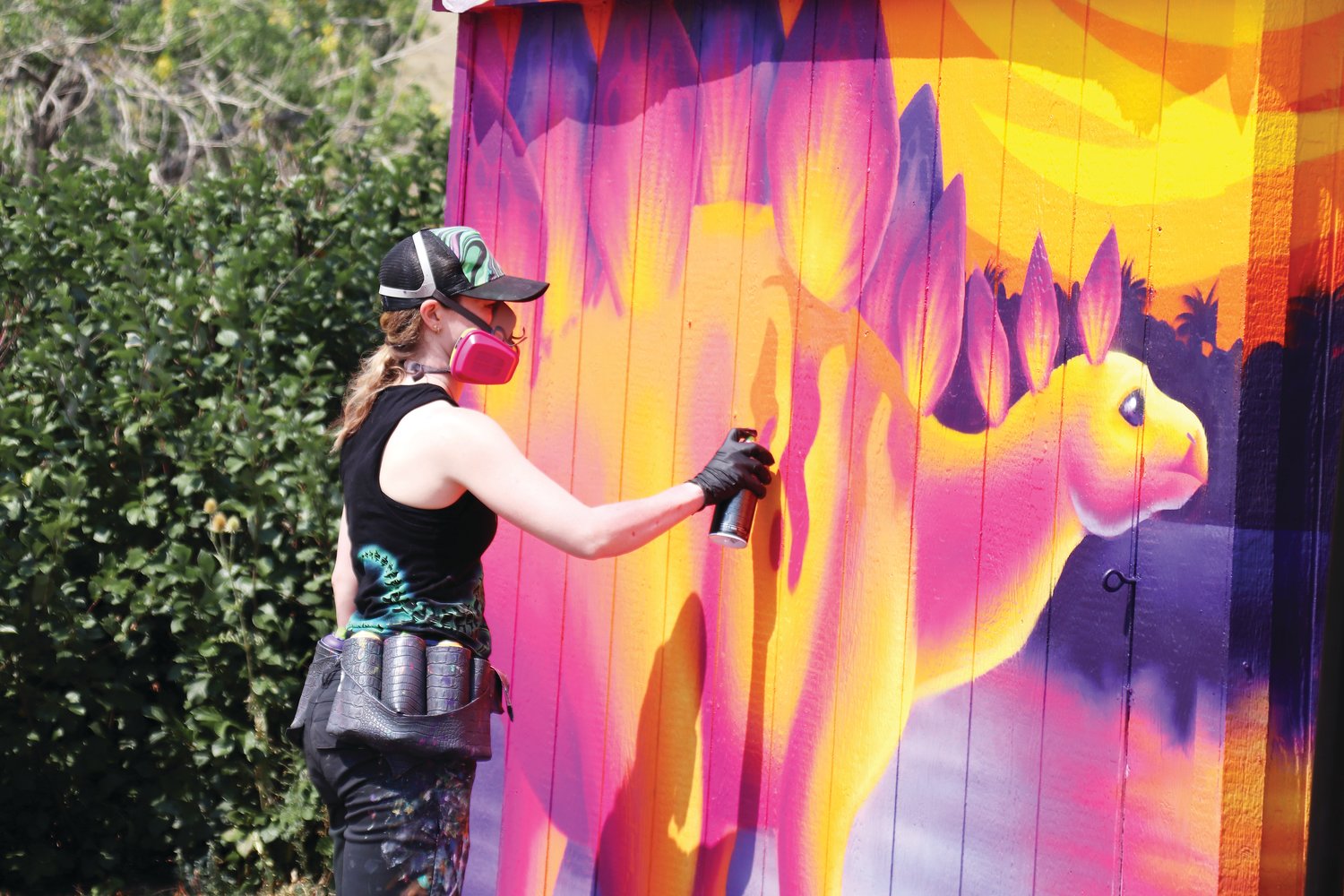 Morrison’s Dinosaur Ridge has long offered a unique chance to see the footprints left by dinosaurs. But from now on, visitors will also have a new perspective on what it might have been like to see dinosaurs traversing the region’s prehistoric landscape.

That perspective will come via a new mural covering both sides of the facility’s ticket office in its visitor center, which depicts three dinosaurs walking through the mudflats that once characterized the area.

The dinosaurs depicted include a large Stegosaurus, the first skeleton of which was discovered at Dinosaur Ridge, and two long-necked apatosaurus. Artist Julia Williams said she also plans to make several trails in the mudflat to reflect the fossilized footprints that can be seen at the site.

The mural was “a perfect opportunity” for Williams, who goes by the artist name “The Designosaur” and has painted several murals in the Denver area, including a few depicting dinosaurs.

â€œI’ve always loved dinosaurs since I was little,â€ Williams said. â€œI feel quite connected to them. “

Kristen Kidd, director of marketing and communications for Dinosaur Ridge, said the affinity for dinosaurs made Williams a natural to design a mural for the visitor’s center, which already has several painted Stegosaurus figures spread around its exterior.

â€œNaturally when we heard from her we were curious what she could do here,â€ Kidd said in an email. “And its design blew us away.”

Williams, who lives in Superior, said the opportunity was also particularly exciting as she frequently visited Dinosaur Ridge while growing up in Arvada.

â€œI couldn’t believe it when they called me,â€ she said.

One of Kidd’s trademarks is its super bright colors. The Dinosaur Ridge mural, which has a color palette of bright purple, red, orange, and yellow, is no exception.

â€œI think it’s super warm, inviting and fun,â€ she said. â€œI wanted to bring some kind of color to this area. “

The mural isn’t the only new piece of art coming to Dinosaur Ridge.

In a press release announcing the new mural, Williams explained that Golden-based artists Pat Madison and Jim Dickson will also soon be teaming up on a new piece for the installation called “Eolambia.”

The press release describes the piece as a life-size geometric sculpture of a herbivorous dinosaur called Eolambia that “will look like a Rubik’s Cube with its multicolored design.”

The project will be visible to traffic along I-70, its location and date of installation to be announced shortly.

Madison created a small herd of colorful geometric triceratops (done in a style similar to “Eolambria”) last year. It can be seen at the intersection of 56th Avenue and Highway 93, just north of Golden.

Williams said the Friends of Dinosaur Ridge paid for both projects out of his budget,

â€œWe love that there are local artists who feature dinosaurs in their work – it fits perfectly with our vision to provide a place that not only educates visitors, but sparks wonder and imagination,â€ said Williams said.

Dinosaur Ridge is also hoping to do some other fun dinosaur art projects soon, she said.