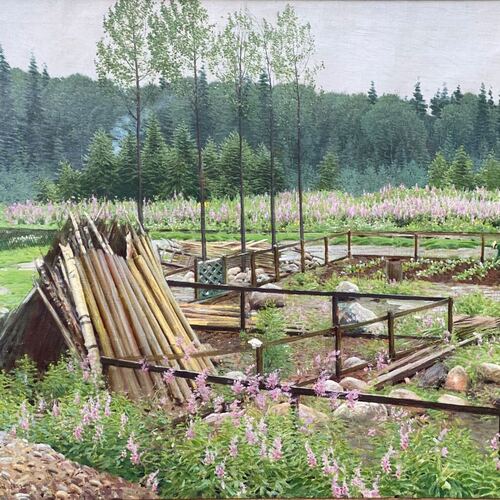 When the Impressionist movement took hold in the United States in the late 1800s, Connecticut became a magnet for artists seeking inspiration. A new exhibition State of inspiration: the art colonies of Connecticut, featuring works by the state’s top impressionists, will open with a champagne reception on Friday, March 18 at 7 p.m. at the Darien Museum.

Featuring 40 paintings from the collection of Tom and Marianne Davies of New Canaan, the exhibition explores the unique appeal that Connecticut offered to young artists returning to the United States after studying abroad. Many of these artists chose to settle in six communities that evolved into Connecticut’s art colonies: Cos Cob, Silvermine, Westport, Old Lyme, Mystic and Kent.

Clusters of artists gravitate to the East Coast to be closer to major cities, display their work and attract potential clients. Paint outside in the countryside was also a priority for these impressionist artists. “Connecticut was a great place. Not only was it close to Boston and New York, but it also offered a host of attractive coastal and pastoral settings,” Davies explained.

As artists continued to visit, many eventually established homes and encouraged friends and other artists to do the same. “Not to be overlooked, another major benefit offered by the state at the time was cheap rent,” Davies said.

One of these artists was Frank Vincent Dumond, who painted Old Lyme Gardens (c. 1915), an oil painting on canvas in the exhibition. Described as an “art treasure” by one critic of the time, Dumond arrived in Old Lyme in 1902 and made his home there for the next 49 years while also attending the Art Students League of New York. Among his most renowned students were Norman Rockwell, Georgia O’Keeffe and the modernist John Marin. His color theories continue to influence students today and his particular fondness for the color green, as seen in this work, has come to be known as Dumond Green.”

To register for State of Inspiration: Connecticut Art Colonies Opening Champagne Reception visit the Museum’s website at museumofdarien.org or call 203.655.9233. The cost is $40 for members and $50 for non-members. The Darien Museum is located at 45 Old King’s Highway in Darien, CT.

Established in 1953 as the Darien Historical Society, the Darien Museum invites all ages to experience and learn about the crafts, stories, and artwork that have shaped this community. We tell the story of Darien, from its beginnings as a parish in Middlesex to the thriving community we know today. Come celebrate the history of our city with us! To learn more about supporting the city’s history, visit our website at museumofdarien.org or call us at 203.655.9233

Should you ever get a payday loan?