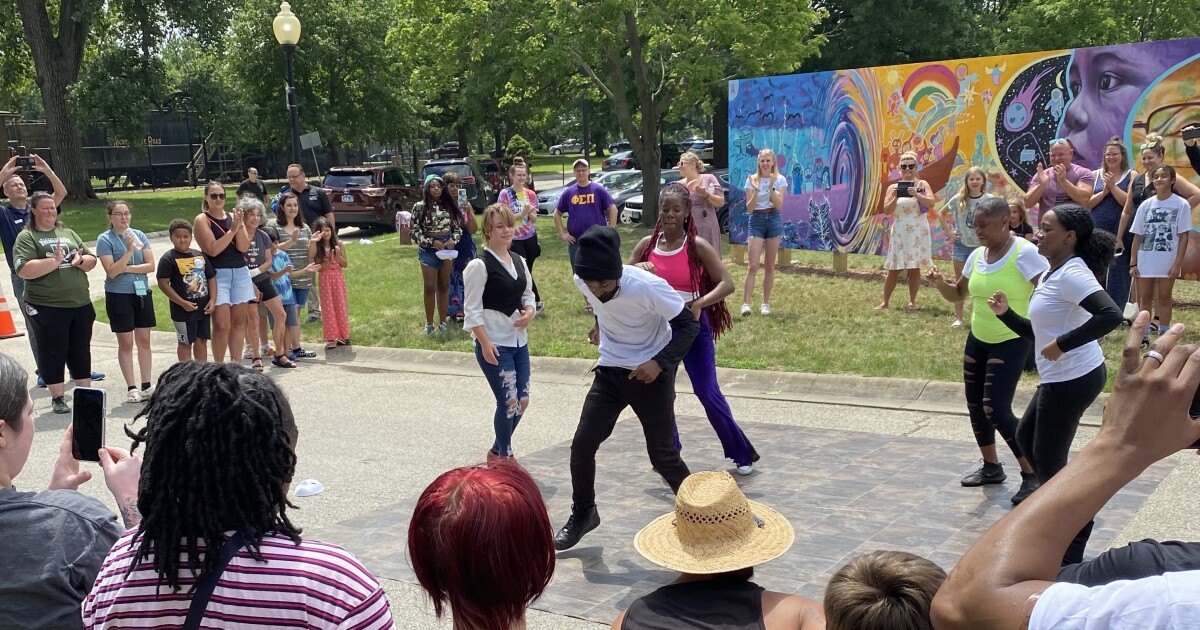 A crowd gathered in Miller Park over the weekend to celebrate a new piece of public art created by local youth. The project was a joint effort between Illinois Art Station, Artolution, the NAACP Youth Council, and Western Avenue Community Center, among others.

More than 40 young people worked with Twin Cities native Joel Bergner, who leads the nonprofit global arts initiative called Artolution, to design the mural around the theme of creating safe spaces. In prepared remarks, Bergner said one of the main goals of the project was “to bring all kinds of people together in the community to connect with each other and form positive relationships.”

Attendee Mackenzie McCray explained various aspects of the large, colorful board near the north entrance to the park. The four distinct sections of the mural include community portraits in the center, a peacock representing peace, ‘dystopian unity’, harboring ‘feelings of depression and all the bad things happening in the world right now’, they said. declared, and “a portal to utopia, where things are better and where there is a silver lining.

The piece is signed by the young artists and stamped with their fingerprints. On the back of the permanent mural structure (created with support from the City of Bloomington), facing the Miller Park playground, is a collage of smaller paintings framed by the mural wall support beams.

“Project Safe Space is a project that I and the officers of the Bloomington Police Department will cherish forever,” Chief Jamal Simington said. “We place great importance on working with those who serve to have a safe community that provides a safe space for our children – the future of tomorrow – to grow, be independent, build confidence, collaborate, learn and thrive, without prejudice, prejudice, violence, fear, conflict, criticism and mistreatment.

Looking ahead to his appointment in October 2021, Simington has identified building trust and community engagement as key aspects of his vision for the police service.

This latest youth mural project adds to a growing collection of permanent public art around Bloomington. Previous projects have resulted in murals on Constitution Trail near Washington Street and at the intersection of West Market Street and Morris Avenue.

The initiative was first conceived by Illinois Art Station founding director Laura Berk, who serves on the boards of Artolution and the Illinois Art Station Foundation. Berk visited the mural almost daily during its two-week development and made remarks at the unveiling.

“Now we have this beautiful, powerful, complex, permanent reminder of what a safe space is,” Berk said. “So much to take in and so much to do in our daily lives to translate these ideas into reality.”

The ceremony ended with the crowd forming a figure surrounding the young dancers of BCAI’s Arts and Humanities Dance Team – and the Cupid Shuffle community.

The best shows in Scottish galleries this week