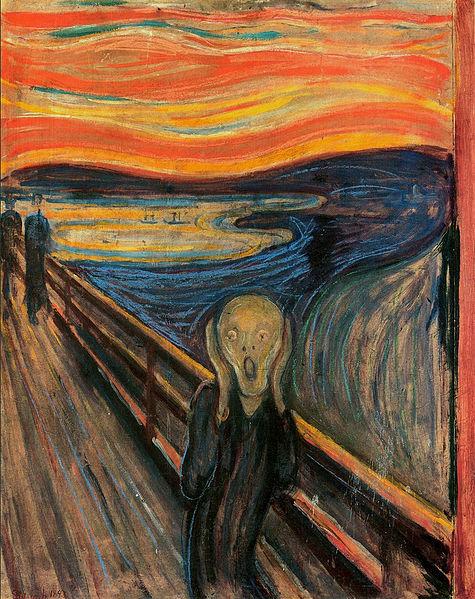 Last Friday I visited the Munch Museum in Oslo, Norway. It was a glorious evening, and the sunlight had a shimmering silver quality as it reflected off the fjord. Inside the gallery however, the light was dimmed, meticulously controlled to allow the preservation of the museum’s treasures. Of course, such measures are necessary for the life and future of precious works of art. But the stark contrast between the beautiful summer sunlight and the dry darkness of the museum made me wonder about other unintended effects of conservation measures.

Edvard Munch is best known for The Scream, a series of paintings, pastels and lithographs bearing the instantly recognizable twisted face of a soul encountering existential terror. Munch, describing the inspiration for The Scream, recalled that he had gone for a walk at sunset when suddenly the light of the setting sun turned the clouds “blood red”. He felt an “enormous infinite scream crossing nature”.

The Scream exists in four primary versions: two pastels (1893 and 1895) and two paintings (1893 and 1910), as well as several lithographs. All versions of The Scream were created on cardboard or paper, which makes them more fragile than oil paintings on canvas. They are also prone to disintegration due to temperature, humidity and exposure to light.

At the Munchmuseet there are three versions of The Scream — a painting, a pastel drawing and a print. One of them is always visible while the other two rest in darkness. I fell into this darkness on the fourth floor of the museum. In a kind of exhibition within the exhibition, the three images were presented in rotation, changing every hour. I arrived at the museum at 7:30 p.m., to find the lithograph on display. I returned to the darkened room half an hour later, hoping to see the painted version, but to my chagrin, it was the dullest and least impressive pastel on display. The museum closed at nine o’clock. I have never seen the painted version.

Walking through Munchmuseet I was struck by the large number of unfinished and damaged paintings, prints and drawings. Half-finished sketches were displayed alongside peeling paint; prints with water stains and yellow age spots hanging from the sides of ragged canvases. I wanted to run my fingers over the matte surface of Munch’s paintings; feel the rough, crumbly edges of his drawings, sniff the pages of his diary.

There is something wonderfully human and tangible about works of art – or indeed any vestige of precious life – that has not been covered in smooth layers of varnish buried for decades in dark vaults. Munch intentionally left most of his works unglazed so that the subtle variations in gloss, saturation, hue, and texture could be fully appreciated. In fact, he hated the then compulsory varnishing of oil paintings, calling this varnish “brown sauce”.

Munch, although he considered his paintings his “children”, was something of a neglectful father. In addition to his non-traditional painting techniques and materials, Munch was rather unconventional in his storage of works of art. Munch bequeathed his art collection to the city of Oslo, and upon his death city officials were astonished to find pictures, tools and books strewn about his large villa in Ekely.

Many of Munch’s paintings display the additional artistic input of birds and animals, as evidenced by myriad paw prints and bird droppings. It has stored a number of paintings outside, and several paintings also feature human footprints, remnants of water damage, and candle wax. In addition, earlier and more clumsy attempts at conservation marked his works.

Indeed, Munch was a renegade artist from the start and wanted his works to have a life of their own. He took great delight in confusing contemporary art critics who mocked his “random patches of color” and accused him of exhibiting “an abandoned, half-erased sketch” by employing large, rough brushstrokes, or highlighting his paint and letting it flow freely. canvas or cardboard, so that the streams created their own little rivers and paths through his strokes.

The two painted versions of The Scream were stolen and recovered; one from the National Gallery in 1994 and one from the Munch Museum in 2004. The Munch Museum painting – that painting I was so close to, but didn’t see – was rather damaged during its two-month hiatus years from the museum, and returned with a visible water stain in the lower left corner. Before repairs and restoration began, the damaged painting was on public display for five days, with more than 5,500 people flocking to see the prodigal son.

I can’t help but feel like there’s something more beautiful about the ephemerality of works like The Scream series. There’s something profound about having the honor of seeing a painting in the flesh – an honor not necessarily bestowed on people in the future who might behold a more faded and flaky version, or never see the original works. themselves.

There’s also something delightful about the fact that Munch allowed nature – the wind, the rain, the birds and his beloved dogs – to make their own contribution to his works. From their conception, its “children” have never been static. They have grown and changed over time, and will continue to do so, despite the best efforts of the curator.

Last summer, my siblings and I collected seashells at every beach we visited, from Mangawhai Harbor to Waihi Beach. We carefully washed these treasures, then sat down one sunny afternoon and painted them in a kaleidoscope of colors, lines and patterns, finishing them with a thin layer of clear nail polish from the two-person boutique. dollars. We then placed these brightly colored shells on the grave of our brother John, at the edge of Waihi Cemetery.

I know, despite the nail polish, that the wind and the rain will get the better of these little gifts. I know that when I return this summer, the shells will be faded, the paint chipped from the rain and small traces of insects may be visible on their surfaces. But these shells will be all the more beautiful as these other non-human visitors enter, for the inclement weather of the time they kept company at my brother’s grave while I am away, on the other side of the planet.

These garish little shells cannot compare to the profound impact of Munch’s work. They will never be hung in galleries, nor reproduced on countless tea towels and posters. But Munch’s seashells and artworks have their history written all over them and will continue to evolve and change so that every viewing is a totally new and unique experience.