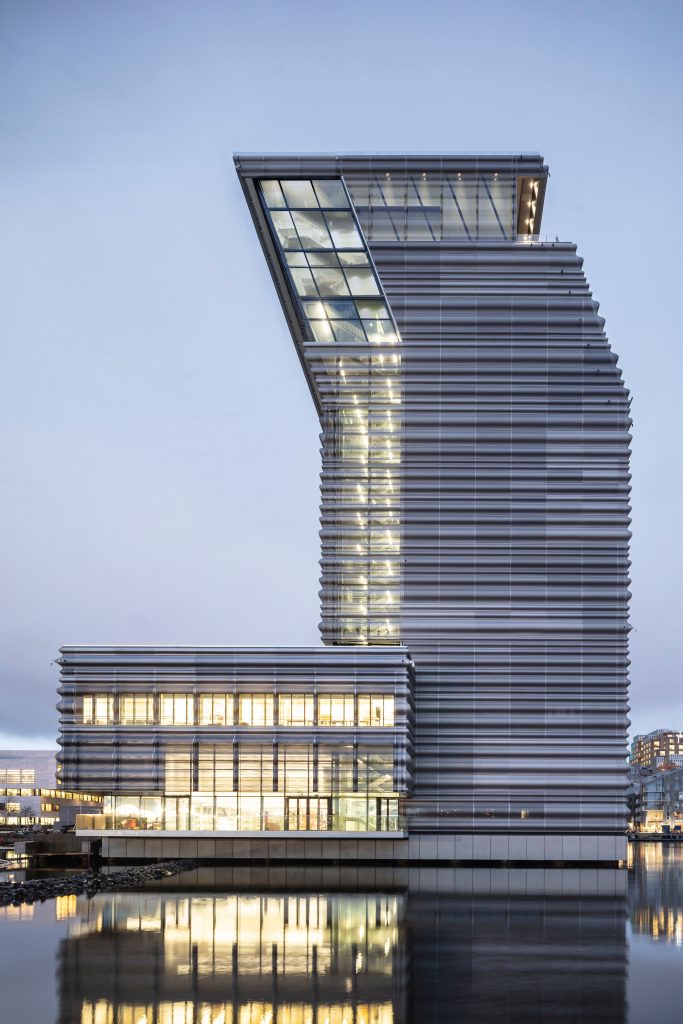 Norwegian artist Edvard Munch died in 1944 and bequeathed his entire estate to the city of Oslo. It was a huge bequest of almost 28,000 works of art and more than 42,000 objects, including texts, letters, photographs, equipment and other personal possessions.

Discussions about a future museum had begun while the Scream painter was still alive, but it wasn’t until 1963 that the museum actually opened in Oslo’s Tøyen district. But the building quickly became obsolete even after a renovation in 1994. The city council approved a plan to create a new museum in 2008 and the foundation stone was laid eight years later.

The 13-story, 60-meter-tall museum, designed by Spanish architects Estudio Herreros, opened to the public last October. It houses the artist’s legacy as well as three other collections, that of businessman and collector Rolf Stenersen, Norwegian painter Amaldus Nielsen and Norwegian artist Ludvig Ravensberg. The museum’s opening exhibition showed the works of British artist Tracey Emin alongside those of Munch. Emin said, “As an artist, Munch had the biggest effect on me.”

Here, Stein Olav Henrichsen, the director of the Munch Museum, talks about the importance of honoring the artist and his work.

What is the lasting appeal of Edvard Munch?

Stein Olav Henrichsen: He was one of the most important artists of modernism and undoubtedly Norway’s most important contribution to the art world. We continue to see growing interest in him and his artwork both nationally and internationally. His diversity as an artist and his tenacious experimentation in painting, graphic art, drawing, sculpture, photography and cinema have given him a unique position.

At the new museum, we are showing more Munch than ever before and the collection now gets the place it deserves. Finally, we put Munch’s art in context with other contemporary artists to show how relevant he is as an artist today. Our mission is that you never leave the museum unmoved.

How does the architecture reflect Munch’s work?

Munch is about not accepting conventional rules, fighting opposition, never giving up. The building is there, it has a powerful presence and it is part of the city. The design by Spanish architects Estudio Hererros is bold. As Joan Herreros says, “It says ‘here I am. I hold the legacy of the most important artist in Norwegian history, and I look to Oslo and the fjord with fascination because it is the city and its collective dreams that built me.’”

Is the museum sustainable?

The museum was designed according to FutureBuilt criteria, which means that it must at least halve its greenhouse gas emissions compared to conventional modern buildings. Its compact shape, high quality windows and partially natural ventilation allowed the building to achieve the desired energy savings.

The building does not have parking spaces. Its location very close to the city’s largest public transport hub and its 100 bicycle parking spaces eliminate any need to arrive by car. All of these measures contribute to ensuring that the museum has a lower energy consumption per square meter than the original building in Tøyen.

Tell us about your exhibition program?

We opened with Tracey Emin and Munch, and one of the next exciting exhibits is a collaboration with Norwegian black metal band Satyricon. We were in touch with the band about using Munch’s The Kiss of Death lithograph as the cover image for one of their albums. The museum enjoys exploring new connections to Munch’s art and this project will create an exhibition where music and art are experienced together. Satyricon composes the music and the museum curator selects Munch’s works.

Can you describe the museum’s research?

One of the most important tasks of the museum is to generate and disseminate knowledge about Munch and his art. In addition to traditional research in art history, curatorial and collections management, we also conduct research in areas such as learning, digital communications and audience experiences.

Our researchers study the importance of Munch’s choice of materials, past conservation measures and the current conditions of the works. The results help us identify potential methods of preserving Munch’s art for the future. In recent years, a major effort has been undertaken to digitize Munch’s writings and correspondence, in addition to translating his writings into other languages, including English.

Easier access to Munch’s art and writings led to increased research in Norway and abroad. During the coronavirus crisis, we have stepped up our work to create digital art experiences for people who cannot visit the museum physically, including live streams, digital workshops, guided tours and panel discussions in line.

What future for the museum?

Such notable interest in Edvard Munch means that we can loan works to renowned art institutions around the world, which, thanks to the facilities of the new museum, allows us to borrow works of art and bring them to Norway works of art that have never been exhibited here before.

City of Oslo with the support of the Norwegian State

Sandra Mujinga, until April 3; The Savage Eye, until May 8; Satyricon & Munch, April 30–August 28

The beauty of the fleeting world