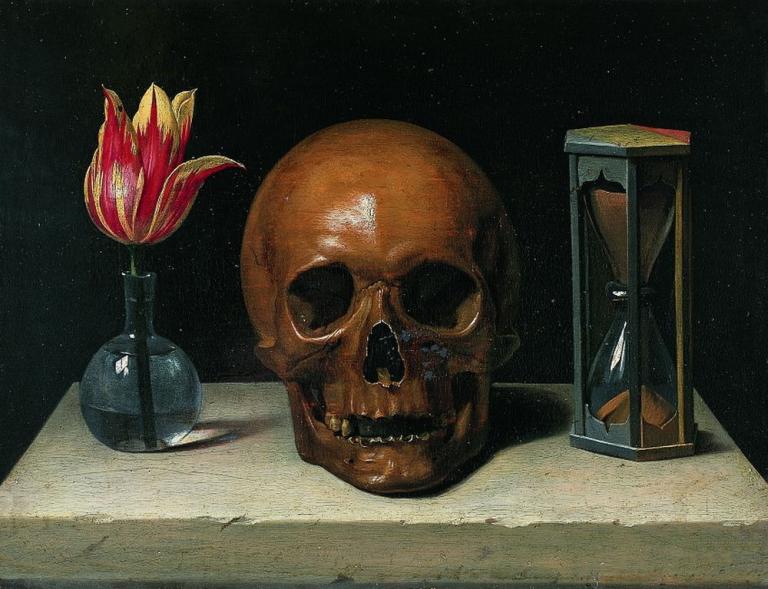 Memento Mori: The Contemplation of Death and the Wonder of Life

Twice this week, I learned of the death of an acquaintance. I hesitate to say “friend” because none of these people were friends in the strict sense of the word: one of them whom I had not seen or been in contact with for nearly four years, the other since the mid-1990s. But they were two men I liked and both knew through the church. One was a Jesuit priest in my parish from 2017-2018, the other the organist at Fran and my marriage, at the Episcopal Church we attended in the 1990s.

Pr. Rudy Casals, SJ was 47 years old and died in his sleep a few days ago. About a month ago, organist Randolph S. James passed away peacefully (I don’t know the details). He had just turned 61.

These two guys were younger than me.

Remember, you are dust…

In his classic book Mysticism, Evelyn Underhill boasted that mystics tended to be long-lived, noting that Hildegard of Bingen, Mechthilde of Magdeburg, and John Ruysbroeck all lived into their 80s – no mean feat in the Middle Ages. We could add to his list Saint Anthony the Great, who is said to have lived to be 105, Thomas Keating who died at 94 and Ramon Panikkar who died at 91. But let’s be honest and recognize that other mystics died way too young. : Thomas Merton died at 53, Jean de la Croix at 49, and Thérèse of Lisieux succumbed to tuberculosis at just 24. Underhill herself died aged 65, only four years older than me today. It is humbling to consider these things.

But having lost a friend who lived to be 101 (Father Luke Kot, a dear old Trappist monk who knew Thomas Merton), family members in their late 30s to early 90s, friends at different ages and my daughter Rhiannon at 29, I’ve come to see that no matter the cause, no matter how expected, every death feels like it happened too soon. I don’t think that’s a bad thing, on the contrary, grief and bereavement are shaped by the depth of our love. And even though I was hardly a close friend with the Father. Rudy or Randolph, both marked my life and both were people I really loved. That, apparently, is enough for me to feel the twinge of grief.

In his Rule for monks, St. Benedict sternly proclaims “We must therefore beware of all base desire, for death is placed near the door of pleasure.” (RSB 7:24) But beyond that, the great master of Western monasticism makes few references to death in his rule, mostly quotations from Scripture. It goes against our popular image of scrawny, emaciated monks, dressed in hair-shirts and prone to self-flagellation, sleeping in coffins and keeping a skull on their desk to always remind themselves of their own eventual demise. Indeed, the concept of Memento Mori – be aware of your mortality – has become something of a trope in Western art, like the image above (Philippe de Champaigne, Vanity, vs. 1671) and below (N. Johann Strixner, A monk contemplates a skull by candlelightlate 1500s/early 1600s) illustrate.

I suppose, like most people, I always thought the idea of ​​meditating on a skull was scary, if not downright macabre. Such an exercise seems to belong to extreme Calvinism and Jansenism, based on the rejection of the wonder of life and offering no real benefit to the person meditating. But these days, I’m a little less judgmental about this idea of memento mori. I don’t rush to put on a skull my office, watch out! But the older I get, the more death appears in my life. When I shared the news of Randolph’s passing with Fran, just days after being shaken by the father’s sudden death. Rudy, Fran simply said, “We’ll be dealing with that a lot in the years to come.” She’s right. I still remember talking on the phone with my mother when she and my father were in their 70s; it seemed like every time we spoke she would tell me about another friend or loved one who had passed away. Eventually I noticed it wasn’t happening as often, and realized it was because my parents had lived long enough to get to the other side of the bell curve.

Where, O death, is your sting?

When Rhiannon went to the hospice, I read several books about death and the dying, such as Last gifts by Callanan and Kelly and Knock on heaven’s door by Katy Butler. But the one that really stood out to me was grace in dying by Kathleen Dowling Singh. I don’t remember how I came across this book, I thought it was mentioned in Last gifts but this is not the case. Somewhere, maybe online, I read a reference to Singh’s book that described him as a real contemplative reflection on death and agony. That was all the encouragement I needed. I downloaded the book the week after Rhiannon went to hospice. When I opened it, I encountered these words:

At the time, we thought Rhiannon only had about three weeks – but since it was more than a few hours or days, I kept reading (she actually lived another seven months). Hands down, this is the best dying process book I’ve come across. Here is just one of the many treasures:

There seems to be a universal sequential progression towards deeper, more subtle and more enveloping dimensions of consciousness, identity and being as we begin to die – a movement from the periphery towards the centre. Moreover, I realized that the transformation I observed in people near death was the same psychoalchemy – in a very accelerated mode – that I had noticed in myself over two and a half decades of practice. of contemplative disciplines and in people with whom I had worked as a psychospiritual counselor.

In other words, a contemplative practice – like centering prayer, Christian meditation, or the Jesus prayer – works in the soul to create a process that mimics the experience of death. When we place our attention in contemplative awareness, we step into the same vast, spacious, magnet silence that will meet us all when we die. We don’t do it because it’s morbid or macabre. We do this because, as Singh points out, it is sure. All of our moments spent in centering prayer or other types of silent meditation are gentle and caring “dress rehearsals” for the final act of each lifetime: the exhaling of death, the consent our bodies will finally make to free our spirit in the silence of eternity.

Be aware of the silence between and under your thoughts, feelings and mental images is to commit memento mori – not a macabre obsession with death, but an open and spacious relaxation – in the truth that death is the completion of all life. When we think about it, we get caught up in our words – and the emotions they invoke, usually ego-driven feelings like anxiety or fear. “Words are the most powerful form of selective attention,” notes Kathleen Dowland Singh. Words are, by their very nature, dualistic: for they all mean something, dividing our attention into ‘this’ and ‘not-that’. But below and beyond all our words is the vast haven of divine silence, and silence — which is not an absence, but a presence — does not rely on these dualistic machinations of mindfulness. discursive to be present to us. Silence, like God, simply is. In silence we can rest, we are safe, we are invited to calm and peace. As great contemplatives throughout the ages have noted, we often bring our own lack of peace with us into the silence, often our sins, traumas, and passions that need healing or at least appeasement. Silence is a generous host and a compassionate healer, so when we allow silence to meet our inner frenzy, we are invited into a place of regeneration and renewal. I think we can trust that this dynamic, available each time we sit down for a few minutes of silent prayer, will be infinitely available to us as we consent to our death, and move out of time and into the eternity.

I am heartbroken by the death of Rudy, so young and so full of life. And even though I hadn’t seen Randolph in years, the fact that he and I were so close in age also touches me. I am saddened by these two losses and also trust in the wisdom of our spiritual traditions that help us see death not as an enemy, but truly as a gift. It is small consolation for those who are grieving, and grief should be fully felt and experienced, because as I said, it is a dimension of love. And love, of course, is what makes life wonderful. A good death only makes sense in the context of a wonderful life. I know that both p. Rudy and Randolph lived well, and although I won’t be attending any of their funerals, I know they will be filled with mourners and friends. Of course, the measure of a life well lived is not just how many people are saddened by our passing. A person can die alone at the end of a wonderful life. What matters, it seems to me, is always the present moment: here and now, to find what makes life wonderful for us – to find it and immerse ourselves in it. I suspect that love is always at the heart of a good life, because love, after all, is how God manifests himself in our lives. So we all need to make it a priority to calibrate our lives towards love.

With that in mind, I hope your life is filled with love, today and every day. If you are alone, I pray that you can at least find the love of God in your heart and find a way to express it. If nothing else, love yourself. Trust that love has been poured into your heart by the God who is To like. And then look for ways to pass it on. Love well, and live well, and your life will be wonderful. And make time for silence, silent meditation and/or silent prayer: for that is your best preparation for a beautiful death at the culmination of your wonderful life.

Do you like reading this blog? Become a Patron and get early and exclusive access to more of Carl McColman’s writings!
Click here to become a patron.

There is still time to join the ArtWeek online auction

‘Something for Everyone’ — Porch-Art-Palooza Returns with Nearly 40 Artists, 30 Porches | Local