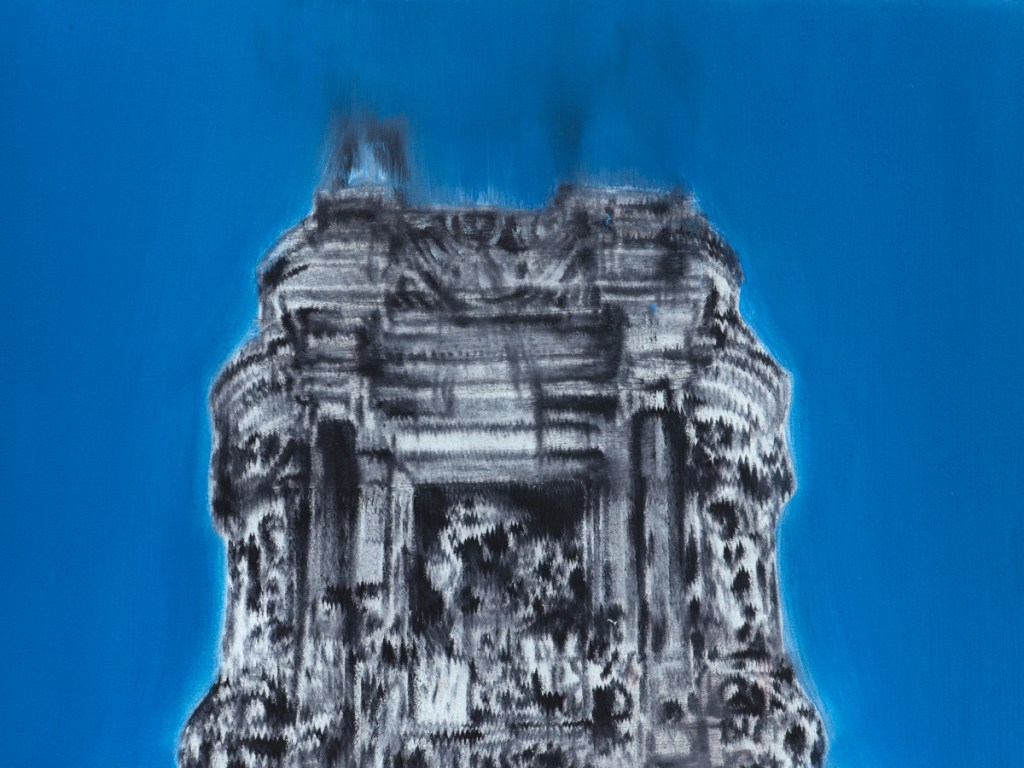 Faced with visitors arriving at this small but striking exhibition of works by Jorge Tacla is a painting of a large plinth, deprived of its famous subject. A pair of spectral gray spots rise from the plinth – at the base of which the viewer is placed in perspective – as a vague allusion to this absence. With its neo-baroque ornamentation stirred by the artist’s signature blurry brushstroke, part of his cold wax technique, the monument offers no clues as to its precise location. The title of the table, Occult Identity 160 (Hidden Identity 160, 2021), confirms this anonymity. But even in its solitude and the generic blue of its sky, the site hardly stands out from the news.

On a step from the foundation of the structure appears the word lives, barely noticeable amid other scrawls of illegible graffiti, but making the pedestal instantly recognizable – not as a specific site, but as part of global protests demanding justice for ongoing police violence against black bodies; it is a makeshift monument to all-too-common brutality. The vacant pedestal also evokes the ongoing discourse (to understate its frequent vitriol) about removing statues of white supremacists and slave owners. Tacla uses a finely honed combination of linework and color washes to create hazy, turbulent surfaces, a formal quality that underscores the ideological tenor of his imagery. The incessant agitation of his paintings gives even the most seemingly inert matter a sense of historical urgency.

If the bodies are absent from Occult Identity 160they are the sole object of Injury Report 22 (2022). Blindfolded, with clenched fists and open mouth – presumably in a collective chant – a group of women marched in the open air in what can only be a political demonstration, carried out in a public space, presumably urban, given the faint outlines of buildings in the background. Despite the threatening deep red sky, no injuries were visible. But the picture’s sense of impending violence erupts in Injury Report 17 (2022). Lying on the ground in a more compact and shallow space, a figure is either helped up or pushed down. Other indistinct figures surround him, one of whom holds out his arm in a sign of help or aggression. Bordering on abstraction, the striated tumult of the bodies is further blurred by drips of crimson pigment, both immanent to the scene and also a pictorial event accumulating on the surface of the painting. The canvas itself seems a bloody victim of the same demonstration.

Although these works are still widespread, images like October 25 #4, 2019 and October 25 #5, 2019 (both from 2022) evoke through their titles recent episodes in the political life of the artist’s native Chile, with protesting crowds, still totally anonymous, constituting the formal raw material of the images. The latter divides his multitudes into six large monochromatic sections surrounding a central rectangle of bright red: an architectural sketch of a street lined with buildings, possibly representing a site of trouble. The first work mixes body and urban landscape: a monument at the heart of the painting appears engulfed by flags and bodies that have snatched its historical importance for their own purposes. The flags appear as unreadable as the locale is indescribable. October 25 is the date of one of the largest mass protests in Chile’s history, which took place in Santiago in 2019 in response to the rising cost of living and social inequality, but l The vagueness of the scenes connects them to larger, contemporary global manifestations (like the Black Lives Matter Demonstrations his other images allude to). The expressly tangled faces and bodies in Tacla’s paintings create the distance one expects from a memory or a dream; their studied imprecision inflects their presence with the fleeting temporality of the ruins. The artist does not seem to take sides per se. But the fact of these demonstrations, this mixture of bodies in space in agitation for change, testifies to a vital human need, increasingly threatened. And the selection of events to which its titles refer, among which the explosion of Beirut in 2020 (in a set of paintings not presented here), indicates a sociopolitical orientation.

Even more striking than the artist’s expressly civic images are these urban landscapes evacuated of any identifiable human presence but charged with its effects. The United States Capitol stands at an oblique angle in Injury Report 16 (2022), in full allusion to the insurrection of January 6, 2021. Its nondescript buildings bathed in an ash red uniform, Occult Identity 163 (2022) suggests, with smoke or fire billowing from a burning central edifice, an unidentified country in political turmoil. Instead of his usual wax and pigments, the artist has added marble powder here, which gives the painting more substance and an eerie material gravity. The fact that the conceptual space between the sites named by Tacla – the beacon of Western democracy and “freedom”, the foreign shores where America sponsored illegitimate coups, and the monuments closer to home where an acute lack of freedom is named – has shrunk so drastically underscores the horrendous state of populist politics. Such is the subtle realization of Tacla’s painting: with this exhibition, he confirms his presence among those few contemporary figurative painters, from the late Juan Genovés to Julie Mehretu, still worthy of the title of “history painter”.