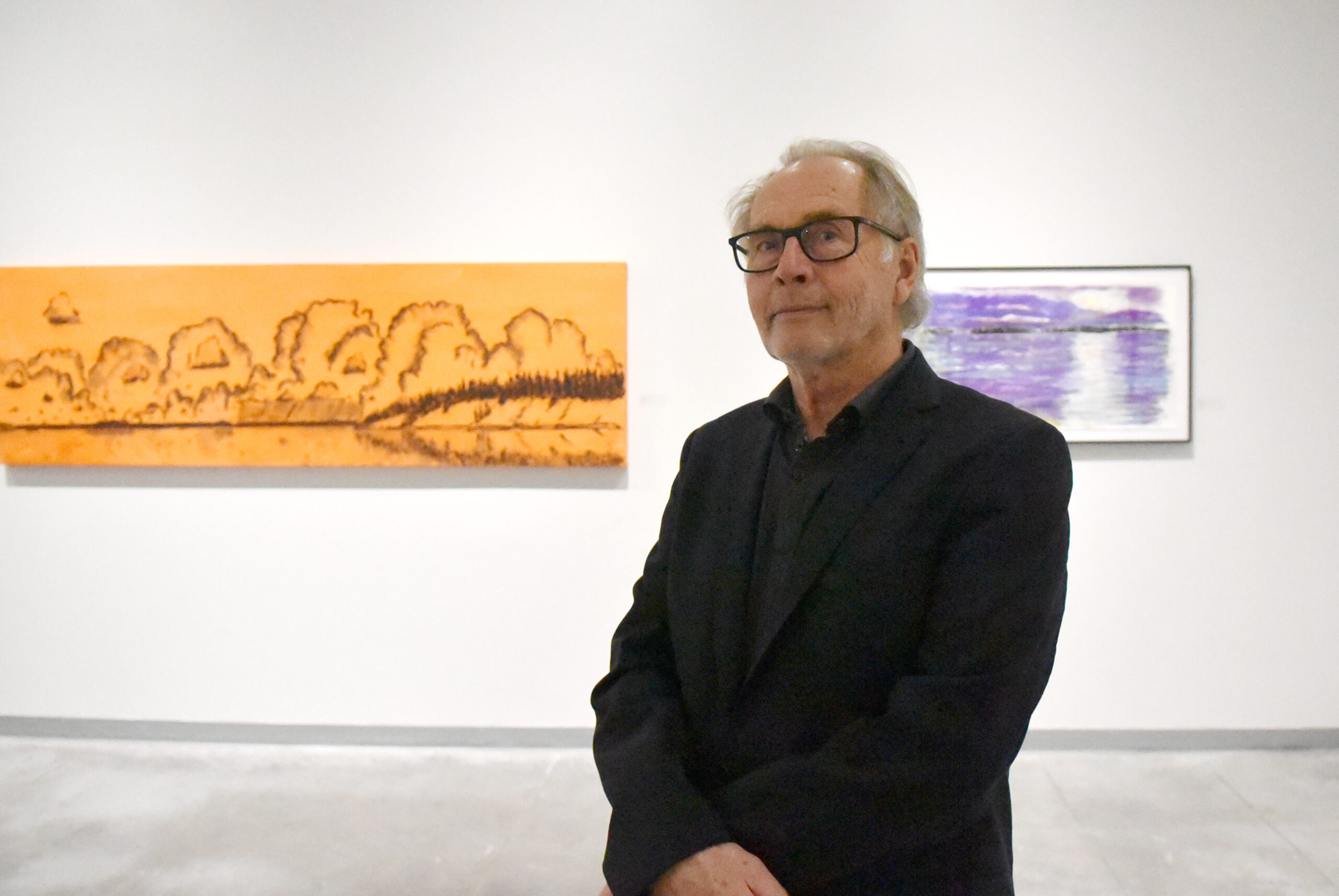 The exterior has entered the interior of the Mann Art Gallery, with simultaneous exhibitions by several artists who draw inspiration from nature in different ways.

For Ken Van Rees, it was while walking in a burnt forest near the South End (Reindeer Lake) that he wondered what he could do with charcoal and canvas.

â€œAs I was walking through the forest I looked at my pants, they were a light color and had all these charcoal marks on them,â€ Van Rees said at a reception hosted by the gallery on November 26. â€œI thought, oh, maybe I could do something with that and it started this long journey of creating art from the burnt forest.

Van Rees lets the forest, the wind and the weather do some of the work for him. He lays a canvas in a chosen spot, puts a burnt log on it and then returns days, weeks or months later to see what happened.

He also installed a hunting camera and became interested in seeing wildlife that stopped and sniffed or walked on the web.

â€œThere were all these animals looking at my artwork. There were deer, there were bears walking on my works. There were wolves walking around, â€Van Rees said.

Where most people avoid the scorched areas of nature and seek a lush green landscape, the fiery side of nature has a more visual appeal to it.

â€œMost of us prefer a green forest. This is what we love to camp or hike into. For me, because I worked on forest fires as a teenager and had that first experience with forest fires, it kind of resonated with me, â€he said. .

Van Rees’ art can be found at the Mann Art Gallery until January 15 and accompanies the work of well-known artist Greg Hardy.

Unlike the softer colors in Van Rees’ work, Hardy’s in some cases has bursts of orange and other bright colors.

â€œIt’s an exhibition of drawings from the La Ronge area, where I have a cabin on an island,â€ Hardy said.

About four years ago, Hardy was talking to the then manager of the Mann Gallery and accepted an exhibition of his drawings.

With the staff changes at the gallery and the pandemic, the exhibit took a long time to build up, but it is now on display.

Some of the designs were done decades ago and others are more recent, but the emphasis on the natural world is shared with Van Rees.

â€œI have an affinity for the natural world and paint a lot, but I always come back to its landscape that moves me the most as a subject,â€ said Hardy.

Hardy’s career has been established for some time and he makes it his full-time occupation, dividing his time between La Ronge and his main studio near Saskatoon.

â€œActually, this is a small sample of the drawings I have because I draw all the time,â€ Hardy explained. â€œIt’s mostly the scenery,â€ he said of his decision to work in northern Saskatchewan. “We used to go further north and do a lot of canoe trips and it had always been a dream or a hope to have a cabin in the wilderness at some point.”

An architect from Prince Albert had the cabin available for sale, so Hardy was able to purchase it.

â€œAs soon as I saw it I was like it was amazing,â€ he said. â€œThe topic was all around and I knew it was going to be very positive. “

Hardy paints or draws wherever he is, and is mainly inspired by the plains before taking an interest in the forest.

â€œIt was like a 15-year focus on Lac La Ronge and it remains a source of positive inspiration,â€ he said. “But that said, I change gears and head back to the plains.”

â€œThe more spectacular the scenery, the better. I feel more in tune with what happens if there is an impending storm or storm, â€said Hardy.

“And I have always been taken by the sky, since I was little.”

A third exhibition is in place at the gallery for the duration of the exhibition featuring Hardy with Van Rees.

Entitled “The Secret Is In The Paper”, the collection was curated by collections assistant Breanne Bandur and focuses on different approaches to paper handling.