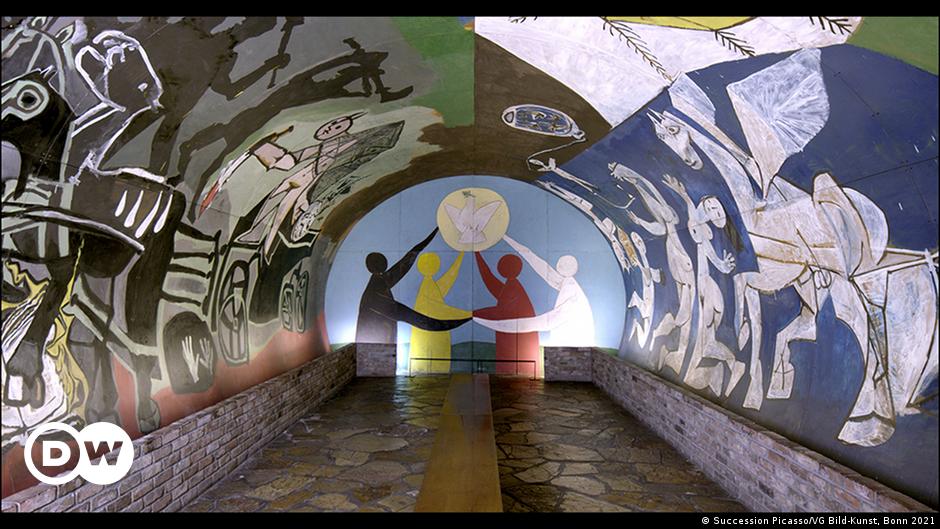 In 2015, the artist’s most expensive painting to date, The women of Algiers, changed hands for 179.4 million dollars (153 million euros).

Beyond the fact that Picasso’s works are always in demand, apparently everything has been said and written about the influential artist and sculptor of the 20th century, whose full name was Pablo Diego Jose Francisco de Paula Juan Nepomuceno Maria de los Remedios Cipriano de la SantÃ­sima Trinidad Ruiz and Picasso.

Yet curators are still finding new angles to approach his works.

An exhibition at the Ludwig Museum in Cologne entitled Shared and Divided Picasso: The Artist and His Image in East and West Germany, looks at the very different interpretations of the artist by the two countries.

The Iron Curtain, which divided the world for more than four decades into irreconcilable political blocs – socialism and capitalism – certainly played a significant role in how Picasso was viewed in East and West.

In 1944, Picasso joined the French Communist Party. He called it “a logical step in my life, in my work.” He participated in campaigns and traveled to peace conferences, for which he also created posters.

The exhibition features political works such as “Massacre in Korea”

He created political works like The Charnier, which depicts the horrors of the Nazi regime, or Massacre in Korea, on American war crimes. One of his most famous paintings is also an anti-war work: Guernica, named after the Basque city bombed by German planes. His series of murals War and peace were designed for a chapel in the communist-ruled village of Vallauris, in southern France, with the aim of creating a “Temple of Peace”.

But can a portrait of Stalin be reconciled with a Temple of Peace?

Many artists identified at this time with the socialist movement for peace, of which Picasso created the ultimate motif: the dove.

The painter, who even as a child made sketches of his father’s doves, continued to create variations of the bird thereafter.

His doves were particularly popular in the socialist German Democratic Republic (GDR). For example, Picasso’s drawings appeared on posters of peace movements and in textbooks.

As curator Friedrich speculates, they were “certainly more popular and perhaps even more widely circulated than the official national emblem of East Germany, the hammer and compass surrounded by a rye crown.”

Even though the artist was considered a model Communist activist, there were hardly any exhibitions of Picasso in the early years of the GDR. His anti-realistic style was rejected by the East German authorities, as the masses were supposed to recognize themselves in art.

The approach was completely different in the West.

Picasso was also highly respected in West Germany, but here he was promoted as a pillar of contemporary art. All kinds of exhibitions presented him as a revival of art and revered him as a charismatic genius.

In 1955, his Guernica was exhibited at the Munich art museum Haus der Kunst, but the Foreign Ministry in Berlin has warned curators against the work’s “political leanings”.

The political Picasso, says Cologne curator Friedrich, was largely hidden in the West.

Picasso shared and divided is on display at the Ludwig Museum in Cologne until January 30, 2022.

This article was translated from German.

The antagonistic art of Neo Rauch | The New Yorker