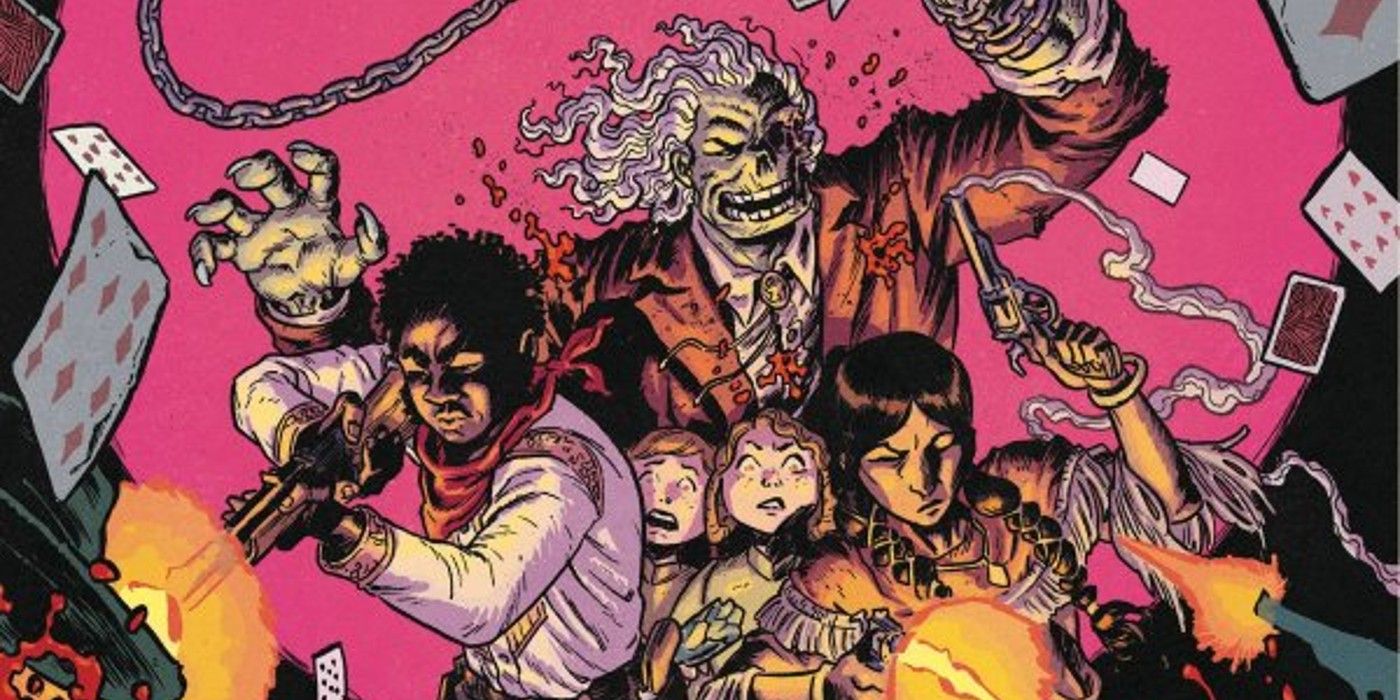 Chained to the Grave is a supernatural Western comic book series from IDW that mixes a vibrant color palette with magic, revenge, and horror.

Warning: Chained to the grave is a mature series and contains graphic language and images!

Chained to the grave, of IDW publication, gives a new twist to two classic genres: horror and westerns. Fans of either may have ideas on what they should bring, but this comic subverts expectations at every turn, delivering a fresh, vibrant take on a familiar setting that doesn’t shy away from stray into the realm of the strange. It’s not traditional, but that’s exactly where its charm lies.

The creative team behind Chained to the grave includes Andy Eschenbach, Brian Level, Kate Sherron and Micah Myers. Eschenbach wrote comics such as Tezcatlipoca Jones, as well as the series (Angels wanna wear my) red shoes. Level is a writer and comic book artist who has worked on comics, including Star wars, Batman, Deadpool, and others. Sherron is a professor, artist, and comic book author who worked on Invader Zim, My little Pony, Adventure time, and The Amazing World of Gumball. Meyers is a comic book writer named Ringo who has worked with Dark Horse, IDW, and Aspen – as well as other publishers.

Related: Music and Story Come to Life in IDW’s Ballad for Sophie (Exclusive)

Chained to the grave tells the story of Roy Mason – a man living in the Old West who finds himself caught up in a plot centered on gold and occult magic. He was involved in the attempt to move gold for some people whose secrets he discovered, which failed to complete the work in this IDW series, resulting in his death. Now he has returned from the dead and is trying to protect his family while avoiding and trying to defeat his enemy, who is called Big Bad.

When it comes to westerns, this story contains many familiar elements of the genre. Revenge, gold, Native Americans, horse racing, and trains are all recognizable. However, this series mixes them up in a new and sometimes weird way. Western traditionalists probably won’t find much to appreciate here. The art style is more cartoonish than you might expect for the genre and the supernatural elements break the standards. This distinctive art style is accompanied by handwriting featuring a wide range of swear words, emphasizing that this is not your grandfather’s typical western.

This comic has a few peculiarities. Character development is lacking in many ways and it’s hard to feel a sense of attachment to someone in particular. The main group is diverse and entertaining, although they rarely feel like a cohesive group showing growth. They are the quintessence of a motley team. The same goes for the villains, which are a mix of interesting quirks, but also simple patterns. The Native American aspects seem slightly disjointed and at times stereotypical due to the show’s reliance on magic and shaman mysticism. However, this places a Native American woman in a position where she can be effective as a powerful ally in combat. It’s a nice change of pace for the western genre. However, some storylines involving him are left without any sense of resolution.

However, Chained to the grave is a vibrant and fresh horror comic book. It tells its story in a familiar setting without feeling like it’s been remade a million times – as many westerns do. It features many occult components that completely turn the dynamics of combat and conflict upside down. This non-traditional story knows how unexpected it is and embraces the bizarre wholeheartedly. The art in this comic is lively and fun, forgoing the typical grain and dust. Comic book readers who want something they’ve never seen before and who love genre subversion or surprises will love it IDW editions supernatural western Chained to the grave and can check out the series’ collection when it releases on December 7.

Samantha King is a comic book writer for Screen Rant. She holds a BA in English and American Literature with a concentration in Shakespeare and a minor in Creative Writing from UTEP. She also holds a master’s degree in library science from the University of North Texas. Samantha used to get in trouble reading comics in high school class, but she has the last laugh. She took a graphic novel course in college and is now paid to write comics. She runs her own blog at: www.therealworldaccordingtosam.blogspot.com