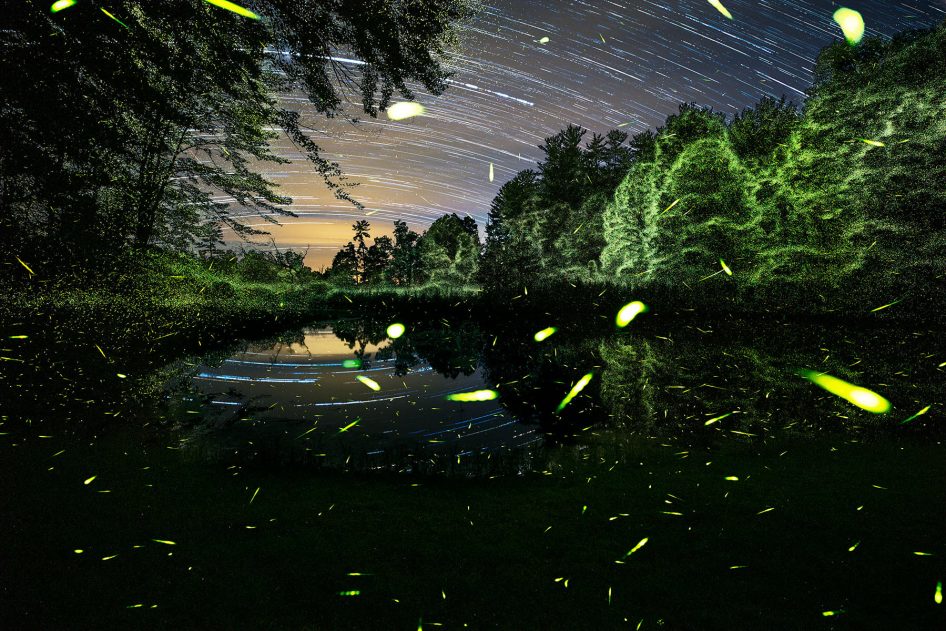 Hudson Hall Presents “The Enigmatic Artists of the Hudson Valley”

Photographer Pete Mauney’s work explores the erratic and surreal systems of fireflies, whose bioluminescence is translated into pulsing green color fields through the artist’s camera. Photo by Pete Mauney, courtesy of Hudson Hall.

Hudson, NY— As summer draws to a close and the autumnal equinox approaches, transition abounds in the natural world. Although evolving, the phenomenon is far from enigmatic. In fact, the arrival of autumn in the northern hemisphere is marked by abundant light: September 22 is one of only two days when the sun, placed directly above the equator, apparently divides the night and day in equal parts (hence the etymology of the word equinox, which derives from the Latin for “equal night”). As locals are well aware, daylight hours will decrease significantly by the winter solstice, the shortest and by extension darkest day of the year.

The timing is nonetheless fortuitous for a trio of upstate artists who, drawing inspiration from the beauty of the Hudson Valley to create unique works of art that embody the complexity of the natural world, are part of of a joint exhibition at Hudson Hall.

“Enigmatic Artists of the Hudson Valley” – featuring the work of Lois Guarino, Stan Lichens, Pete Mauney – stems, in its genesis, from careful observation. Whether it’s a response to surreal systems of fireflies, the slow decay of the river’s edge, or an exploration of the interconnectedness of all life on earth, each artist brings the natural world to the forefront in his respective works, regardless of the chosen medium, each of which differs from the next.

Photographer Pete Mauney’s work explores the erratic and surreal systems of fireflies, whose bioluminescence is translated into pulsing green color fields through the artist’s camera. Based in the Hudson Valley, Mauney finds concentrations of regional populations of individual and mixed fireflies and attempts to capture not only their mass but also their “temporary ubiquity” through long exposures to the insects’ self-generated light. “Flash patterns, seemingly random travel patterns, unpredictability and overwhelming beauty are the experience,” he says while pointing out the real benefit: “I was lucky enough to capture some reflections of this experience with my cameras.

Lois Guarino takes a decidedly different approach, first painting, then assembling, canvas mosaic squares to create powerful visual statements. His largest work to date, “The Wonder Wall”, comprises 1000 separate paintings. “I’m a multimedia artist and a student of the Human Being program, which includes a deep reverence for animals,” says Guarino, who uses oil paint “to create images that explore the interconnectedness of all life on earth. and our origins in the complex, mysterious universe.

For two decades, Stan Lichens enjoyed walks along the Hudson River; in the years that followed, he noticed a gradual rise in the height of the river and its slow destruction of trees and shoreline habitat. The decision to document this phenomenon using photogrammetry – a process using software to create 3D shapes of objects photographed from multiple angles – resulted in myriad models made using a 3D printer coupled with environmentally friendly corn resin that has been meticulously coppered and patinated.

Hudson Hall, a historic and iconic building housing the oldest surviving theater in New York State, has long hosted artists from the area and beyond. Frederic Church and Sanford Gifford (first and second generation Hudson River School artists, respectively) exhibited paintings there in the 19th century; Albany-born writer Bret Harte read poems; “Blind Tom” Wiggins filled the house with his piano virtuosity; Henry Ward Beecher delivered a rousing abolitionist lecture; Susan B. Anthony has visited three times; and Teddy Roosevelt entertained a crowd. The current exhibition, which opened on September 2, will be on view until November 22.

REMARK: Programming at Hudson Hall is made possible by the New York State Council on the Arts, with support from the Governor and Legislature of New York. To plan your visit and view the organization’s full COVID-19 policy, visit this link.

A walk through the Wildflower Center’s Field of Light: Acclaimed artist Bruce Munro basks in the evening glow with his new installation – Arts