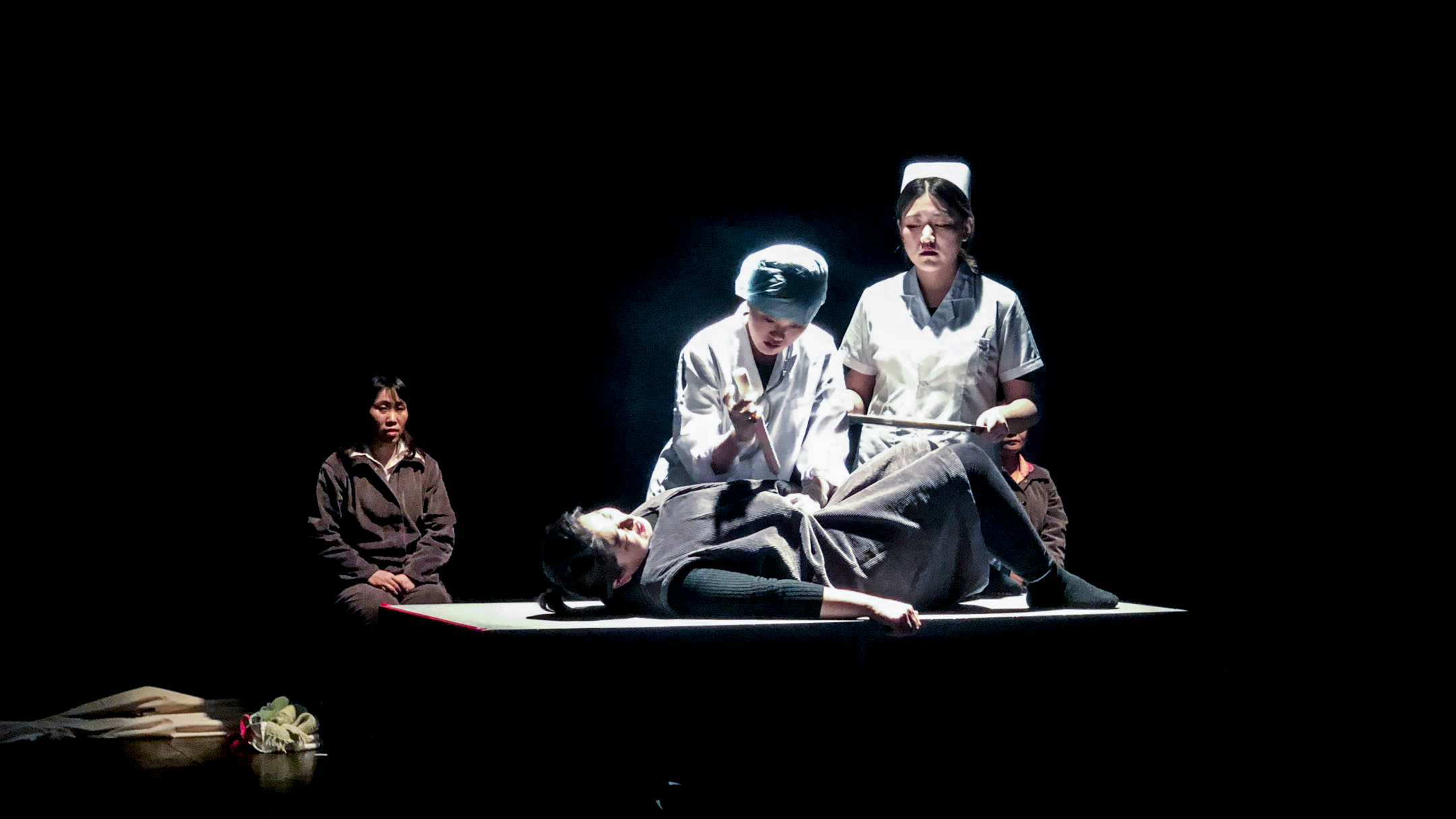 “Giving Birth” and Community Theater: Suturing Fragmented Relationships Through the Art of Pain

To give birth, an interview-based play co-created by Chinese artist-scholar Zhiyong Zhao and the Mulan Community Service Center, centers its narration around a group of female migrant workers in Beijing and their authentic tales of the pain of childbirth. An experience that is both personal and relatable, physical pain becomes an entry point for the public in downtown Beijing to learn more about the community of migrant workers, their cohabitants in this metropolis who are often unheard of and invisible.

The 2019 premiere of To give birth was held at the Juyin Theater, a 100-seat black box theater located in downtown Beijing, a 10-minute drive from Tiananmen Square. On a black basket is Liu Yun, a 45-year-old domestic worker and member of the Mulan community. She plays the role of a woman named Xiaoyu. She splits her legs. An actor playing his doctor touches her bulging belly, smells the head of the embryo, and pricks a huge injector into her body. The doctor cuts the flesh and bones with pliers and puts them in a plastic bucket. The audience holds their breath and this small space in the heart of Beijing is filled with the jittery sounds of clocks, crying babies and rapid heartbeats.

Through interviews and design workshops, To give birth extracts the real-life experiences of dozens of members of the Mulan community in one character, Xiaoyu, a young woman from an underprivileged rural province who came to Beijing for employment opportunities to support her family. Having no training in skilled labor, Xiaoyu becomes a domestic worker in a middle class household that performs basic cleaning tasks with meager pay and without a legal contract. Due to her early marriage, economic pressure from her family, and lack of proper education in sexual and reproductive health, Xiaoyu has had two deliveries and three abortions in five years. Xiaoyu’s story describes the common dilemmas of underserved working-class women: rude hygienic conditions, traditional patriarchal culture in rural society, heavy physical labor and its damage to contraceptive implants, unwanted pregnancy that ensues and the lack of care and companionship. Unlike the family planning challenges faced by urban middle class women, the pain of childbirth experienced by impoverished women is rooted in their socio-economic conditions.

Zhiyong Zhao has been a community theater researcher and practitioner for over ten years. A popular impression of community theater sees it as a cathartic channel for collective healing, to alleviate repressed trauma through artistic reenactment and expression. However, for Zhiyong, the notion of psychological healing is not only a precarious illusion, but also risks enchanting and obscuring the complex conditions of social reality.

The first time Zhiyong showed Liu Yun the script, she said with red eyes, “I can’t seem to finish reading this play, it’s too hard for me.” Liu Yun had remained calm and had not shed any tears during her interviews, as if she was telling someone else’s story. But when she watched the show the night of the premiere, seeing her pain portrayed on stage, her painful memory was brought up. Liu Yun admitted that the process of recreating her story had been painful, but she insisted on preparing to talk about it. “I felt that I had grown up throughout the process,” Liu Yun concludes.

For Zhiyong, the goal of creating To give birth is not the cathartic effect of healing, but of helping society see and understand the difficulties of migrant workers, which can be anatomized into the theme of childbirth. For example, in Xiaoyu’s story, it is carefully demonstrated why the protagonist had unwanted pregnancies over and over again, why she couldn’t afford abortion surgeries in a regular hospital, why she had to undergo the unauthorized labor and abortions on her own. Although childbirth is a physical experience, there are many socio-economic and cultural factors that underlie it – and it is for this dimension that Zhiyong wants to create a public space for discussion, rather than locking up. these factors in the victimized narrative of the trauma.

In one scene, a midwife in a rudimentary rural clinic tells Xiaoyu, “It is common to get an infection after an induced abortion. It is part of the life of women. Just apply drugs to your private part, no need to let someone else know and make a scene, “as if abortion is something devious and shameful. During Xiaoyu’s postpartum birth, a villager accuses her of idling all day to escape labor, claiming that “childbirth is not necessarily painful. It took my wife less time to give birth than it took me to collect the eggs in the henhouse ”. Xiaoyu’s physical pain is forced into a system of medical as well as patriarchal discourse and dismissed as trivial. To give birth emphasizes that childbirth is a matter of publicity confined to the realm of privacy, and the private nature of physical pain traps the victim in desperate isolation and helplessness, with her pain completely subject to distortion and sub -estimation in the public sphere.

Desperately, Xiaoyu can only express the pain of labor, infection, sting and laceration in the most spontaneous way on stage: moaning, crying, twisting and screaming. Ironically, in the face of this violent but powerful display of body language, all other form of dismissive speech appears overshadowed. Using the most natural expression of pain, Xiaoyu gave him back his own body and memory at a heavy price. Pain, as an unruly force, restores the body’s own sensations and biological expressions. In other words, while Xiaoyu feels and expresses her pain, her aching uterus is no longer the sacred palace of birth, her vagina is no longer a passage to life, her breasts are no longer a gentle source of growth. Rather, these became rebellious organs, escaping the strict patriarchal discipline of the body.

Not only did the Mulan workers generate the content for Xiaoyu’s story from their own experience, they also delivered it on stage as a set. To give birth illustrates a private experience by having one interviewee and three monologues (all of them migrant workers in Mu Lan Hua Kai) recounting and embodying Xiaoyu’s story together. When Xiaoyu undergoes an abortion and childbirth operation, the monologues simultaneously stage his pain through gestures, facial expressions and bodily movements.

The worker-actor ensemble forms a powerful embodiment of millions of working-class women in China on stage. Thanks to their overall performance, the pain of childbirth becomes shareable and questionable, thus binding the women in a close fraternity of solidarity. Individuals take back the sovereignty of their bodies by openly discussing their stigmatized pain, and by sharing that pain, they have transformed their suffering body into a public space open to liberation, comfort and understanding.

Beyond the bodily and gender experience, the most touching and stimulating aspect of To give birth is her thorough and truthful investigation into the intersectionality of the difficulties of working women. When we talk about women’s solidarity in a feminist context, one of the most difficult issues is the fragmentation of different groups within women – the fractured landscape of feminist discourse is waiting to be integrated. To give birth is not a radical feminist manifesto, or a simplified punishment against men, but an attempt to build a bridge of understanding between men and women, between the urban middle class audience and the working class creators / performers rural – between different groups of people who are isolated in rigidified social positions, to see each other’s real life.

Zhiyong remarks that “theater has the potential to transform into cultural practice and public action in a wider social arena”. Including To give birth, he led and participated in several long term projects with Mulan Community. Over the years, Zhiyong and workers like Liu Yun get to know each other, support each other, and make a very deep emotional connection. It becomes a complicity.

He does not ignore a common and fairly strong argument against community theater methodologies: when the logic of the art industry attributes the ownership and credits of the collective process to artists, it is inevitable that ordinary “civilians” are used and exploited by artists. In Zhiyong’s view, the work of artists today has largely become a matter of using their expertise to build a platform for public participation. The mode of artistic production has undergone such a profound transformation that if the finalized artwork is still signed with the artist’s name and exhibited in galleries and museums, or performed at art festivals, then it exists a logical and ethical paradox. The task of community theater is to suture the world of the arts with the world of reality and transform the theater into a space where we think, criticize and make change, instead of a magic box to re-enchant the relationships between people and their reality. .

In July 2020, To give birth presented their latest screening online, showing a recording of their 2019 live performance. As it reached a wider audience at home and abroad, many of the cast had already left Beijing and their communities in Mulan, due to the heavy impact of COVID-19 on housework such as housekeeping and cleaning. Now the only ongoing project at Mu Lan Hua Kai is an online photography workshop: Zhiyong invited a photographer to provide free cell phone photography vlog tutorials in a WeChat group, where community members are encouraged to take pictures of their everyday life, share thoughts and discuss.

It has been months since Zhiyong has been able to see one of the “sisters” in his community in person, but he occasionally looked at their photos in the WeChat group and got to know each other’s experiences and feelings in the community. in recent months. . Zhiyong says, “It really is a great way to maintain community, to give our sisters a sense of belonging and creative power, and most of all, to have fun despite the hardships of life. It’s a way for art to enter and engage in the lives of people that I really appreciate.

He thought he could outsmart the gig economy. He was wrong

“CashPlease”: a small bank launches an alternative to payday loans

Tacoma finances financing and payday loans on the web. Caught up in paychecks?