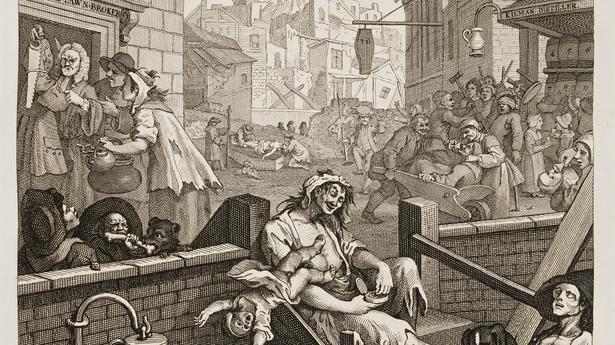 In 1751, English artist William Hogarth published twin prints, Gin Lane and Beer Street, to depict the “evils” of drinking gin versus the benefits of beer.

William Hogarth’s paintings depicted the harms of drinking gin contrasted with the merits of drinking beer, as many were unaware of at the time. While Beer Street flourished in good humor and abundance, Gin Lane was populated with death, despair and madness to encourage the English to speak out against gin (considered the only cause of immorality in society). These works of art were part reality and part propaganda.

Aparajita Ninan from Greater Than explains: “In 2022, the reality of gin has changed dramatically. It’s time for the most popular representation of it to change as well. With this in mind, the brand launched Greater Lane by Greater Than. Aparajita says, “Gin Lane was a piece of propaganda. With no other representation of gin at that time, it served its purpose. ”

So how did Greater Than choose artists like Bob & Bobby, Jasjyot Singh Hans, Priya Kuriyan, Priyesh Trivedi and Shweta Sharma? Aparajita says, “We looked at popular artists and focused on works of social commentary. As a result, the result was magnificent. Most artists decided to focus on life and society, some on private moments.

Bob and Bob: The original “Gin Lane” was designed to turn the crowd against gin, showing chaos and violence. So we tried to turn things around by keeping celebration, love and acceptance at the heart of it all. Our artwork is pro-love and pro-diversity, where people choose love over hate, win, and celebrate with their favorite drink. The most exciting part was the subtle layering of many messages and the ability to adapt an artwork made over 200 years ago.

Jasjyot Singh Hans: “Mehfil” is a reimagining of Hogarth’s original in a calmer and clearer context; the emphasis is on the novelty of an intimate moment. Here, laughter echoes in a surreal, crystalline landscape, as two friends share a drink over sweet nothings!

Priya Kuriyan: At first glance, Gin Lane almost feels like everyone is being hit by a pandemic, which is ironic because while working on it, we were in the middle of a pandemic ourselves. But what I love about the image is that every time you look at it, you notice something new. And so I wanted to create a Gin Lane that recalls this aspect of the original engraving, but is totally opposite to it. So I think that’s how I continued to create an image that was kind of joyful, intimate, and filled with things that I missed. Spontaneous encounters, fortuitous encounters, happy encounters.

Priyesh Trivedi: When I first saw William Hogarth’s original artwork, it felt like a parody of himself, like he was trying too hard to show the evils of gin drinking. The most exciting part of working on this project and my interpretation of Gin Lane was that it’s very much in tune with my practice, where I work a lot with vintage imagery and archival material, and recontextualize it to make it darker or more subversive, more ironic. And it’s also such a complex scene to work because there’s a lot going on and you have to make sure it’s obvious, like where it’s coming from, and there’s also your sense of artistic individuality. To tie it all together and make it a real cohesive work of art, I think it was fun to work with and explore.

Shweta Sharma: My basic vision for the reinterpretation was to create a world that wasn’t defined by a single dominant skin or species. I wanted this world to be inclusive in a kind of deconstructed ecosystem, where common connotations change and everyone is allowed to dream and have fun. And it’s also very funny when I say that, because I felt like I was dreaming while doing that too. So there is a literal dream section; There are humans, there are demi-humans, animals and birds that exist and animals and birds that don’t exist. But I would love to see characters from my favorite movie and cartoon series, or in an unexpected but wonderful setting where anything is possible.