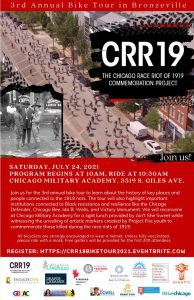 The unveiling of the first public art prototypes to mark the scene of the 1919 Chicago Race Riot murders took place in Chicago’s Bronzeville neighborhood in July.

A bicycle and cart tour of key sites linked to the history of the city’s worst incident of racial violence as well as the black community, and in support of the public art project, took place at the same time. About 350 people attended, including about 300 joined the two-hour bike tour.

The art project, the Chicago Race Riot of 1919 Commemoration Project (CRR19), was founded by Western Illinois University history professor Peter Cole and is co-directed by Cole and the executive director of the Chicago Center for Youth Violence Protection. , Franklin Cosey-Gay.

These historic markers, when completed, will mark the sites where the 38 people were killed in the riots that played a central role in the subsequent expansion of residential segregation that continues to define Chicago.

The first five markers will be placed in Bronzeville and one in the Loop near the Art Institute. These markers will be created by Firebird Community Arts, an art studio that uses art as a form of therapy for abused teens.

This is the third year of commemoration of the anniversary of the events of 1919, as well as for the bike tour, which teaches the history of key places and people linked to the riots, as well as institutions linked to the resistance and to black resilience.

Sean Leary is an author, director, artist, musician, producer and entrepreneur who has written professionally since his debut at the age of 11 in the pages of the Comics Buyers Guide. A graduate with honors from the University of Southern California’s master’s program, he has written more than 50 books, including best-selling books The Arimathean, Every Number is Lucky to Someone, and We Are All Characters.

Would you buy this painting by Hans Hofmann at Art Basel or a drawing by his pupil, Lee Krasner? We asked an expert to choose