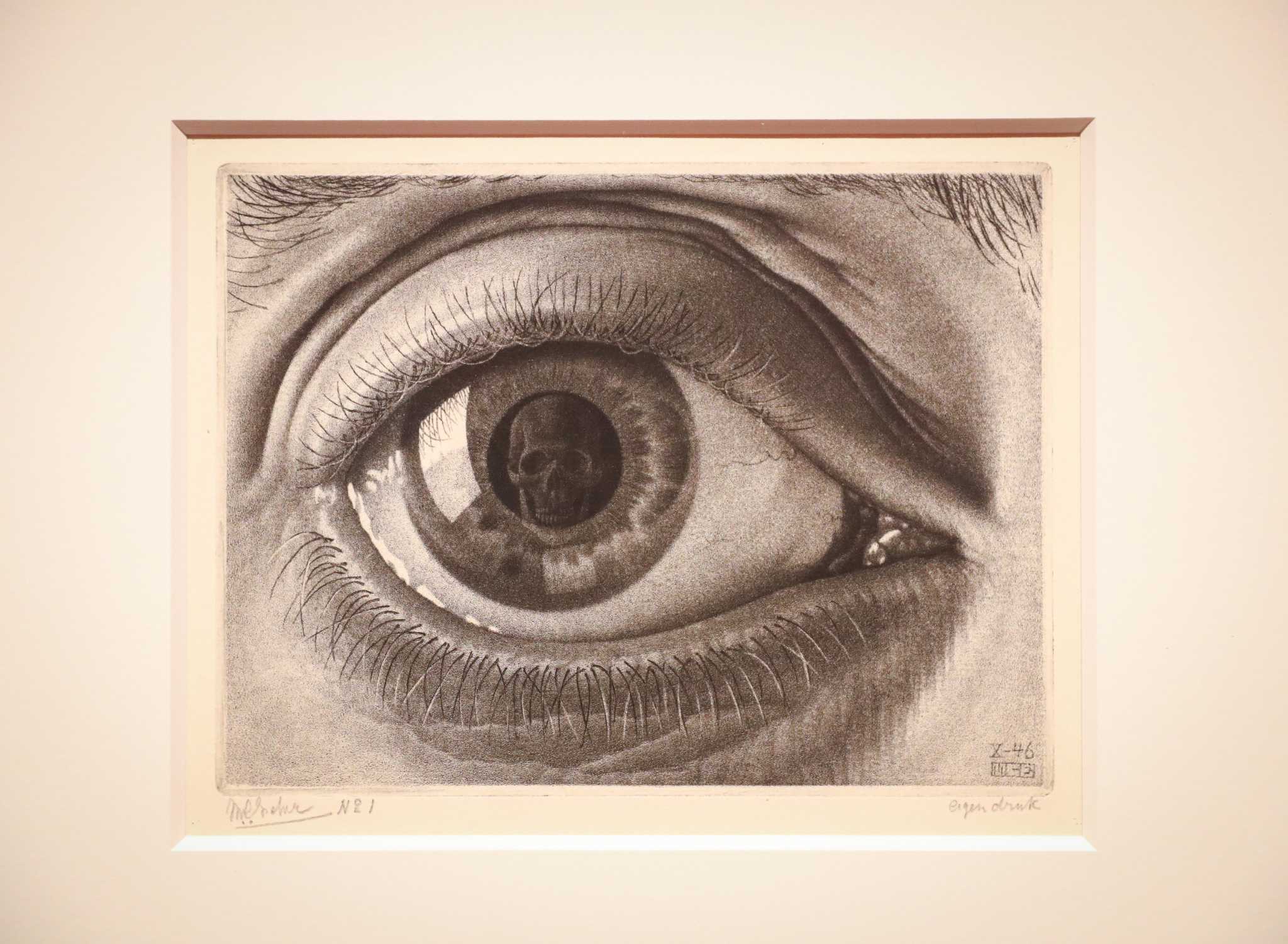 Maurits Cornelis Escher saw the world differently. The Dutch artist created a few dozen images which, due to his particular perspective, have endured. But many of these images – two hands sketching each other, impossible architectural constructions with perpetually flowing water, lizards and other creatures emerging from sketch to reality – didn’t really help canonize Escher. as a major artist of the 20th century. Instead, he became the da Vinci of the dorm – an artist whose work spread across posters, T-shirts, calendars.

Michael S. Sachs participates in the commodification of Escher – he wears a tie and a wristwatch bearing images of Escher – but he would like to see Escher treated with a mixture of the wonder that so many of us bring to work of Escher when we were younger, accompanied by the recognition of a meticulous theorist, craftsman and artist.

“People say, ‘He’s not an artist, he’s doing this fancy stuff,'” Sachs says. “He could draw as well as anyone. He decided to do this modern work. He chose it. And it exhibits consummate craftsmanship.

Befitting its subject, “Virtual Realities: The Art of MC Escher from the Michael S. Sachs Collection” is a stunning exhibition opening this weekend at the Museum of Fine Arts in Houston. About 475 pieces are exhibited, retracing the evolution of Escher through woodcuts, lithographs, sketches, linocuts, watercolors, mezzotints. Contrasting with Escher’s reputation for reproduction, these pieces explode in person.

When:Wednesday to Sunday until September 5

“It sheds a whole new light on Escher, seeing them in person, not just in a book, reproduction, or poster,” says Dena Woodall, curator, prints and drawings at MFAH. “That’s how many of us learned of Escher. But for me, it was a revelation.

The depth and precision of Escher’s lines are eye-catching here. The conceptual framework is better appreciated. Several of the pieces of wood he cut are on display, and they create conversation with artwork on the wall, illustrating the depth of work of an artist who thought multi-dimensionally.

Sachs acquired approximately 90% of Escher’s estate in 1980, nearly a decade after the artist’s death.

“I have friends who collect Eschers, who are serious and spend a lot of money,” he says. “They would come here and die for it.”

Sachs is eager to walk viewers through Escher’s work, though he stops at “Hand With Reflecting Globe.” The famous 1935 lithograph of Escher looking into a reflecting globe is one of the artist’s most famous images. Because Escher strove to be ambidextrous, viewing the piece makes it difficult to discern which hand is making the design and which is holding the globe when considering the printing process and the image.

“You are alone,” Sachs said.

But more often than not, Sachs identifies the elements that make Escher’s work distinctive. He finds three elements that can be identified in some of the artist’s best-known works: tessellation, or a tiling surface using multiple geometric shapes; metamorphosis, or the way his images undergo gradual transformations; and a play between two and three dimensions, as when a sketch of a lizard results in a more realistic lizard crawling off the page.

“Escher explained how the dragon realizes that it is on a piece of paper, in two dimensions,” explains Sachs. “And he doesn’t like it. It is a living figure in three dimensions. So he’s trying to prove here that he’s three-dimensional. It’s a perfect example of how he works between the two-dimensional and the three-dimensional.

Sachs is keen for people to understand the processes the artist undertook to create these works, both creatively and technically. “Virtual realities” accomplish both. Studies on graph paper show how Escher imagined and executed the domed exterior of the “Balcons”. But the pieces of wood and linoleum in Sachs’ collection are crucial to understanding the painstaking processes to arrive at his works.

Several tools come together to tell the story of the “stars”, in which Escher placed a pair of chameleons in a geometric figure. One version of the work features six colors, but only three blocks of wood which allowed Escher to execute the vision.

So many iconic images of Escher are included in the exhibit. But the real joy in “Virtual Realities” is seeing signature ideas and styles emerge from lore like the reptiles of his sketchbooks. Gary Tinterow, executive director of the MFAH, points to some early pieces that he says connect Escher’s work to a Dutch tradition that also informed Piet Mondrian. It cites Escher’s distinctive anamorphic perspective, providing strong but distorted viewpoints.

The exhibition follows Escher’s work from the Netherlands to Rome and Spain. As landscapes and architecture changed according to location, Escher’s fascination with presentation also evolved greatly.

With Escher, the temptation is to fall into the conceptual nature of his work: the impossible constructions and the way the patterns evolve in space. Tinterow points to the main dish in the show, a sprawling, densely tessellated “Metamorphosis” that begins with the titular word, evolves into a checkerboard pattern, then lizards, wasps, horses, birds, and buildings before transforming into a chessboard. The piece is several feet long and its matching wooden plaques are an impressive counterpart.

Yet the pervasive nature of Escher’s work has had the effect of softening his fame. Sachs hopes to inform about the resulting processes and work.

“If you take a watercolor (Marc) Chagall or a watercolor (Alexander) Calder, photograph it, print it on lithographic paper in an edition of 100, signed and numbered, it’s not the same thing”, Sachs said. “It’s not the same as when you have an artist take a block of wood and cut it out, and you print directly from it.”

Sachs says these works – whether carved from wood, metal or linoleum – “provide a direct connection to the artist. The artist worked on their surface. There is no camera or intermediate machine. My dad was a businessman, but a sophisticated businessman. He could never figure out why a piece of paper was worth more than $5. It’s because they’re directly related to the artist.

While “Virtual Realities” seeks to present a fuller etching of Escher, the exhibition still leans into the visceral response his works elicit. Knowing the process adds to the dread, but these are still visionary pieces capable of connecting with old and very young viewers. Although Woodall points out that Escher was not an outstanding student of mathematics, his work speaks to mathematicians. “They feel like he could conceptualize their theories,” she says. Scientists and naturalists are also fond of Escher, intrigued by their fields of study.

A small room has been fitted with a deceptive floor and ceiling to give the impression of standing inside a work by Escher. A dark light room presents a rainbow of colors at the end of the exhibition, showing how its concepts and images are so often co-opted.

“Virtual Realities” covers almost half a century of work since Escher’s life. His last piece was premiered in 1969, and he died three years later.

Some of the mosaic works are done in watercolor, beautiful designs that Escher kept in folders in a drawer for years. Sachs marvels at a tapestry, a mosaic mixture of demons and angels.

He lets the thought linger.

“Escher never sold a drawing or watercolors or constructed objects,” he says. “He kept them until the end of his life. What makes this collection and this exhibition unique are these drawings, these watercolors, these printing plates. They show the process. We know people are interested in his work. I hope the general public will also find the process interesting. To see his process.