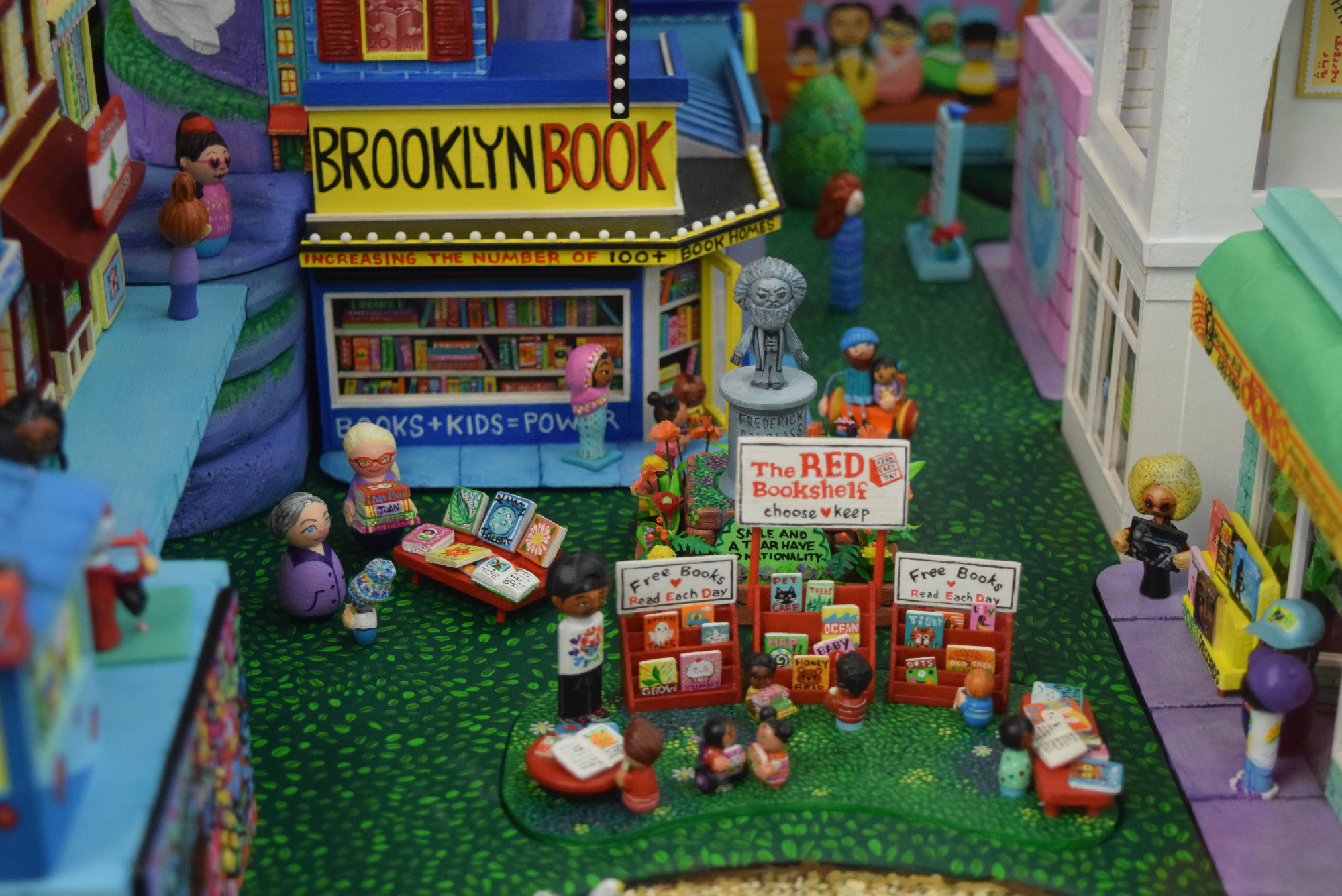 With replica buildings and tiny intricate decorations, it’s a clever and whimsical installation titled ‘The City of Dreams, People: Everyone’.

Wrapped in Plexiglas, it’s on display near the children’s section and includes depictions of familiar landmarks and a few more fantastical ones, as well as people from all walks of life and representations.

Vischer Ferry artist Jennifer Wojtowicz has spent the past two years carefully planning, sketching and painting the town, which went on display for the first time earlier this month. Wojtowicz, who holds a BFA from Alfred University, is the author of “The Boy Who Grew Flowers” and has taught artists with disabilities since 1996.

The inspiration for “The City of Dreams” came in part from his family and his fascination with building small towns and worlds out of toys.

“My son really [loved] building things and me too. I think playing with blocks with kids is one of the most fun things,” Wojtowicz said.

She created a set of building blocks for her son years ago, then years later she and her husband, artist Marcus Kwame Anderson, created a small town for their daughter and added people to the mixture. After Wojtowicz and Anderson were invited to an artist’s toy show, she had the idea to create a more elaborate town that went beyond their family.

“This town that I made for our daughter represents us and our family and if I had to do something to show off, I would want the little kids to come up and see themselves in it or something like their family. . . It just grew into that idea,” Wojtowicz said.

In early 2020, she secured an Artist Fellowship through Saratoga Arts for Materials and spent the pandemic bringing it to life.

Some of the buildings, such as the Stephen and Harriet Myers Residence and the Guru Supermarket, will be familiar to residents of the Capital Region.

The former is the first building she built and long before she did, she researched and toured the historic home, located on Livingston Ave. in Albany and was the headquarters of the Underground Railroad in the 1850s.

“When I started building it, [I knew] it must have been a little bigger than I thought,” Wojtowicz said. “It’s such an important building…I really want it to have presence and when people look at it…I want them to be able to see the details.

The building rests on the right corner of the display; each window is beautifully decorated and there is a stunning mural of the Myers on the back.

Wojtowicz also included replicas of The Harriet Tubman House in Auburn and Doris Records in Buffalo, an important part of the community since 1962, as well as Frederick Allen Lodge in Saratoga Springs and Riverview Orchards in Rexford.

Landmarks aren’t necessarily direct reflections of reality, as Wojtowicz plays with scale and design to bring out their spirit and emphasize why they matter to the communities around them. Riverview, for example, isn’t a real orchard but a stall and there’s a replica of owner Isabel Prescott selling apples and pies.

“I’ve always enjoyed playing with perspective and scale. . . because I just think it makes things more interesting and fun. So it gives you that sense of inner life, as opposed to things as they appear in reality,” Wojtowicz said.

The landscape is original and extraordinary, with an imposing purple structure towards the heart of the city. There are residents representing a myriad of cultures dotting each of the outcrops.

Many of the tiny wooden people who populate the city represent true counterparts, including people who have often been underrepresented in New York State history.

“We have such a diverse group of people here and I really wanted it to show,” Wojtowicz said.

This includes the likes of Niio Perkins, a Native American bead artist who does traditional and contemporary Iroquois beadwork, based in Akwesasne, NY

During the process, Wojtowicz sent progress photos and asked many people she represented for feedback.

“It was a good back and forth in the process. [I’m] trying to really capture the spirit of that person and their work and their importance to the community and to the state as a whole,” Wojtowicz said.

Next to the town, which is about two by three feet tall, is a selection of children’s books that relate to some of the buildings and people included in “The City of Dreams”. There is also a city map.

“I hope when people watch it, they see themselves or their family reflected in some way,” Wojtowicz said. “I wanted the kids to see yourself because when you see yourself reflected in the media. . . you feel wanted, seen and included. It was the experience I wanted the kids to have when they saw [this] and I also think it’s important for us to think about other people outside of ourselves.

“The City of Dreams” will be on view at the Central Library until the end of June and is worth returning to week after week to discover something new.

“It’s an invitation to see each other as friends and neighbors,” Wojtowicz said.

For anyone who can’t make it to the library, visit The City of Dreams YouTube channel for video tours and city progress reports.

More from The Daily Gazette: