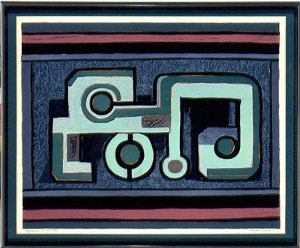 Artist Mykhailo Andriyenko-Nechytailo, better known in France as Michel Andreenko, was one of the great Ukrainian modernists who lived and worked in Paris between 1923 and 1982.

Indeed, independent researcher Vita Susak’s masterful monograph “Ukrainian artists in Paris 1900-1939” begins the second part of her work “The second wave: the Roaring Twenties” (the first wave being from 1900 to 1918) with a overview of four prominent artists of this period: Alexis Hryshchenko, Vasyl Khmeliuk, Mykola Hlushchenko and Michel Andreenko.

From June 18 to September 25 of this year, the Ukrainian Institute of Modern Art (UIMA) in Chicago is devoting its entire exhibition to the works of Andreenko. Entitled “Michel Andreenko: revisited”, it presents 50 paintings by the artist from the splendid collection of Drs. Alexandra and Andrew Ilkiw of Highland Park, Illinois.

Over the years, the Ilkiws have amassed some 97 paintings, gouaches, watercolors, and prints by Andreenko, in addition to more than 250 preparatory sketches and documents covering the artist’s creative life in Paris.

The UIMA exhibition is the second exhibition of Andreenko’s works – the first in 1979. This was the year I moved from Chicago to Paris, where I developed a keen interest in Parisian artists Ukrainians. So, during a visit to Chicago in June, I made it a point to visit UIMA, one of the flagship institutions of the Ukrainian village where I grew up in the 1950s and 1960s.

In Paris, I discovered Andreenko through people who knew him. Among them were collectors such as Volodymyr Popovych, his daughter Irena and musicologist Professor Aristid Virsta.

Andreenko was born in 1894 to a noble Ukrainian family and grew up in the southern city of Kherson – currently an area of ​​intense fighting between Russian and Ukrainian forces. His life’s journey took him from Kherson to St. Petersburg where he studied stage design and graduated from St. Petersburg State University.

Revolutionary events, however, precipitated his return to Kherson. After a year in Odessa, he illegally crossed the frozen Dnister into Romania and arrived in Kishinev (now Chisinau) in Moldova. From there he continued to Bucharest, Prague, and in 1923 arrived in Paris, where he lived and created until his death in 1982.

Andreenko painted in a variety of styles reflecting the period of his time – first in the Cubist-Constructivist manner, then, in the 1930s, Neo-Surrealist. His work is characterized by a precision of composition which harmonizes subtly with a gradation of colors.

In the 1940s Andreenko switched to neo-realism and painted a number of portraits and cityscapes which he called “disappearing Paris”. Finally, in 1958, the artist returned to a non-figurative abstract style. He also dabbled in collage using materials as diverse as sandpaper, textured paint and cork shavings – a mode in which he painted until his death in 1982.

Having lived in Paris in the 1980s, I was drawn to the charcoal and pencil drawings in the UIMA exhibit depicting Parisian street scenes. Among them, I found two little oil gems – La Foire des Rues” (1950) with the Eiffel Tower in the background, and the “Cathedral of Chartres”, a place I have visited many times. However, some of the charcoal drawings lacked dates and descriptions of the scenes depicted, making it difficult to track the artist’s development over the years.

In Paris, Andreenko has exhibited extensively in such prestigious venues as the Salon d’Automne and the Salon des Indépendants, as well as in numerous private galleries. One of them was Galerie 22, at 22 rue Bonaparte, where he had a solo exhibition on June 27, 1974. By a most unusual coincidence, the gallery was not far from Café Bonaparte at the north end from the mythical Place Saint Germain des Pres – a square that existentialists have dubbed the “navel of the world”. This factoid had special meaning for me because Café Bonaparte was a popular Sunday afternoon gathering place for Ukrainian artists, dissidents, intellectuals and scholars in the 1980s and 1990s.

Andreenko occupies a special place in the Ukrainian section of the avant-garde school of Paris. Curiously, he lived like a recluse, especially in his later years when many of his friends left. He seemed indifferent to fame and fortune, and like Hryshchenko and Khmeliuk, he never obtained French citizenship.

He remained Ukrainian and carefully guarded his Ukrainian identity. When he was approached by a Russian cultural official in Paris to ask him to be the spokesperson for Russian artists in Paris – aware of the tendency to subsume Ukrainian achievements and identity under a Russian cultural lens at the Soviet times – he refused and was told his place in history would disappear.

On the contrary, thanks to the efforts of collectors and art lovers like the Ilkiws, Susaks, Popovychs, Virstas, and others, it has not disappeared and its place in history is firmly assured. In this, the Ilkiws fulfilled the artist’s wish that his works be collected and exhibited by expatriates from the Ukrainian diaspora living in the West.

Even though I arrived in Paris in 1979, I never had the chance to meet the great artist. He was in poor health and received no visitors. My first encounter with his art was through Virsta, an avid collector of Ukrainian modernists and other painters. In fact, he persuaded me to buy one of Andreenko’s unnumbered lithographs (below) on display at UIMA.

Today his works can be found in museums in Vienna, London, Paris and Rome, as well as in private collections such as those of the Ilkiws in Chicago.

The UIMA exhibition “Michel Andreenko: Revisited” offers a rare opportunity to familiarize yourself with the creations of this famous Ukrainian modernist painter. The exhibition is open until September 25.

Jaroslaw Martyniuk is a former energy and environmental economist at the International Energy Agency (IEA))/Organization for Economic Cooperation and Developed Countries (OECD) in Paris. He is also a retired researcher associated with Radio Liberty in Munich and Washington D.C., and the author of “Monte Rosa: Memoir of an Accidental Spy.”

The opinions expressed are those of the author and not necessarily of Kyiv Post.