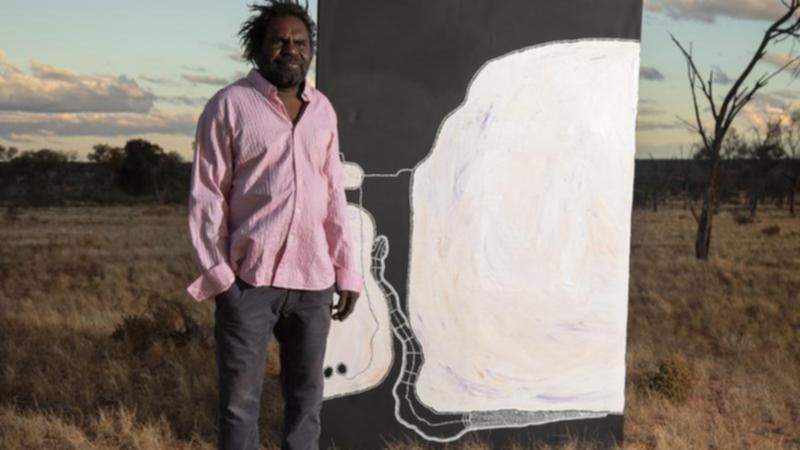 Rich explorations of the country and culture are expected to be unveiled, featuring a series of award-winning Indigenous artwork.

A panel of three judges sifted through nearly 250 entries to select 65 finalists whose works will be exhibited at the gallery from Saturday to February 6, and also online at www.natsiaa.com.au

The main prize winner, valued at $ 50,000, is Western Australian artist Timo Hogan for his acrylic on canvas, Lake Baker.

Two meters high and nearly three meters wide, the black, white and cream painting is a partial representation of the country of the artist’s father.

“He tells the story of Baker Lake with strength and pride as the steward of this place,” said Raymond.

“He’s a young artist, only 48 years old, but he paints with a confidence and skill beyond his years.”

Hogan said he was happy to win the award.

“It makes me feel strong inside. Painting is important for Anangu (indigenous people) to tell their stories.”

Hogan’s painting details the Tjukurpa, or the story of ancestral creation, “within the landscape and the people who made it,” Raymond explains.

“In this depiction of Wati Kutjara Tjukurpa (Line of Creation of Two Men), the men watch attentively the mighty Wanampi (water serpent) leave his house and walk along the edge of the lake,” she said.

Baker Lake is considered a sacred place and Hogan was careful of what he shared while painting.

“My father showed me the Tjukurpa when I was little,” he said. “It’s a great story but I can’t tell the whole story, miilmiilpa (very sacred), only the front part.”

Museum and art gallery director Marcus Schutenko said the Pitjantjatjara artist’s style and use of space is shaking up perceptions of Aboriginal art.

“Visitors to the exhibition (…) can see how this year’s winners are the barometer of high-caliber Aboriginal and Torres Strait Islander contemporary art,” he said.

Hogan shared the limelight with six other category winners, each receiving $ 5,000.

Raymond praised the “calm and thoughtful” acrylic on canvas.

“Bugai is an elderly and senior artist who rode the Canning Stock Route as a child,” said the curator.

“She has a deep familiarity with what she paints and there is a (feeling) of intuition in the way she painted this piece. The visible brush strokes are expressive and loose.”

The Bark Painting Award went to Dhambit Munungurr from Gunyunara in the Northern Territory for his acrylic on stringy bark, Bees at Gangan.

“Dhambit breaks new ground in bark painting with her palette and the extraordinary scale at which she paints,” Raymond said of the 243cm x 130cm artwork.

Following a car accident in the mid-2000s, the artist found herself in a wheelchair and lost the use of her right hand, so she was unable to grind the ocher pigments she used before. . So the elders of her local community’s art center in Yirrkala, in eastern Arnhem Land, allowed her to use acrylic paint instead.

“Since then, she has selected a restricted palette of blue, white and black, and there is something electric about the way she paints,” Raymond said.

The Works on Paper Prize was presented posthumously to the family of Mrs. M Wirrpanda of Yirrkala in the Northern Territory for a suite of 70 drawings of her family collecting seashells in the mangroves.

“This work has such a beautiful energy and I always notice something new about it,” Raymond said of the display of the designs in the form of a grid. “It’s a room you want to spend time with.”

The Wandjuk Marika 3D Memorial Award was shared by Hubert Pareroultja and Mervyn Rubuntja of Alice Springs for their collaborative three-panel watercolor, Through the Veil of Time, which depicts the MacDonnell Ranges.

“This painting is important because it is two elderly men who carry on the legacy of the Hermannsburg school, made famous by Albert Namatjira. What we see is an astonishing mix of their characteristic styles on screen printed mesh panels.”

Rubuntja, who is known for his bold lines and deep color saturation, painted the center panel, while Pareroultja, whose approach is more finely detailed and the palette more subdued, painted the two side panels.

Pedro Wonaeamirri from Milikapiti in the Tiwi Islands won the multimedia award with Jilarti (Brolga’s song), which he performed live for the judges while being decorated with an assortment of cultural ornaments.

“Pedro is fantastic for thinking about how to share Tiwi culture in innovative ways,” Raymond said. “Accompanying the display of the ornaments in the gallery is a video of this performance.”

The Emerging Artist Award went to Kyra Mancktelow of Logan in Queensland for her intricate work, Moongalba 11.

First, the artist handcrafted school uniforms for a boy and a girl using tarleton, a printing fabric traditionally used to wipe the color off an engraving plate.

“I chose this material because it represents (the) attempt to assimilate (take away) identity, culture, traditions,” Mancktelow said.

She then soaked the uniforms in ink, placed them on paper, and ran them through a printing press to create a spectral impression of the clothes on paper.

“Instead of using this material to remove the color, I put the color back into the uniforms.”

Mancktelow based its uniforms on those worn by native schoolchildren at the Myora Mission at Moongalba on Stradbroke Island, which ran from 1892 to 1943.

Thus, his work pays homage to all the young Aborigines and Torres Strait Islanders and their families who were forcibly displaced on missions during the 19th and 20th centuries.

Bloomed: A Review of Obama’s Portraits at the Art Institute of Chicago