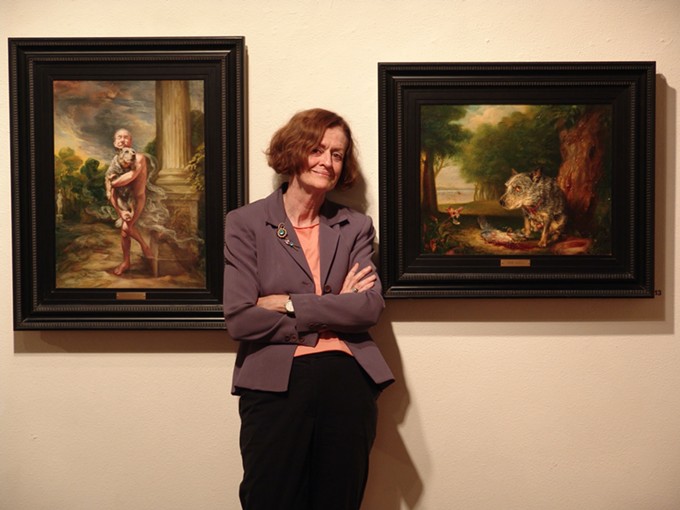 In 1981, Terry Etherton knew exactly what he wanted his new art gallery to be: a showcase for the burgeoning medium of photography. The photographs were finally becoming works of art. And he decided to show them exclusively.

Then in 1983 he saw the work of Bailey Doogan. She had made little monotypes of a kind he had never seen before. They were so stunning that he overruled his rule and invited her in.

“She was the first non-photographer we showed,” he recalls. “We’ve had many amazing shows from her since those early days. I think we’ve had about 12 shows with Peggy over the years.

Doogan was gaining a national reputation, particularly for his difficult paintings of women. Among her works of art was a provocative oil painting of a nude woman that stands in for the risen Christ of Catholicism, and she made a massive charcoal work that pays homage to an Irish activist who was murdered by the British during the Troubles. . The piece, “The Hard Place (For Mairead Farrell)”, is part of the permanent collection of the Brooklyn Museum.

Over the years, she has created challenging images of women’s aging bodies, often her own. In 2005, she told me: “I take care of the real body. Our bodies are the journals of our experience. Everything that happens to us is recorded there: the wrinkles, the scars, the way we hold ourselves. This specificity fascinates me. I think it’s beautiful.

Margaret Mary Bailey Doogan died on July 4 at the age of 80, leaving behind her daughter, Moira Doogan and her son-in-law from Oregon, a host of friends – artists and art lovers – and many fans , including me. As an art professor at the University of Arizona, she was known on campus as a wonderful teacher and generations of her students will remember her.

Doogan – “Peggy” to her friends – was a favorite in her hometown. In addition to her national exhibitions, she has shown her art throughout Tucson: at the Tucson Museum of Art, the University of Arizona Museum of Art, Dinnerware, Etherton Gallery, Louis Carlos Bernal Gallery at Pima Community College West, and Davis Dominguez Gallery.

I first wrote about her art for the Weekly in the early 1990s. I was struck by her oil painting, ‘Mea Corpa’, in which a glorious naked woman seems to dispense grace akin to that of Christ. In 1998, she presented a solo exhibition of startling charcoal figures at UAMA, so brilliant that I named it “the best of the year”. Twenty years later, I was still enthusiastic about his work. In 2018 the Bernal Gallery featured her along with four other prominent Tucson artists and I chose her work to write about – a semi-comic series of Peggy making faces in a mirror. What turned out to be her final exhibition was at the Davis Dominguez Gallery with two other female artists in 2020.

Unfortunately, the gallery was closed by the pandemic and the exhibition only lasted about a week.

When I first met Peggy we were devastated to find that we were both born and raised in Philadelphia, raised in devout Irish Catholic families and taught by nuns from grade one to high school. We even both took Latin. Peggy was happy that I understood the Catholic references in her art and I was happy to meet someone who had the same memories.

In 2005, Peggy scored a giant two-part retrospective at Etherton and the Tucson Museum of Art, both venues filled with her paintings in oils, pastels, charcoals and mixed media. To honor the occasion, I’ve written “A Life Lived”, a long cover story about Peggy’s work and life, including stories of her rowdy Irish parents and sexist co-workers in her early days in the education.

What a storyteller she was. She had a lot to say about everything under the sun. Fifteen years later, I share the room to make his words resonate: https://bit.ly/BaileyDoogan