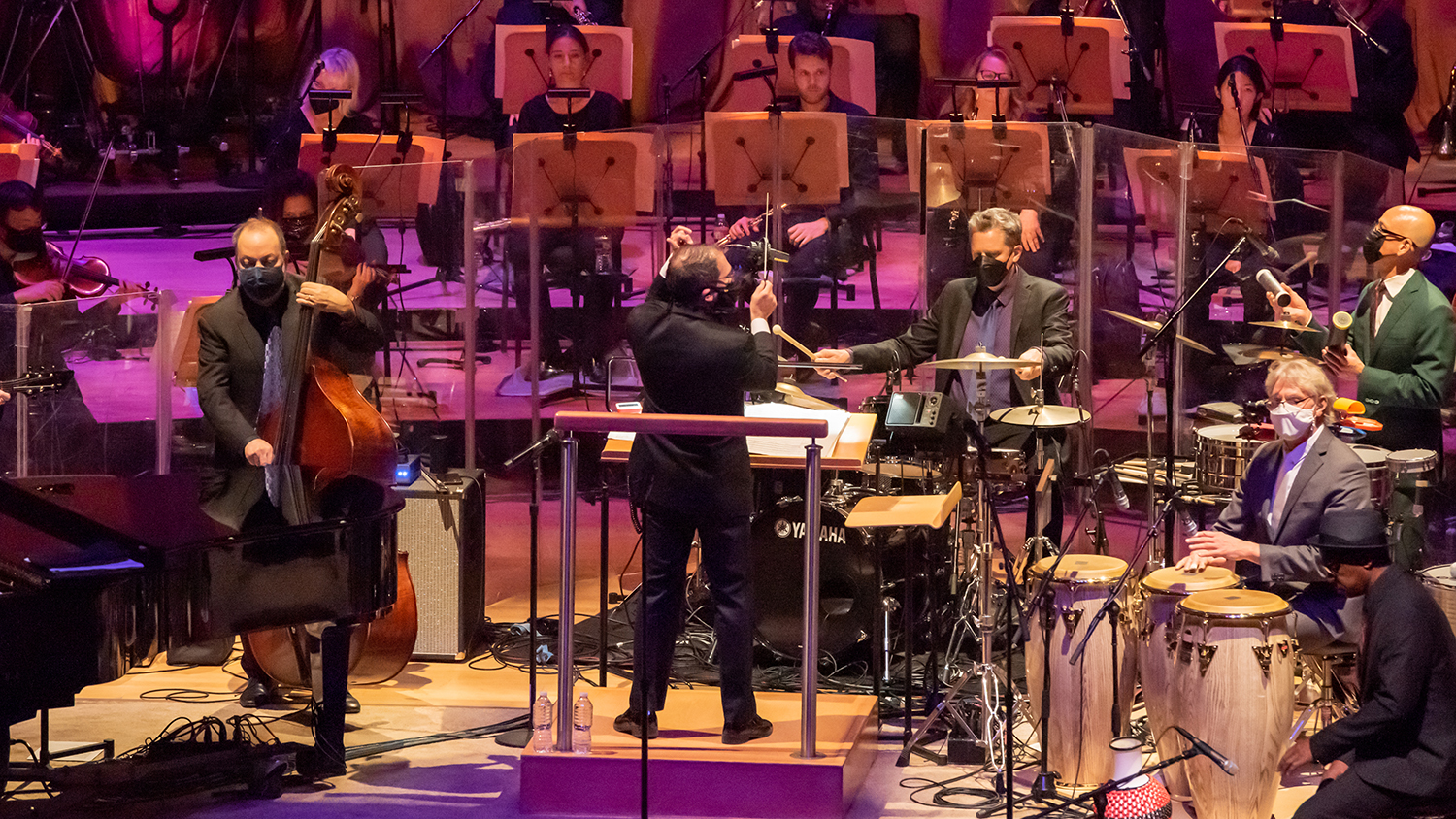 Last spring, local arts groups were optimistic about the 2021-22 season. The Philharmonic Society of Orange County, the Pacific Symphony, the South Coast Repertory and other major institutions anticipated a gradual return to normal programming. The Philharmonic Society, whose website announces its season with the bold words “together again”, has scheduled major groups such as the Russian National Orchestra and the London Symphony Orchestra for early 2022, banking on full venues for its performance. most expensive programming. The mood reflected a growing national consensus that falling infection rates showed COVID-19 was finally on the decline.

Then came summer and the rise of the Delta variant. By mid-July, it was becoming clear that we hadn’t seen the end of social distancing and other restrictions on public life. Arts groups have been forced to rethink their programming plans, often after pulling the trigger on contracts and commitments.

We asked several artistic leaders in Orange County how they are dealing with the latest complications from COVID. They also spoke about the long-term effects of a pandemic that stubbornly refuses to go away.

The current approach combines measured optimism and caution, a step back from the outright enthusiasm that prevailed a few months ago. But audiences seem willing to endure strict protocols to relive the events live, and OC’s arts institutions are working hard to deliver that experience.

â€œ(Recently) we hosted our first indoor performances with a rescheduled Pops concert scheduled to take place in March 2020,â€ said John Forsyte, President of Pacific Symphony. â€œIt was very well received and moving. There was electricity when the orchestra took the stage and the lights dimmed. People are hungry for live experiences, and while there was some trepidation about going back inside, we enjoyed a full house.

Last month, as part of a campaign to reassure patrons that their safety would not be compromised, OC’s major arts groups have agreed to a strict set of security measures designed to prevent the spread of COVID.

“In August, we updated our security procedures and issued new vaccination guidelines requiring all ticket holders to present proof of vaccination and a mandatory mask for all shows,” said Casey Reitz, President of the Segerstrom Center for the Arts, which organizes events for the Pacific. Symphony, the Philharmonic Orchestra and other local arts organizations in addition to programming its own seasons for classical music, dance and other artistic disciplines. â€œAs we prepared to fully reopen our indoor venues, we wanted our audiences, artists, staff and team to know that providing a safe environment is our top priority.â€

The new requirements are strict. “Everyone attending indoor performances on one of our campuses must prove that they have been fully vaccinated against COVID-19 with a vaccine authorized by the World Health Organization or the Food and Drug Administration,” said Reitz. â€œThe last dose of the vaccine must have been administered at least 14 days before entry. All people attending indoor performances should also wear appropriate face coverings per current CDC guidelines. Unvaccinated people must provide proof of a negative COVID-19 PCR test taken within 72 hours of entering the theater, Reitz said. “We also strongly encourage guests to wear a mask when attending an outdoor performance.”

At this point, no OC performing arts organization has indicated it will revert to social distancing and setting up six feet of distance between audience members at shows. â€œWe are selling our concerts at full capacity based on California State guidelines,“Said Forsyte.

The persistent pandemic has affected more than just protocols for customers. Fundraising was also impacted. The continued generosity of long-term donors is being tested, and attracting new contributions has become an even greater challenge.

â€œWithout a doubt, the pandemic has affected the personal finances of many people,â€ said Paula Tomei, managing director of South Coast Repertory, Orange County’s largest theater company. “But fortunately our board and other key supporters have remained steadfast and active in their giving, as have most of our existing donor base.” But attracting new donors has been difficult, Tomei said. â€œOnce we are able to come together for performances again, the conditions for cultivating new donors will improve dramatically. “

On the other hand, the fundraising climate has encouraged an additional wave of generosity among many seasoned donors, who recognize the gravity of the current crisis.

â€œOur fundraising has definitely changed, but ultimately for the better,â€ said Tommy Phillips, President and Artistic Director of the Philharmonic Society. â€œAfter what appeared to be a very long period of ‘shelter in place’ which also included contributions to the shelter in many cases, our generous donor base, as well as new donors, continued to provide support. . In fact, many of our supporters have increased their financial support over the past 17 months. “

As Tomei hinted, fundraising is often made easier by bringing potential donors to performances. The lack of live concerts over the past 18 months has deterred donors, Phillips acknowledged. But creative alternatives have been discovered.

â€œConnecting with our supporters was more difficult in some ways as the concert halls get darker,â€ Phillips said. â€œBut we focused on creating opportunities for participation through creative and high-quality virtual programming, private events and in-person events that are safe and socially distant once the mandates are relaxed. Rather than cut back the lineup and overcome the pandemic, we decided to keep the music going, and supporters enthusiastically participated in every opportunity we gave to connect with the music and with each other, which helped to strengthen their link with the Philharmonic Society. “

For the most part, major supporters realized it was time to step up, Forsyte said. â€œMany symphony supporters have continued to give generously throughout the pandemic and have done so throughout our fiscal year ended June 30. The symphonic galaâ€¦ was our most successful with a net amount of over $ 2 million. Donors shared that they understand the challenges musicians face and appreciate the large amount of free digital content that is being generated.

Think about how the world will change

Art leaders agreed that the post-pandemic world will be fundamentally different, although they disagree on what it would look like. Tomei predicted that his overall theater attendance could drop somewhat, but long-time subscribers would remain loyal. Others foresee changes in programming approaches and a more intimate relationship between artists and audiences.

â€œWe all understand that COVID has defined a ‘new normal’, but for the performing arts it also meant a new or renewed appreciation of music. I think the concert experience will be much more user-friendly – that is. i.e. shorter performances in general, a greater appreciation for the concert attendees and a much warmer relationship between artist and patron as (they have) a renewed sense of appreciation for one another. other . “

Forsyte stressed the need for new technologies and approaches. â€œWe envision many aspects of concert life that have been so successful for many generations to come, but there is also a need for continued experimentation, including performing in new and unusual venues (and) offering the possibility to use live camera feeds to see up-close-ups of musicians, whether on a portable device or a screen, dismantling some of the formality of attending concerts.

Forsyte even imagines serving people who are not ready to return to the concert hall. â€œLive broadcasts will be offered to ticket buyers who feel uncomfortable attending in person. “

One positive outcome of the pandemic is that arts organizations have found new audiences.

â€œThrough our virtual programming, our demographics have broadened to include a younger and more diverse audience, and we hope these customers will also continue their musical journey with us in person,â€ said Phillips.

Reitz said, â€œWhen we were able to safely offer outdoor performances again, we offered various community engagement programs to bring guests back to the center. These various programs and performances have attracted so many new patrons from the community.

Art leaders agreed that it was important not to lose an existing loyal following as they sought to develop new ones. â€œIt is inevitable that our audience will evolve with the changes we see in the demographics of counties and the generational shift in artistic preferences,â€ said Forsyte. “However, it also takes into consideration the changing tastes of new generations of listeners without leaving behind those who enjoy the traditions of concert life.”

Paul Hodgins is the founding editor-in-chief of Arts & Culture at Voice of OC. He can be contacted at [email protected]