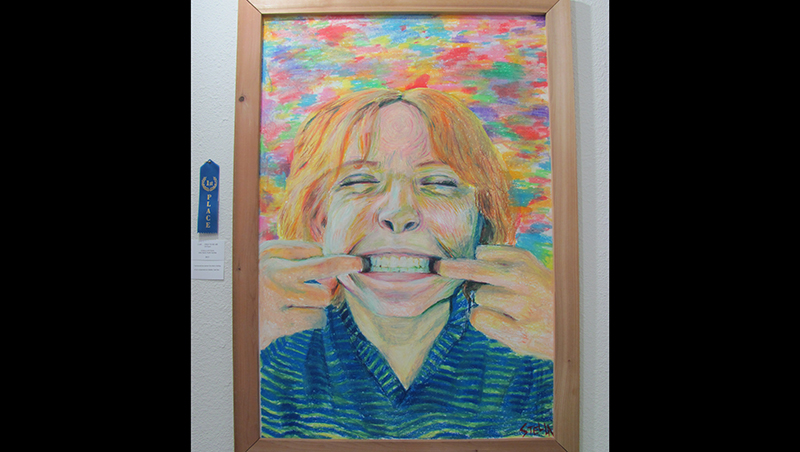 Artist Kitty Hawk Stella Nettles won 27th honorsand The annual exhibition of artist self-portraits is now on display at Glenn Eure’s Ghost Fleet Gallery in Nags Head. Receiving first place was her oil pastel titled I AM . . . FREE TO BE ME.

Exhibit judges Steve and Carol Kirton of Pennsylvania said of Nettles’ work, “We were impressed with the range of emotions conveyed and the artist’s approach to the theme of self-portrait of 2022.” The theme was I AM ___________ with an invitation for artists to fill in the blank with their creations.

The judges also selected two artists from North Carolina for the Excellence Awards. The first went to Shannon Anderson of Edenton for an innovative wooden sculpture titled I AM, BUT YOUR TEARS . . . . The second was awarded to Dawn Angela Dickson Van Ness of Manteo for a thoughtful portrayal of the artist in an acrylic on canvas she titled I AM HER.

Get the latest headlines sent to you

In addition, five honorable mention ribbons were awarded: one for outstanding black and white photography I AM GUARD by Edenton artist Bobbie Campbell; another to Carleigh Flynn of Greenville for a powerful lithograph I AM WHAT OTHERS MAKE ME; the third to artist Manteo Jasmin Miller for a beautifully executed oil SELF-PORTRAIT; the fourth to fellow Greenville artist MJ Orlando for an expressive serigraph titled BULLY. And another honorable mention ribbon was awarded to artist Kitty Hawk Shirley Ruff, who invited the viewer into the artist’s studio with her detailed and colorful oil on canvas painting. I AM A GARAGE ARTIST WITH A STUDIO DOG (must see in the show).

The work of 55 visual artists from North Carolina as well as California, Massachusetts, Michigan, Virginia, Wisconsin and Bainbridge Island, Washington is featured in the exhibit, which will be on display through May 5 during hours gallery opening hours Tuesday to Saturday from 10 a.m. to 4 a.m. pm

In 2022, literary artists were also invited to participate in the self-portrait event. Thirteen represented themselves in the written word. The highest literary honor went to Kathy Cawthon of Manteo for a poem I AM THE CROWN. Honorable mention went to Suzanne Scott Constantine of Point Harbor for a prose piece STILL TO LEARN. Jhe literary judge was Jane Lindley, a writer and photographer who recently moved to the Outer Banks. Literary works are available for reading when visiting the gallery.

We must do better in end-of-life care: Mary Foti