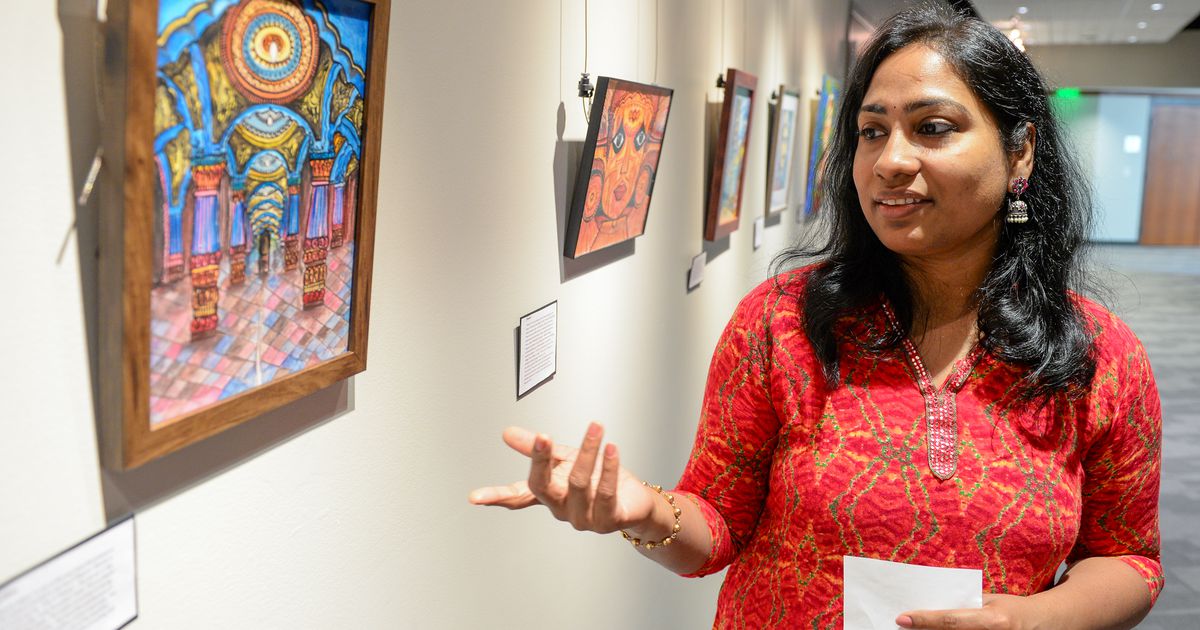 Indian-born artist Durga Ekambaram talks about “rediscovering herself” in Utah.

“When I moved to Utah, I wanted to do something more in life,” said Ekambaram, who has bounced between the United States and his native India with his family for the past two years. decades – living for five years in Utah. .

The spark that ignited her artistic motivation was attending a chalk art festival in southern Jordan in 2019. The festival reminded her of an art form she practiced back home in Chennai. , Tamil Nadu, India: The art of kolam, a form of decorative art that uses geometric patterns. .

“It’s a model made outside every house in the morning,” Ekambaram said, noting that she learned the techniques from her mother, a professional artist who still lives in India. “I would go out in the morning, take some rice flour and do a little drawing. After a few hours you will see birds and insects feeding on this rice flour, so the concept behind this is to start your day with charity.

She started drawing with chalk at this festival in southern Jordan and found that it wasn’t as easy as she thought. “Chalk is not like paint,” she said. “You can’t get those nice looks because the pavement is really rough.”

Still, she learned the techniques as she went that day and won second prize out of the 40 or 50 people who entered.

Over the next three years, Ekambaram branched out into watercolor, clay, acrylic paint, oil paint, and reverse glass. All of this can be seen in the 19 works in his exhibition, “Enchanting India,” on display through July 20 at the Utah Cultural Celebration Center, 1355 W. 3100 South, West Valley City.

Ekambaram’s work also uses several Indian art techniques: Madhubani-style art, a type of folk art that uses line drawings, bright colors and contrasting patterns; Kalamkari, which is a hand-painted or block-printed cotton textile; and Lippan art, a type of wall painting that uses a combination of local materials, such as mirrors, clay, and camel dung.

One piece, “Prismatic Feathers”, depicts a peacock – India’s national bird – using an Indian paper art technique. “It’s very complex and difficult, but the end product gives you so much of your own happiness,” she said.

The exhibit pays homage to India’s culture and history in a holistic way — “It’s a vast nation, north, west, south and east,” a- she declared. “There is so much culture and art to learn, but somehow people associate India with spices, the Taj Mahal and all those things.”

Not that Ekambaram thinks there’s anything wrong with these well-known symbols of India. Indeed, she shows peacocks and elephants in her work, as well as the most recognizable Hindu deity, Ganesha. And there’s no shortage of bright colors usually associated with India.

She also has a personal connection with each of her works. A small sculpture depicted a Bharatnatayam dancer, performing a traditional dance form which she began learning when she was 7 years old. Another piece shows a vein, a stringed musical instrument which she played for eight years. And she did a pointillist portrait of the Tamil poet and activist Subramania Bharatiyarwhose work she studied at school.

Michael Christensen, UCCC’s director of visual arts, said Ekambaram’s exhibit in West Valley City is “representative of the residents” of Utah’s second-largest city. In 2018, the city was dubbed the first “minority majority” city in the state.

“What we do in many ways is inspire people to have an artistic experience while you’re here for something else,” he said. “Because it’s a cultural center, it’s a place where you want to have fun.”

Ekambaram said she hopes when people look at her work it will make them instantly happy, “just with the vibrancy and the use of color.” She’s learned not to get too attached to one of her works, and if it sells, she donates the commission to charity.

“Art accompanies me since I know [anything]she said, remembering her childhood home, where her mother’s brushes were everywhere. “I never realized it could be something so rewarding and to be truly proud of, like any other profession.”

The artist’s question… answered in fiber

Works by Kara Walker, Alice Neel and Sophie Ryder are in the Ahlers & Ogletree auction from June 9-11