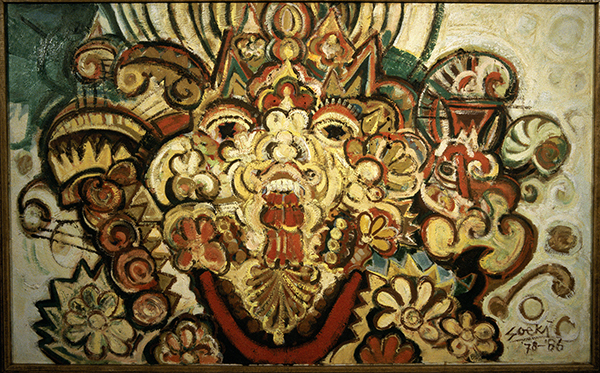 Arthur Ross Gallery Exhibition: No Ocean Between Us: The Art of Asian Diasporas in Latin America and the Caribbean, 1945–Present

The Arthur Ross Gallery is pleased to announce No Ocean Between Us: The Art of Asian Diasporas in Latin America and the Caribbean, 1945 to Today, an exhibition that explores Asian migration to Latin America and the Caribbean and its influence on modern and contemporary art. No ocean between us is on view at the Arthur Ross Gallery from January 29 to May 23, 2022.

Inspired by the permanent collection of the AMA|Art Museum of the Americas of the Organization of American States, No Ocean Between Us: The Art of Asian Diasporas in Latin America and the Caribbean, 1945 to Today presents more than 30 important works by Latin American and Caribbean artists of Asian descent. The exhibition shows how this work emerged from transversal global dialogues between artists, their Asian cultural heritages, their Latin American or Caribbean identities, and their interaction with major artistic movements.

The exhibition includes paintings, works on paper, sculptures, videos and multimedia works by artists from Brazil, Cuba, Guyana, Jamaica, Mexico, Panama, Peru, Suriname and of Trinidad and Tobago. Featuring the work of influential artists such as Wifredo Lam, Manabu Mabe and Tomie Ohtake, among many others, No ocean between us demonstrates their vital but often overlooked contributions to the creative landscape.

Asian migration to the Americas resulted from labor shortages resulting from the abolition of the slave trade by the United Kingdom in 1807. British, Spanish and Dutch colonizers in the Caribbean, as well as newly independent countries such as Peru and Brazil, brought in workers from India, China, Indonesia and Japan to meet growing labor demand. While most of these workers eventually returned to their homelands, many settled in their new homeland, setting in motion the rich and complex stories of assimilation and exchange presented in this singular exhibition.

No ocean between us was made possible in part by a major grant from the National Endowment for the Humanities: Exploring the Human Endeavour. The exhibition was kindly supported by the E. Rhodes and Leona B. Carpenter Foundation.

Adriana Ospina is the director of the OAS AMA|Art Museum of the Americas. She started at the AMA in 2008 as Head of Educational Program and in 2014 was appointed permanent curator of the collection. She also oversees the AMA’s Modern and Contemporary Art Archive of the Americas. Ms. Ospina is a Colombian art historian and holds a master’s degree in art history from George Mason University.

No Ocean Between Us: The Art of Asian Diasporas in Latin America and the Caribbean, 1945 to Today was developed and organized for touring by International Arts & Artists, Washington, DC, in conjunction with the Art Museum of the Americas, Organization of American States, Washington, DC. International Arts & Artists is a non-profit arts service organization dedicated to increasing cross-cultural understanding and exposure to the arts internationally, through exhibitions, programs and services to artists, arts institutions and to the public.