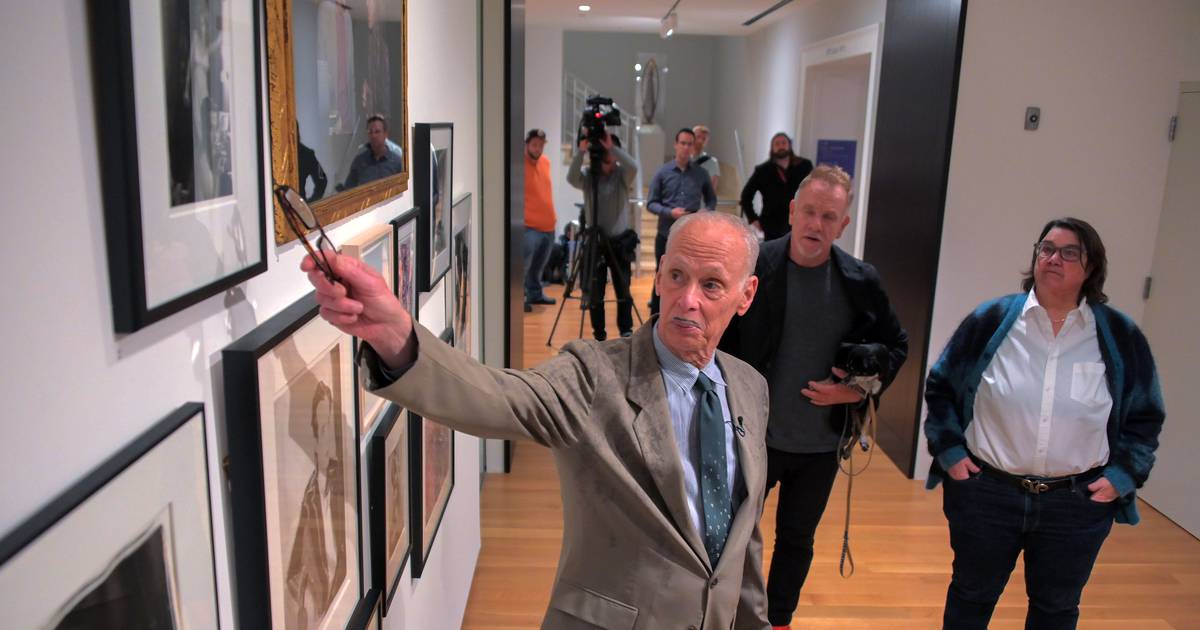 Five letters that spell the word “CRAZY” are framed and displayed in a new exhibit at the Baltimore Museum of Art. They’ve been scribbled by hand on an old piece of brown cardboard, and the letters swoop down.

The artist? John Waters, Sr., the late father of the cult Baltimore filmmaker.

The drawing was intended by the father to poke fun at his son’s early purchase of a 1978 doodle drawing by artist Cy Twombly, the former laughingstock of the art world whose most important pieces are are now selling for tens of millions of dollars.

“My dad was the type of contemporary art mad person,” BMA trustee Waters said during a Tuesday press preview of “Coming Attractions: the John Waters Collection,” an exhibition of 83 works by the filmmaker’s personal collection which opens on Sunday. Guest curators Catherine Opie and Jack Pierson selected highlights from the collection of 375 works, which Waters bequeathed to his hometown museum in 2020.

“My dad wrote ‘CRAZY’ on an old piece of cardboard, which he thought I was for buying it,” Waters Jr. recalled. “And he started going, ‘Did you buy THAT? They saw you coming, boy.

On a wall of the adjoining gallery are hung “Five Greek Poets and a Philosopher”, the seven lithographs by Twombly which so enraged the filmmaker’s father. When viewers look from drawing to drawing, it may not be immediately obvious which artwork is worth the big bucks and which is the smart copy.

“It’s absolutely not my dad’s normal handwriting,” Waters said. “He was trying to imitate Cy Twombly. But what he didn’t realize was that subconsciously he understood the artwork, because his drawing looks exactly like Cy did.

The paintings, prints and photographs on display until April 16, 2023 include major artists such as Twombly, Diane Arbus, Richard Serra, Cindy Sherman and two Andy Warhol announcements, in addition to works by less famous creators who have nevertheless captured Waters’ imagination. . This latter group includes a memorable finger painting from circa 1955 by Betsy the chimpanzee, a former resident of the Maryland Zoo.

“Betsy was a very famous chimpanzee who toured the world,” said Waters, who included a chapter on primate art in her 2019 book, “Mr. Know-it-All: The Tarnished Wisdom of an elder of filth.

“She appeared on national television. Betsy was carrying a suitcase and had a small hat.

When Waters’ works are not displayed in a public gallery, they are exhibited at the filmmaker’s three homes in Baltimore, New York, and San Francisco.

“John is the rare collector who hangs up every piece of art he owns,” said Pierson. “Most people who collect art have storage units. But John doesn’t have a room that doesn’t hang on the wall.

Considered as a whole, the works of “Coming Attractions” constitute a kind of visual biography. They not only reflect the tastes of the 76-year-old artist with the pencil mustache, but also the questions he asks, his often self-deprecating sense of humor and some of the places and people who matter to him.

Waters sometimes jokes that he resides “in a commune”. He calls the pieces in his collection his “roommates” because, he says, “I live with them and look at them every day.”

Some of the filmmaker’s more eccentric housemates include a drawing of two rectangular Ls stacked on top of each other by Serra, an artist best known for his monumental metal sculptures. At the bottom of the design, Serra wrote, “Happy Birthday John 1996.”

“It’s supposed to be two of his sculptures engaged in sexual congress,” Waters said. “Richard Serra is not known for his sense of humor. But I love Richard, and it was a really great gift.

A 1969 card in which Warhol advertises an upcoming portfolio of his iconic Campbell’s Soup Can prints. The can of soup pictured in the ad — cheddar cheese — seems a particularly fitting selection by the irreverent filmmaker. And according to the label, it works “great as a sauce too!”

Several works like to play tricks on their viewers. For example, a toilet paper roll sculpture by George Stoll takes pride of place in Waters’ New York apartment. The filmmaker had to get permission from his condo association to install the mount directly into his wall.

“So the great[intendent] came over,” Waters said, “and he puts a roll of toilet paper in the living room. The toilet paper is green chiffon and it’s puddled on the floor. I said, ‘This is going to be art.’ He looked at me like, ‘Oh great. What’s up with this pervert?

Plan your weekend with our picks for the best events, restaurant and movie reviews, TV shows and more. Delivered every Thursday.

Another tenant is “Female Impersonators Backstage”, a 1962 photograph by Arbus, specializing in empathetic portraits of people on the margins of society. In the background of the photo, an impersonator frolics in front of the camera in a nightgown and a curly wig. In the foreground, a shirtless young man looks over his shoulder at the camera while holding a tube of lipstick.

Waters said Grueber “ran away from his home in Baltimore to join the Jewel Box Revue,” a famous New York-based touring company made up of female impersonators.

“This photo was taken before I met him,” Waters said. “Howard always told me, ‘Diane just came backstage one day.’ They didn’t know who she was.

“Looking at Trash”, a 1985 photograph by Peter Hujar is also resident.

“You know, that’s what I’ve built my career on,” Waters said. “That’s why I bought my house. That’s what I bought this art with: the profits from the trash.

“This pile of trash hangs in my living room, the most formal room in my house. Trash can be beautiful. It can be elegant. That’s what this photograph says.

‘Don’t Look Back’: Art Dealer and Collector JP Loup Explains How He…