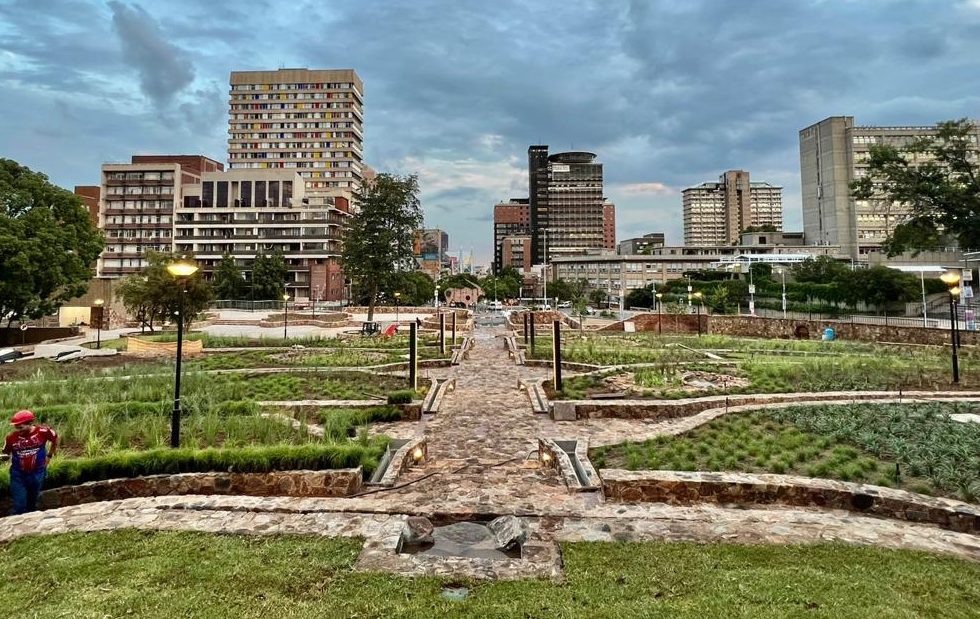 Opposite Wits University on the Braamfontein ridge where the legendary SA Breweries building stands, the new park – designed by architect Edmund Batley – is a gateway from the northern suburbs to the city centre, and where Mandela Bridge, the Diamond Building and the Eland Sculpture are orientation points. The entrance to Liberty’s offices has become a large porte-cochere and landing stage.

Still unnamed, the an area of ​​about 4 hectares promotes visual and physical connection to its urban context while simultaneously offering an area to escape the craziness of Joburg city life, reconnect with nature, engage in artwork, take a meditative meander, take off your shoes for a foot massage on a reflexology surface, land on a mound of earth or wander through a forest of Highveld trees.

The concept, which evolved over several years, was loosely referred to as the “Beacon Project”, as in “a silver lining” by the team of experts involved.

Unlike many others in his profession, Batley does not seem to be framed by any particular architectural typology. “We’ve never built anything we didn’t want to build and we never have a preconceived idea of ​​what our projects will look like when we begin our design process; they evolve from a series of checks and balances of what the end product needs to become,” he says.

He approached professionals who knew the city, understood what would work, and had relevant experience to help him realize the vision of an urban park: James Delaney, who reinvented The Wilds; the dean of indigenous gardening, Patrick Watson; lighting designer Paul Pamboukian; the artistic facilitation company Moja Nation; sustainability consultant and co-founder of PaperThinkLAB, Thulani Kuzwayo; as well as water play expert Pawel Gradowski.

“Every construction or architectural process is massively collaborative,” says Batley. “What happened on ‘beacon’ however was highly unusual as Covid contributed significantly to the result.”

James Delaney brought important insights from his experience to The Wilds on how to reclaim the parking lot and turn it into a place of healing, wellness and reconnection. In fact, “well-being” has become the theme of the park.

A vast 6m mosaic compass at the park will be one of the first things visitors will see. The work was designed by artist and community activist Andrew Lindsay and completed by his team at Spaza Gallery following his sudden passing in October 2021.

“This it took a while to figure out the scope of the work after Drew died,” says Spaza team leader Dionne McDonald. “We are working with his original design but I don’t have his color reference. He always worked in black and white and we worked in color as we went, but because he is part of us, he formed us all, it is impossible that he is not present in the work that we do . His voice is in our ears and sometimes I’ll even say to the team: Drew is so proud of you for this track, because I can see it’s something he would like.

Speaking about the project, Lindsay said working on the design made her think about how little attention we give to nature and where and how we walk. He wanted people to discover elements of the design, like images of insects, hidden in the mosaic, adding: “It’s also about teaching people to be aware of their surroundings.

At least six other works by better-known and emerging artists feature in the park – works by Nkhensani Rihlampfu, Zanele Montle, Grace Mokalapa, Pat Mautloa, Hannelie Coezee and James Delaney. “The artists came up with an idea for each place we designated,” says Batley.

MojaNation creative visual artist Farai Mafurirano says the goal was to enhance a sense of well-being by engaging with artwork on a spiritual, emotional, and intellectual level.

Additionally, Kuzwayo explains that a “Net Zero” tool was used to calculate whether developments at the site are positive for the ecology. This is not about repairing previous ecological damage, but about taking steps to improve the site, for example by planting more native plants and favoring permeable surfaces for landscaping.

Kuzwayo’s team inspected the site and recommended the removal of some exotic species as weeds. “The eucalyptus has been conserved because it is around 60 years old,” he explains, adding: “The ecological angle is not limited to plant species and nature. The park addresses a social dimension that the city desperately needs and contributes to the idea of ​​rewilding the city or bringing more nature into the city.

In discussions with Batley and the design team, Kuzwayo promoted a biophilic (a design approach that focuses on enhancing our “connectivity with the natural environment”). Landscaper Patrick Watson, known for his native gardens, selected plants based on his experience of the 30-acre Hollard Arcadia campus garden in Parktown, which he designed. He explains: “You let things happen. I always argue with the engineers. They say: I will put a column here. I say: I will put a tree here which will be sown at the bottom of the hill.

With his son, Jean-Paul Watson, and Abram Mokoti, Watson takes care of the entire plantation while James Delaney selects the medicinal plants. “The concept is grasslands, so it’s this surreal thing where you have wilderness in an urban setting. It is spiritual. It’s the veldt in the center of Johannesburg and it’s all about contrast, there are no hedges and things like that… and there are stone walls so you have a sense of country and l history, which is quite unusual for the city.

About 80% of the plants will be native to the Highveld and the rest will be exotic plants from around the world. “To just use wild in Braamfontein would be a bit too drastic,” he says. The part of the garden that is natural to Braamfontein will bring the butterflies back and restore it to what it was. “It’s like bringing artistic wildness into an urban setting and I think it’s quite enjoyable. They have lots of art and it will work as a sculpture park. Grasses will include native and ornamental varieties. “I think it will be a nice low point, especially since it’s quite masculine with hard walls and buildings.”

To the rear, bordering the Helpmekaar school, the property rises to the ridge and descends on the other side. “We expose rocks that are of geological interest,” says Watson. “These are welded shales that are part of the Witwatersrand system. The rocks on the Helpmekaar side go into the Indian Ocean and those on the other side go into the Atlantic. I think it’s exactly on the watershed.

That’s not all: the Yellowwood trees planted in the Brasseries garden 60 years ago are still there, and now others are being added. Wild grasses and 120 stink trees are being planted, and nine additional wild fig trees have been planted at the front of the building.

The original idea was to design a new porte-cochere and make the historic SAB building accessible to Wits students as part of an entrepreneurial ideas initiative. “From Patrick’s native plants, to our spine and winding walkways, to James’ ‘dirt mound’ and stepping stones, to Pawel’s tranquil water features and Paul’s experiential lighting, we’ve been at length discussed things. It’s been a really, really good team collaboration experience,” says Batley.

“How do you make something relevant to people who live in the city and also attract people who live further out in the suburbs? You have to make a green space not only beautiful and attractive, but also relevant and engaging so that it draws people in and keeps them coming back again and again,” says Delaney.

He adds: “We worked on the theme of healing so that it’s not just a beautiful landscape to walk through and a nice place to go for a picnic, but there will be a lot more depth to the story. Healing is about how plants and the landscape can also help the body and mind…it’s about the smells, textures and even the medicinal qualities of many plants; it’s about meditation spaces, and it’s about going to a place where you can relax. These are all aspects of holistic healing.

He believes the park has the potential to attract thousands of people and its strategic location will also appeal to tourists. “It’s on top of a koppie, a natural viewpoint, part of the ridges of the Witwatersrand, which are part of the gold reef on which the town is built.”

He also hopes Braamfontein Park will be a safe space for everyone to enjoy: “We are taking a fairly gradual approach. There will be no walls around it, it will stay open late into the night and be well lit, and there will be security, cameras and visible security, but it is a low key approach.

Indeed, evocative and theatrical nuanced lighting for day and night, created by lighting design expert Paul Pamboukian, will be used for the sculptures and special elements. ” The door-coachwoman will probably be a pretty exciting element that really welcomes someone and sets the scene,” he said.

The park will be open later this year.