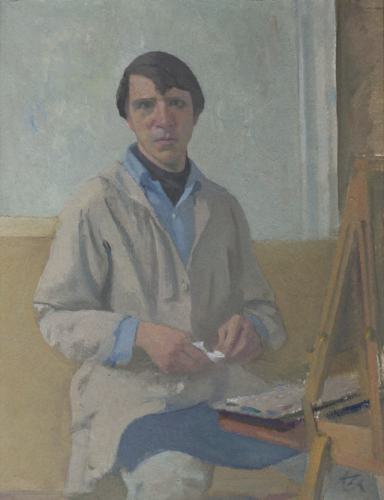 This ‘Self-Portrait’ by Lennart Anderson, c. 1965, oil on canvas, 10 x 13 in. from a private collection is on display at the retrospective exhibition of the artist’s work at Lyme Academy, which opens January 14.

OLD LYME – Friday, January 14, 2022, Lennart Anderson: A Retrospective opens at the Chauncey Stillman Gallery at the Lyme Academy of Fine Arts and is on view until March 18.

Described by the New York Times as one of the “most eminent and admired painters for translating figurative art into a modern idiom”, Lennart Anderson (1928-2015) was an American artist renowned for his mastery of tone, color and composition, and for a teaching career profoundly influenced future generations of painters.

A signature painting by Lennart Anderson; A retrospective exhibition is “Portrait of Barbara S. (the first)”, from 1972, (oil on canvas, 21 7/8 x 18 in. Private collection.)

Organized by Lyme Academy artistic directors Amaya Gurpide and Jordan Sokol, in collaboration with the artist’s estate and the New York Studio School, Lyme Academy will be the second location for this first major investigation into the artist since his died in 2015.

The exhibition brings together more than 25 paintings and drawings from public and private collections, including paintings from the Whitney Museum of American Art and the Bank of New York Mellon Collection, as well as Anderson’s own gallery, Leigh Morse Fine. Arts.

In addition to several works presented during the opening of the exhibition at the New York Studio School, newly selected works that highlight the artist’s sensitivity to portraiture and the intimate relationships he forged with his subjects will be presented. in the Lyme Academy exhibit.

“As a painter, I have studied Lennart’s work for years, so the opportunity to co-curate this exhibition was particularly meaningful,” says Sokol. “Lennart’s paintings brilliantly fuse figurative tradition with a modern sensibility, making his work particularly relevant to Lyme Academy, as well as to generations of painters after him.”

The exhibition is accompanied by a scholarly catalog that combines more than 50 color reproductions of Anderson’s work with essays by art historians Martica Sawin and Jennifer Samet and painters Susan J. Walp and Paul Resika. Catalogs will be available for purchase at the Lyme Academy of Fine Arts during the exhibition.

Lennart Anderson’s ‘Portrait of Mrs. Suzy Peterson’ (1959. Oil on canvas, 30 3/16 × 26 15/16 in. Whitney Museum of American Art, New York; purchased with funds from the Neysa McMein Purchase Award 63.49 ) will be exhibited in the retrospective exhibition of his work at Lyme Academy.

Born in Detroit, Lennart Anderson (August 22, 1928 – October 15, 2015) studied at the Art Institute of Chicago, Cranbrook Academy and the Art Students League under Edwin Dickinson. He was a member of the American Academy of Arts and Letters and the National Academy.

Anderson’s work is in the permanent collections of the Brooklyn Museum, the Cleveland Museum of Art; the Hirshorn Museum and Sculpture Garden, the Museum of Fine Arts, Boston, the Whitney Museum of American Art, the Pennsylvania Academy of Fine Arts, and the Delaware Art Museum, among others.

He has taught at Columbia University, Yale University, and served as Distinguished Professor Emeritus at Brooklyn College.

After its presentation at the Lyme Academy of Fine Arts, the exhibition will travel to its next location, the Southern Utah Museum of Art.

The Chauncey-Stillman Gallery of the Lyme Academy of Fine Arts is located at 84 Lyme St. in Old Lyme, Connecticut. Gallery hours are 10 a.m. to 4 p.m. daily. Admission to the exhibition is free, but donations are welcome. Free parking is offered on site.

The mission of the Lyme Academy of Fine Arts is to teach the fundamental skills of drawing, painting and sculpting in the figurative tradition. Through its commitment to training students in these skills and an engagement with contemporary discourse, the Academy will empower a new generation of artists. Through its programs, the Academy is committed to enriching the cultural life of the community.